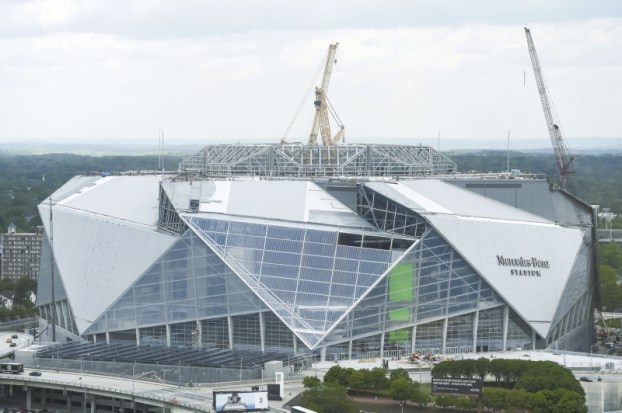 FILE -In this Tuesday, April 18, 2017 file photo, large cranes loom over the construction at the new Mercedes Benz Stadium, in Atlanta. The planned opening of the $1.5 billion stadium has been delayed. Stadium general manager Scott Jenkins told The Associated Press on Tuesday, April 25, 2017, that the building is 90 percent done, but the biggest holdup has been roof construction. (AP Photo/Mike Stewart, File)

ATLANTA (AP) — Workers are racing to complete Atlanta’s new $1.5 billion stadium project in the next three months after ongoing roof issues have delayed the facility’s opening.

Mercedes Benz Stadium general manager Scott Jenkins told The Associated Press on Tuesday that the building is 90 percent done, and “is looking great.”

The biggest holdup has been construction of the roof. Jenkins said the challenge with the roof has been installing the eight steel petals that would enable it to retract and open like a camera lens.

“The bulk of the building is done,” Jenkins said. “The big feature is the operable roof and that’s the hardest piece to do. It’s a gigantic structure that moves. So we’re finishing up the steel erection for that. Right now, we are putting on the last pieces of the tips of the operable petals. Then we’ll do the video board and finish the field.

“We are getting near the end.”

Jenkins expects the stadium to be completed by early August, in time for its new scheduled opening date of Aug. 26 when the Falcons host the Arizona Cardinals in an NFL preseason game.

In the revised schedule, Atlanta United’s first home date at the new stadium will be on Sept. 9 against Dallas.

The stadium had been set to open on July 30 with MLS Atlanta United’s game against Orlando City. That match has been moved to Georgia Tech’s Bobby Dodd Stadium.

Jenkins said the roof is “complex” and a “puzzle to solve.” Once that issue is resolved, plans call for a 63,000 square foot, 360-degree video board to be installed.

He is confident the stadium will be ready for Falcons games other sporting events.

“The critical path really goes through the operable roof, the halo board and the field,” Jenkins said. “Those are all going to go pretty quickly. So in the next three months, you’ll see it all come to a finish.”

Junior will leave a big seat to fill in No. 88 next season