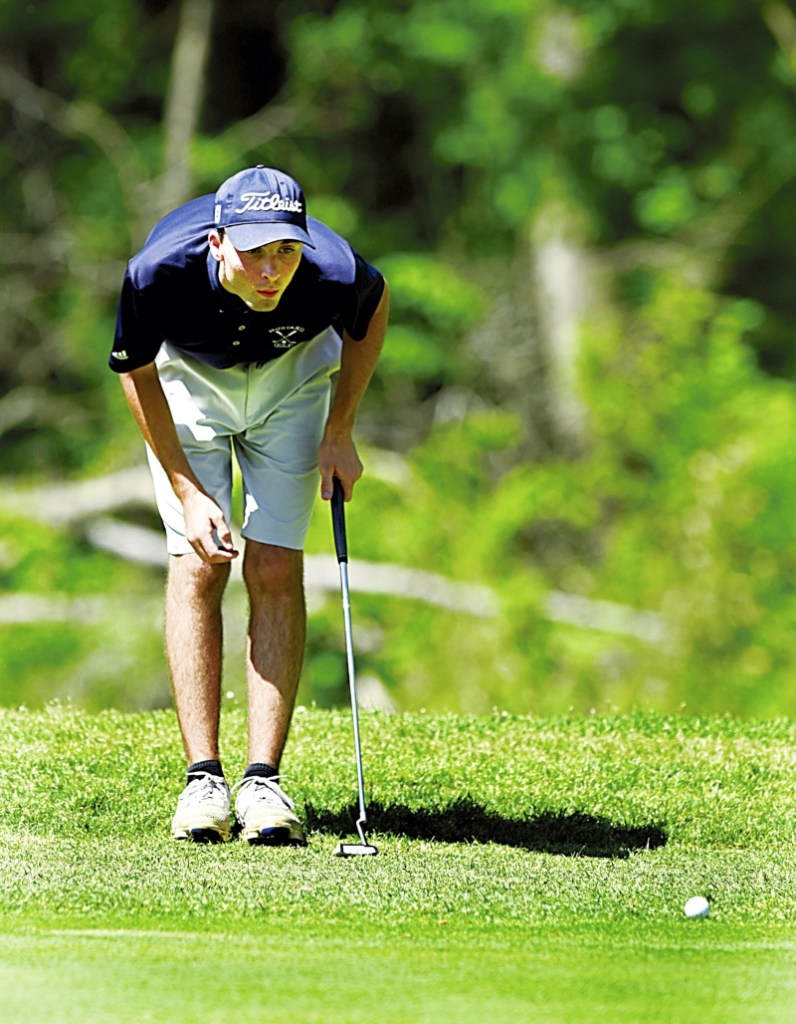 Wayne Hinshaw/for the Salisbury Post East Rowan’s Nick Lyerly lines up a putt on the 12th hole at Corbin Hills Golf Club, during Wednesday’s Rowan County Golf Championship. Lyerly was medalist with a 6-under par 66.

SALISBURY — Nick Lyerly and the East Rowan golf team made themselves right at home Wednesday afternoon at Corbin Hills.

Lyerly, a senior, earned medalist honors and the Mustangs — playing on their home course for the last time this season — captured their third consecutive Rowan County championship.

“We had to do it for Nick,” junior Will Garland said after East (302) bested runner-up South Rowan (320) and four other county schools for the title. “He’s been our backbone. It’s nice that he finishes on top.”

Lyerly was the lead float in the parade with a 6-under par 66, but had to out-stroke South’s Parker Chavis — the senior who made an eagle and five birdies and finished with a 2-under 70.

“I actually had the lead for about six holes,” said the Pfeiffer-bound Chavis. “I was feeling it for a while. But I lost focus, had a couple of bad swings and he (Lyerly) just made more birdies than me. He played very well.”

Lyerly got comfortable right away. He birdied four of the six holes he played and was 5-under after nine. By then Chavis was a stroke behind.

“Parker gave me a run for my money,” Lyerly said. “He still had a great round.”

Winning coach Rhett Teems spent much of the tournament concerning himself with next week’s Region XV showdown in Kannapolis. And though the Mustangs didn’t match the 291 and 295 team scores they carded the past two years, he was clearly pleased.

“A 302 isn’t bad,” he said with an early-evening smile. “Two years ago, we made the regionals with a 303. It’s a good, solid score. Shooting 302 today, going into the regional, that looks pretty good for us.”

It does. Joining Lyerly and Garland (76) on the all-county team was junior Bryson Sprinkle (76). Garland’s score was a an all-time best for 18 holes while Sprinkle used a back-nine turnaround to finish 4-over par.

“It was a good day for me,” Garland said. “I don’t usually shoot that low a score.”

Sprinkle, meanwhile, had another steady round. After starting on No. 6, he sandwiched putts for par at No. 17 and No. 1, around a dramatic eagle on the par-5, 425-yard 18th hole.

“I started out with a couple of pars, then got to hole 12, hit it right and had to take a lost ball,” he said. “I was able to salvage a double (bogey). Then I had to fight my way to 18 where I turned it around.”

Other East scorers were Austin Miller (84), Alex Miller (84) and Will Peeler (93) — a strong supporting cast for leading-man Lyerly.

“He knows this course, it’s his home,” said Teems. “But hey, he shot a 66 at the Warrior in the (SPC) conference meet two weeks ago. His game is on no matter what course he’s playing. Nick’s got an extra gear.”

“It’s fun to play golf,” said Raiders’ coach Steve Beaver. “But you know you’ve got to play well when you’re playing East. With Nick shooting low and Bryson shooting his score, they were just solid throughout.”

Chavis was spectacular, steady and precise — which is about as normal as cream cheese on a bagel these days. “He had two bad holes the whole day,” Beaver said. “The thing is, (Lyerly) doesn’t have any. There’s something special about him.”

Coward raised eyebrows with his out-of-left-field effort. He birdied the sixth, 11th and 15th holes.

“Fifteen was a tough one,” he said after beating the par-4, 376-yard challenge. “Uphill, dogleg right. I had to hit a good drive because that hole was dangerous left and right.”

Beaver likes Coward’s chances of catching the state-meet train. “If he plays like this in the regional, he will,” the coach said. “Now we know what he’s capable of doing.”

All eyes seem to be on the 3A Midwest Region championship, scheduled Monday at Irish Creek. The top three teams and six individuals will qualify for the state tournament May 8-9 in Pinehurst. … The 2A regional is May 2 at Oakwood Country Club in Wilkesboro. Salisbury previously qualified by placing second in the CCC tournament. The Hornets (345) finished fourth yesterday, led by junior Alex Antosek (77), freshman Hank Robins (82) and Simon Post (84). … Carson (344) placed third in the county. Low man was Zain Tucker (76), followed by Patrick Street (78). West Rowan (352) was fifth in the team standings and North Rowan (405) sixth. West’s top performer was Davis Tadlock, who recorded an 83. North was led by Will Anthony’s 95.