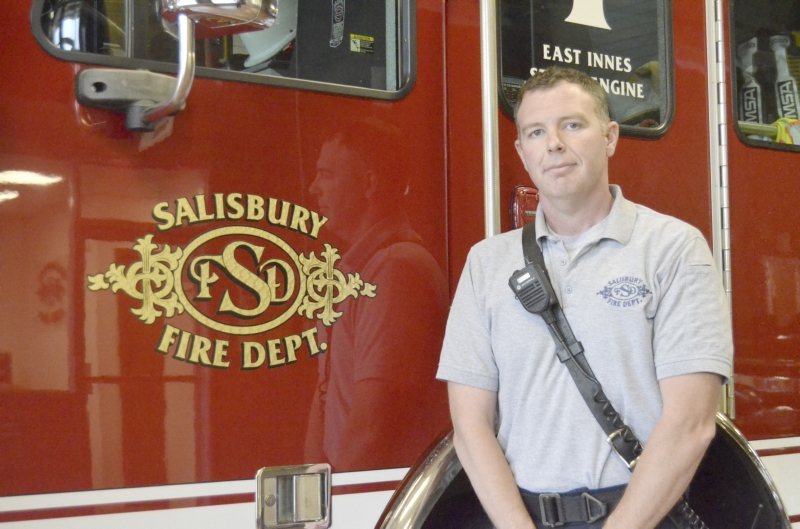 Salisbury Firefighter James Garris was recently off-duty when he saw black smoke billowing from a Durham apartment complex. He was visiting his girlfriend and saw the plumes of smoke. Garris, who has been in the fire service for 19 years, knocked on several doors to warn residents about the building fire and then assisted firemen on the scene. Shavonne Walker/Salisbury Post

The 19-year veteran firefighter had spent the day in Durham with his girlfriend and was heading back to her house about 3 p.m. when he saw the smoke. He had worked the night before at his job as an engineer with the Salisbury Fire Department.

He heard no sirens and pulled into Crystal Village apartment complex. He saw a woman on a cellphone who said she was calling 911. Garris told the woman that he is a firefighter and to tell the dispatcher it was a working structure fire and on the second floor.

When it wasn’t clear if the residents were out, Garris ran upstairs to the second floor. He checked the door and it was cold. He forced open the door and quickly reclosed it. Garris saw smoke, but no fire.

He searched the apartment but found no one inside. He left the apartment and shut the door behind him. He knocked on the apartment next door and a woman came to the door. He explained there was a fire next door. She got dressed and got out.

Garris went downstairs to the apartments below and realized the woman he’d seen in the parking lot lived there. No one else was inside. He went around the back upstairs of the unit and forced his way into another apartment. He yelled inside that the building was on fire, but no one responded.

After he had knocked on all the nearby apartments, Garris heard sirens. He told the first arriving fire personnel who he was, what he’d seen and what he’d done. He then walked to the back of the building to make sure no one else had gone back inside.

Garris spoke with a battalion chief, who thanked him. Before leaving, he helped a firefighter stretch firehose closer to the flames.

Garris left and later received a call from a fire investigator.

After the fire, Garris and his girlfriend went to dinner. Garris didn’t think any more about the fire until a letter arrived.

Acting Battalion Chief Richard Ray of the Durham Fire Department wrote that Garris demonstrated the “highest honor and traditions of the fire service.”

“I believe that the bravery he demonstrated while searching the apartment without any protective gear is what we are called to do as firefighters. Garris could have opted to avoid any risk and could have easily continued his day, but he did not. He gave of himself to help the citizens of Durham along with brother and sister firefighters that he did not know.”

The second-floor balcony fire was caused by a cigarette that wasn’t properly extinguished. The cigarette smoldered and ignited some items on the balcony.

Twelve people were displaced by the fire, but there were no injuries.

“There’s not a single person with this fire department that wouldn’t do the same,” Garris said.

He said it’s about helping people.

When Garris returned to work the following Monday, it was business as usual. He told no one of his heroic feat, instead recounting the weekend with his girlfriend.

“I’m very honored by that letter. That floored me. I was very humbled by it,” he said.

A couple used to giving feel blessed to be…