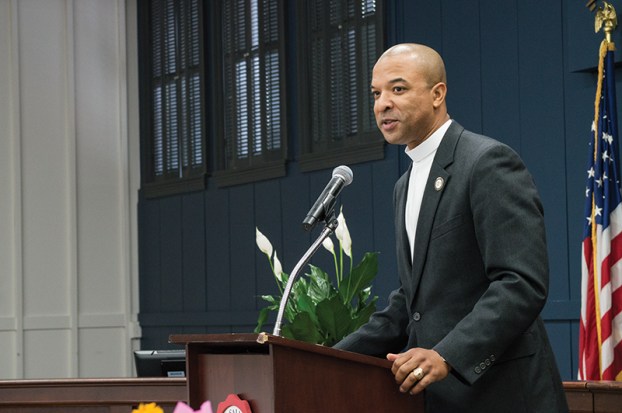 SALISBURY — Touting the importance of inclusivity, the Rev. Ken Walden on Tuesday encouraged people at the Mayor’s Spirit Luncheon to “pray for the city.”

Walden, an associate professor at Hood Theological Seminary, was the featured speaker at the luncheon in City Hall. He followed up his initial comments by speaking about the assets and diversity of Salisbury.

He said Salisbury has a rich history.

“Although we can celebrate a couple hundred years in the United States, when we look across the globe, and there are more than 200 countries around the globe, we find cities and countries that are several thousand years old,” he said. “So the question becomes: What kind of city do we want Salisbury to be as hundreds of years turn into thousands of years.”

In areas such as race relations, technology and inter-religious dialogue, there’s been “light-years of progress” since Salisbury’s founding in 1753, he said. Still, there’s progress to me made.

Just before Walden spoke, invocations were given from representatives of four religions — Buddhism, Judaism, Islam and Christianity. Walden said diverse prayers, such at those at the Spirit Luncheon, would not be permitted in some countries. Even in some American cities, prayers from four different religions may not be allowed at public gatherings, he said.

Walden said there’s an importance in “acknowledging and affirming” differences.

“There’s still an old adage that has validity — that variety is the spice of life,” he said.

He said Salisbury has a “growing tradition” of inclusivity. The city can continue to build on that to become one of the best cities in North Carolina and America, he said.

After Walden spoke, Mayor Karen Alexander said she thought his speech was particularly timely because of ongoing issues in the city.