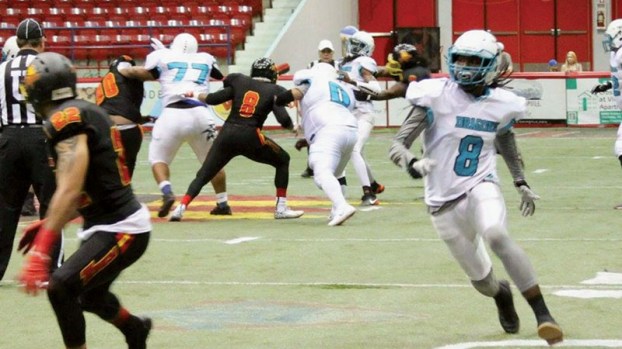 “Most definitely I love the game, and I want to stay on the field as long as I can,” said Ford, who now lives in Kannapolis.

Between football practices and games with the Greenville, S.C.-based Upstate Dragons, Ford works as a safety manager for Rowan Transit.

Beyond the field, Ford’s goal is to set a good example for three sports-minded boys, ages 7, 8 and 10. They’ve been able to attend two of his games this season, a trip to Fayetteville to play the Cape Fear Heroes, and a venture to Raleigh to take on the Triangle Torch. All Upstate games are road games. They are what is known in the SIFL as a “traveling team.”

Ford was a year-round athlete in his days at North Rowan, combining nice size (6-foot-3) with the startling leaping ability that made him a standout in football, basketball and track and field.

Ford had a 21-rebound game against rival Salisbury on the basketball floor. He was third in regional competition in the high jump as a senior and a state qualifier.

He blossomed his senior football season because he dedicated himself to preseason workouts following his junior year for the first time. In the first four games of the 2005 football season, Ford caught 29 passes from QBs Keegan Linza and Daniel Griffith. There was a two-week stretch against South Rowan and East Rowan in which Ford amassed 17 catches for 262 yards and four touchdowns. That production got the attention of Catawba College, and the Indians were genuinely excited when they signed Ford in February 2006.

Ford was with the Catawba football program a year, but he wasn’t academically eligible to play. A semester at Rowan-Cabarrus Community College was all he needed to get back on track, but money was tight, and Ford started to drift a bit.

“In those days I didn’t have the motivation to succeed in school without getting that push that came from playing sports,” Ford said.

Next came a brief stay at Louisburg College, followed by a semester at Livingstone College. But football eligibility remained elusive.

“That’s when I came to the realization that my football dream was probably over,” Ford said.

Ford had attended a tryout for the basketball team at Caldwell Community College & Technical Institute in Hudson, mostly as a lark. He went because a buddy was going. Ford played video games until 2 a.m. before showing up at Caldwell for a 9 a.m. workout. But Ford could sky, and he still made the cut.

“Then the same day I found out I wasn’t going to be eligible for football at Livingstone, I got a call from Caldwell asking me if I was coming to play basketball,” Ford said. “So I  just packed up my stuff, left football behind, and took a leap of faith. I had no clue what would happen next. I had no money. I had no place to live. I was out on a limb.”

Then it got scarier.

“I reported to the administration office at Caldwell, and I saw a newspaper on a table,” Ford said. “The big headline was ‘Cline resigns!’ And (Tim) Cline was the guy I was supposed to play for.”

Twenty-five players had reported. Briefly, the players had no coach, but then Matt Anderson, a local hero, took over the program.

“He put us through the toughest workouts I’ve ever had,” Ford said. “He almost killed us.”

Ford made the varsity team, but he spent some discouraging days at Caldwell, sleeping on a hotel floor and catching rides with teammates to the gym. He waited anxiously for financial aid to kick in. Finally, it did. Then he could afford a place to stay.

Ford performed well for two seasons, got his share of points and rebounds, and kept his grades up.

“It felt strange that when I finally got to play in college games, it was basketball, not football,” Ford said. “Football was my best sport.”

That was six years ago.

Ford’s last college classes were at Barber-Scotia in Concord, but the school was unaccredited. So a college degree is still on his bucket list. He hopes to earn the handful of credit hours he still lacks online.

“I’ve been accepted by online schools, but between football, my boys and work, there’s just not a lot of time now,” Ford said. “And I don’t want to start school again, until I know I can finish.”

In recent years, Ford got back on the football field and was a pass-catching force for local semi-pro teams — first the Rowan Rampage, and then the Kannapolis-based Carolina Thundering Herd and the Rutherford County Raiders. He played on championship teams with the Herd and Raiders.

“I played with Lance Lewis (a receiver for Concord High, East Carolina and NFL teams) on the Raiders, and we led all the stats,” Ford said. “The Herd won three championships when I was with them, and the Raiders lost one game in two years.”

Former teammates recommended Ford to the coaching staff of the Upstate Dragons. That opened the door for him to get his first taste of Arena ball.

“I’ve never really understood Arena football, and when some of my friends asked me about playing for the Upstate Dragons I was like, ‘Who are they?'” Ford said. “But I sent some film and the coach was on the phone with me two days later asking me when I was coming.”

On opening night, in a game at Crown Arena in Fayetteville, Ford had a 31-yard reception to set up the only touchdown for the Dragons.

“They threw me a long bomb,” Ford said. “That wall is really scary, but I went up and caught it.”

That was Ford’s welcome-to-Arena ball moment.

There probably will be some more big catches for Ford, who weighed 180 pounds in high school but now checks in at 210.

“I feel better now than I did in high school,” Ford said. “I’ve become a better player with experience, and whenever you make a team, it usually opens the door for another opportunity.”

Ford has already attended a tryout for the Atlanta Doom, a new franchise in the Professional Indoor Football League, and he survived the first cut. He’ll report to the Doom in late December, seeking to make the final roster. That would be a big step up in the Arena world.

“I’ve been disappointed a lot, so I’m not going to count my chickens before they hatch,” Ford said. “I’ve been trying to find my way in football for a long time.”

From staff reports Catawba’s baseball team will play on Friday at noon in first round of South Atlantic Conference Tournament in... read more