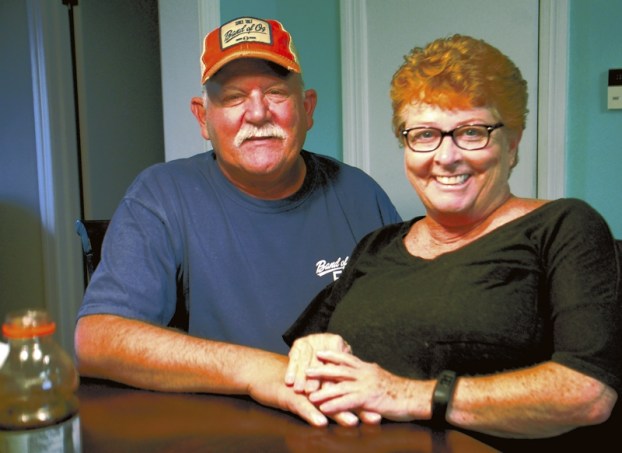 ROCKWELL — Mike Sifford complained of dizziness the morning of Nov. 17, but he headed for his job at Universal Forest Products as usual.

As she watched him leave, Becky Sifford couldn’t shake an instinct telling her something was wrong or a bit off with her husband.

She didn’t find out until later, but Mike’s trip to work was eventful. He kept missing his turns onto familiar roads and even drove by the entrance to Universal Forest. Mike was never late for work, but he was tardy that morning.

On the job, others noticed Mike was having difficulty speaking and kept dropping his clipboard. He sat in on a training session and later had hopped on a forklift to move a stack of lumber when fellow worker Jeff Holshouser stopped him and called for the safety supervisor.

The office tracked down Becky, and by the time she arrived, Mike seemed his normal self.

“He was back,” she said. “I just thought he was exhausted.”

The couple visited Mike’s physician nonetheless, and the inflammation in one of Mike’s ears led to a diagnosis of a bad ear infection. In hindsight, Becky would have questioned that conclusion harder had Mike shared the things that had happened to him earlier.

“I didn’t know all the facts of that morning,” Becky says. Again, she thought he was working too hard.

The rest of the day, Mike continued making preparations for an annual Thanksgiving trip to Lynch, Kentucky, where he is part of a church team cooking and serving needy families.

But the next morning, Mike couldn’t get out of bed. Becky knew he had suffered a stroke. She called 911 and kept comforting him until the emergency help arrived. At that moment, Mike had left-side paralysis and couldn’t walk or talk.

Mike and Becky Sifford are a couple who have always been on the giving end. Come Saturday, they will be on the receiving side when proceeds from the seventh annual Cruise ‘n’ Barbecue at St. Paul’s Lutheran Church help them with all the expenses they have faced in recent months.

For years, Mike Sifford has cooked things such as pork shoulders, butts, ribs, turkeys, sausage and hamburgers for numerous fundraisers.

He has been team captain for BJ and Friends and other Relay for Life teams that have raised more than $200,000 for cancer research. Through the Landis Reform Church’s “Community Feeds” in China Grove, Rockwell, Landis, Faith and Lynch, Kentucky, Mike has cooked for more than 5,000 people over the past five years.

When people have had accidents or families have lost everything in a fire or for other reasons, Mike has been the one preparing food and making his special barbecue sauce to help them.

A lover of beach music, he also has catered for the Rowan Shag Club Golf Tournament, which raises money for community projects. For 10 years, he has cooked for the SOS fundraiser at Ocean Drive Beach, raising money for the Carolina Beach Music Scholarship Fund.

At the Faith Fourth of July, Mike has grilled thousands of hamburgers as a volunteer for the Civitans, even though he doesn’t belong to the local club.

Though mostly retired now, Becky was known for more than 30 years through her Cuts by Sifford hair salons and wig boutiques, first on U.S. 29, then on Main Street in China Grove.

For 15 years in conjunction with the American Cancer Society, Becky helped women deal cosmetically with the side effects of chemotherapy.

Despite all they have done for the community, the couple have been a little uncomfortable about the church’s men’s group raising money for them. When Becky heard what was in the works, her first reaction was, “Mike’s not going to do that.”

She was right. If it was going to happen, Mike said, he wanted to give the money to Relay for Life. His friends eventually persuaded him otherwise, and now he accepts Saturday as one of those circumstances he might be able to pay forward in the future.

Becky becomes a bit teary-eyed thinking about this “huge and wonderful” thing the church men are doing. Her mother, sister and brother-in-law attend St. Paul’s Lutheran.

“It’s going to be a blessing,” Becky says.

Today, 62-year-old Mike Sifford has made great strides in his recovery. He rebounded quite well physically, but for lack of a better way to say it, his brain still has some catching up to do.

He has been relearning how to process things such as time, space and reality.

It’s a matter of getting sequences going, Becky explains.

Mike’s short-term memory is not there yet. He still struggles at initiating simple actions most of us take for granted. Things such as brushing his teeth, taking out the garbage and feeding the birds don’t come as easily as you would think, while other tasks — he is mowing, on a zero-turn mower, the big yard at the couple’s home off N.C. 152 — have come back to him.

As part of his occupational therapy, he’s working on word puzzles, games, balancing a checkbook and keeping up with a daily chore chart. He also sees a speech therapist.

An accomplished welder and someone who always worked two jobs and got out of bed at the crack of dawn, Mike now finds it hard to get moving in the morning and accomplish things that always have come easy for him.

“What she’s saying,” Mike says, nodding toward Becky, “is that I don’t do my honey-do list.”

Mike Sifford graduated from East Rowan High School in 1972. Over the years, he has worked for Kern Rubber, Carolina Stamping and Universal Forest Products.

Becky graduated from South Rowan High in 1976. The couple met at Rock Grove Church, and Becky says their marriage of almost 41 years has been “good and strong — period.”

Before they were married in the fall of 1976, the Salisbury Post chose Mike and Becky as its wedding couple of the year. As such, they were featured in a four-page section of the newspaper as they visited participating merchants, preparing for their wedding day and marriage.

Someone recently found that particular newspaper and delivered it to Mike and Becky.

The Siffords have a son and daughter, Ken and Wendy, and three grandchildren.

As if the Salisbury Post honor wasn’t enough, the couple also were named “Beach Music Fans of the Year” in 2005 at the Alabama Theater. “I was really bawling and crying that day,” Becky says.

The last six years have been stressful for the Siffords, who have been looking after parents, renovating a house and constantly on the go. “You don’t even think you’re going to have a stroke,” Mike says.

Mike acknowledges the frustration of walking his brain through various tasks. But more than anything, he misses going to work and seeing all the guys.

Meanwhile, many friends such as Chuck Misenheimer, Jeff Mills, Jerry Lambert, Gene Johnson and Short Lyerly have been checking in with him.

Becky sees the old Mike coming back and getting better each day. If they’re sitting close in the living room, he has returned to aggravating her by tickling her feet.

“We’re still very blessed,” Becky says. “I know one thing: If you don’t really love each other, it would be hard.”

In this photograph published in the Salisbury Post Nov. 9, 1969, Eloise Pethel, left, walks with two children on the... read more