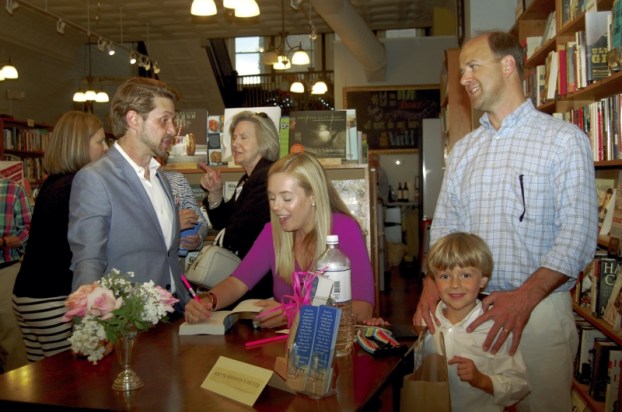 It was old home week for Kristy Woodson Harvey as she launched her new book, “Slightly South of Simple” Saturday night at South Main Book Co.

With her husband, Will, son little Will and parents Beth and Paul Woodson, she signed at least 70 books that had already been bought before the big event.

Then friends started pouring in, and most got a big hug from Kristy, an author who hasn’t forgotten the people she knew growing up.

First in line were a mother and daughter who had come in to buy the daughter a couple of books. Josie Fesperman, 8, and her mother Melissa Fesperman were at first so focused on Josie’s books that they didn’t notice Kristy dressed in a bright fuchsia dress at her signing table, but when Kristy started asking Josie about her books, her mother decided this was a great opportunity to get a signed book.

Kristy was sparkling even though she had 160 people at her house in Beaufort last night. When she went to the little town of Hoschton, Ga., there were another 160 people. “It’s been a fun week,” she said, and the book isn’t officially released until Tuesday.

This book, “Slightly South of Simple” is the first in a trilogy about three sisters and their mother, set in Peachtree Bluff, Ga., a made-up town that feels a lot like Beaufort, N.C.

Elizabeth Bauk got 22 books and wanted each one signed to give to her friends.

Linda and Bill Safrit came in and told Kristy they loved her books. Linda likes them because she can read them in spurts and still know what’s going on. Bill told Kristy he’d read all of her books.

Sara Cook, an avid reader and supporter of the arts, came to get her book signed. She has been at Kristy’s other signings through the years, and supports John Hart, as well. Hart’s mother, Nancy Stanback, came in for her book and to offer encouragement to Kristy, who said John had been great and had given her so much good advice.

As family friends and relatives came in, Kristy was having a good time catching up. Her mother’s sisters, Nancy Sanders and Cathy Singer, came in with their mother, Ola Rutledge, Kristy’s grandmother. Nancy ended up helping Kristy’s mother Beth add pink ribbon and packets of wildflower seed to some of the books.

In the back of the bookstore, Kristy’s father, former Salisbury mayor Paul Woodson, helped serve goodies like cucumber sandwiches and lemon bars. Current Salisbury mayor Karen Alexander also came by to get a book.

Between signing books, Kristy made a quick call to work out plans for a future event. “It’s all about the logistics,” she said. Much of the rest of her time was oohing and ahhing over special friends who came to support her.

Ann Lindsey Ellis came with daughter Mary Margaret to buy a book from her classmate’s daughter, too. Mary Margaret loves to write, her mother said, so she and Kristy had a good conversation about habits. Kristy is thrilled to hear that she wants to write and they discuss writing by hand versus on the computer. Kristy likes the laptop because she writes fast and can get all her thoughts down quickly.

As more friends came to see her, Kristy beamed at each one and thanked them for buying a book. She and John Hart have made the finalist list for the Southern Book Awards and she’s especially excited to have been nominated along with Ann Patchett. “It’s such an honor,” she said.

Her next book, the second in the trilogy, is with the publisher, and she’s working on book three. A big sign over the book store proclaimed, “Welcome Home Kristy Woodson Harvey.”

“It’s like I’m running for office,” she said, and laughed.

By Josh Bergeron josh.bergeron@salisburypost.com SALISBURY — It’s not quite as drastic as the title suggests, but a bill moving through the... read more