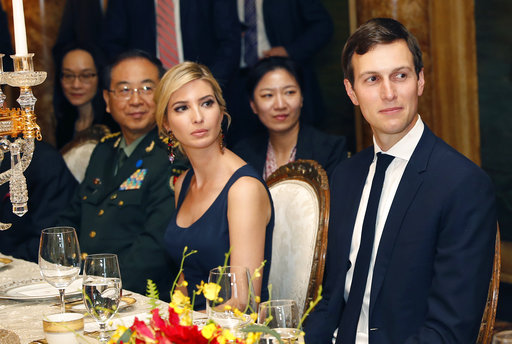 Is the president’s softened tone on China a strategic choice, or does it reflect his daughter Ivanka’s extensive business ties to the country? Was the early camaraderie between President Donald Trump and Japanese Prime Minister Shinzo Abe influenced by a business deal between Ivanka Trump’s company and a state-associated Japanese firm, after the president’s daughter sat in on a meeting with Abe? Probably not; yet such questions inevitably arise given the combination of Ivanka Trump’s business entanglements and her White House role.

The entanglements would have been concerning if she had never entered the White House. Playing both roles puts America’s reputation on the line. Foreigners must wonder: Is the United States a country where government actions are intertwined with the private interests of the president’s family? What does the United States surrender in ethical standing when the president’s daughter is both a close adviser and a businesswoman with operations that depend on the goodwill of foreign governments?

The Associated Press reported last week that “global sales of Ivanka Trump merchandise have surged and the company has applied for at least nine new trademarks in the Philippines, Puerto Rico, Canada and the U.S.” Ivanka Trump’s company secured trademarks in China on the same day she helped welcome Chinese President Xi Jinping to Mar-a-Lago on an official visit.

Ivanka Trump and her advisers say that she has relinquished most control over the business to a trust run by her family members. Why not just sell her business? Because, they may say, its value is based on her personal branding, so the Trump name and reputation would still be for sale.

Why not establish a blind trust? Because retaining some control allows her to reject potentially shady deals. Won’t she run afoul of White House ethics rules if she offers advice on, say, trade with China? Executive-branch rules have permitted certain conflicts of interest in the past, and she can recuse herself on a case-by-case basis.

For decades, the United States has advocated the principle that official corruption is a scourge to be stamped out, above all by isolating government from the private interests of those in power — and of their families. This principle is enshrined in the Foreign Corrupt Practices Act, which prohibits Americans from participating in the bribery that undermines so many foreign economies. The risk now is that the Trump administration will taint that advocacy, allowing foreign leaders to argue that the United States is no better than any Central Asian dynasty. Rather than defending a narrow legal case, the Trumps should be bending over backward to avoid any suggestion of hypocrisy.