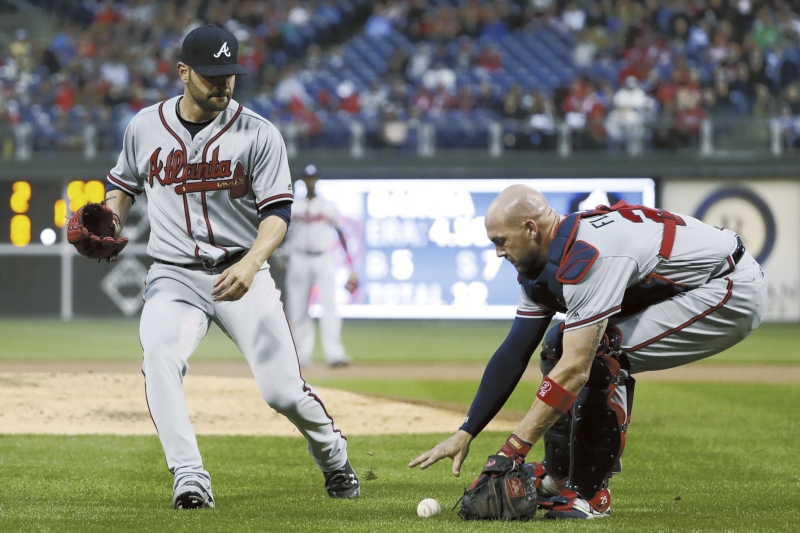 PHILADELPHIA (AP) — Maikel Franco rounded first base after his game-winning hit and kept running to right field, trying to avoid a celebratory beatdown from his teammates.

“Whitey got me this time,” Franco said of the playful punches he endured. “My body is killing me.”

Franco’s two-run single with two outs in the bottom of the 10th inning gave the Philadelphia Phillies a 4-3 win over the Atlanta Braves on Saturday night in a wild game that featured excellent defensive plays and some blunders.

“Wacky is the word of the day,” Phillies manager Pete Mackanin said.

Adonis Garcia’s infield single drove in the go-ahead run in the top of the 10th after Brandon Phillips hit a tying solo homer off Edubray Ramos with two outs in the ninth, but Philadelphia rallied against Jim Johnson (2-1).

The Phillies loaded the bases in the bottom of the inning on one-out singles by pinch-hitter Brock Stassi and infield hits by Cesar Hernandez and Aaron Altherr. After Johnson struck out Odubel Herrera, Franco lined a hit to deep right field.

“Just trying to have a good at-bat,” Franco said. “I got a good pitch to hit and that’s what happened.”

The Phillies have won four of five while the Braves have lost five straight after winning five in a row.

Jeanmar Gomez (2-1) allowed an unearned run in the 10th but earned the win.

Mackanin chose to use Ramos to protect a one-run lead in the ninth because Hector Neris, who closed out the past two games, and Joaquin Benoit were unavailable. Ramos was seeking his first career save.

“They thought the game was over and we ended up coming back,” Phillips said. “We just didn’t close it out. It just (stinks) to lose a game like that.”

“I had my stuff,” Eickhoff said.

Hernandez started Philadelphia’s rally in the sixth with a leadoff single against Garcia. Altherr then lined a double to left field and Herrera hit an RBI single up the middle to tie it at 1. Franco’s fielder’s choice grounder scored Altherr to give the Phillies a 2-1 lead.

Jake Arrieta (3-0) returned to the mound where he threw his second career no-hitter last April 21 and struggled mightily at the outset, giving up two homers in the first inning. Chicago’s offense pulled him through with another homer-heavy game at Great American Ball Park. Arrieta helped with an RBI triple.

Koda Glover, the fourth Washington pitcher, completed the combined two-hitter by getting the last out for his first big league save.

Jacob deGrom (0-1) struck out 10 and walked six in 5 2/3 innings. He was supposed to pitch Friday night, but was scratched with a stiff neck.

Carter sent the first pitch he saw from Rivero (1-1) into the bullpen beyond the center field fence for his first homer with the Yankees. Starlin Castro added a three-run shot of his own and Aaron Judge hit his team-high sixth home run for New York. Ronald Torreyes had four hits and two RBIs.

The two hottest A’s hitters quickly got to Ariel Miranda (1-2). Rosales led off with his second homer, and two batters later, Healy hit a two-run shot, his third this season and first since April 6.

Cotton (2-2) gave up two runs and six hits. Ryan Madson got four outs for his first save.

Beckham, who tripled and singled in two at-bats against starter Charlie Morton (1-2), drove in a run with his single in the sixth off reliever Will Harris. Evan Longoria had a two-run double for the Rays, who have won four of five.

Austin Pruitt (2-0) got the win after 2 1/3 innings of hitless relief. Alex Colome pitched the ninth for his fourth save.

BALTIMORE (AP) — Just when it appeared Steven Wright had finally gained command of his fluttering knuckleball, the Baltimore Orioles found their groove.

The result: Another early exit for the 2016 All-Star in Boston’s 4-2 loss Saturday night.

Baltimore will seek to complete a three-game sweep on Sunday. The Orioles have not lost a series this year and own the best record in the majors (12-4).

“Obviously, I felt pretty good at the beginning and then one inning got away from me,” Wright said. “They hit mistakes. That’s what makes them good.”

In just under 18 innings this season, Wright has given up seven homers and 17 earned runs.

“It’s not as unpredictable this year as it was last year,” he said of his knuckler. “It’s not really moving.  I am trying to get the violence back into the pitch.”

After breaking into professional ball with the Rockies’ organization in 2010 and bouncing from one minor league team to another, Aquino just might have found a home.

“It’s been a tough process. I’ve been through a few organizations right now,” he said through a translator. “But I’m just thankful to the Orioles for this opportunity and allowing me to start a game at the major league level.”

Mychal Givens pitched two perfect innings, Donnie Hart got two outs in the ninth and Darren O’Day finished for his first save.

Jackie Bradley Jr. homered for the Red Sox, who were without injured second baseman Dustin Pedroia.

Bradley put the Red Sox up 2-0 in the third with his first home run, a shot onto Eutaw Street beyond the right-field scoreboard. Boston came in with only seven home runs, fewest in the big leagues.

At that point, it appeared Wright was more than capable of protecting the lead. But he never made it out of the fourth.

“On a night when we’re scuffling to put points on the board, that four-run inning looms large,” Boston manager John Farrell said.

The big hit was delivered by Mancini, whose team-high fifth long ball of the year soared into the seats in left-center. He has eight homers in 17 big league games over two seasons.

Two of them came against Wright, including one in that April 12 game.

“He was a little more on today, I’d say, especially early on,” Mancini said of Wright. “Luckily, my second at-bat, he just left one up that I put a good swing on.”

Orioles catcher Caleb Joseph snapped an 0-for-23 skid with a third-inning single and added a double in the fourth.

Joseph’s slump began last September and included 12 at-bats this season. He’s still looking for his first RBI since the 2015 season.

Red Sox: Pedroia missed the game with a sore left knee and ankle but hopes to return Sunday. The injuries occurred when he was spiked by Manny Machado on Friday night.