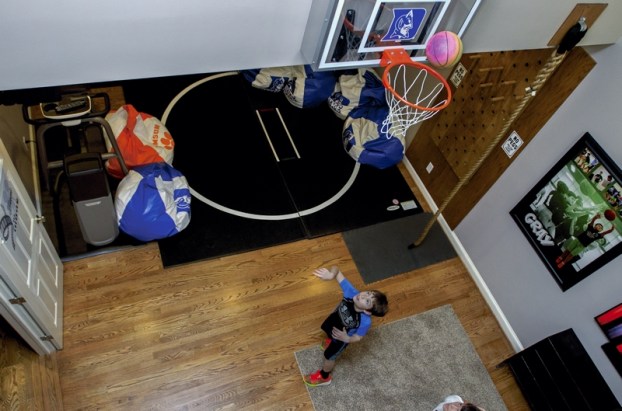 Bryant Davis, left, 8, shoots a basket as he plays basketball with his brother Gray, 10, in their new remodeled room ‘The Clubhouse.’ KRISTI CRAVEN/ SALISBURY POST

A place for family, friends to just be together A spiral staircase leads to a loft where the kids can play games, including a Foosball table, in their new remodeled room ‘The Clubhouse.’
KRISTI CRAVEN/ SALISBURY POST

SALISBURY — The Davis children — Maddie, 14, Gray, 10, and Bryant, 8, don’t really have to leave home for fun if they don’t want to and that’s exactly how their father, James, intended. The single father wanted a space for the children, their friends and even the grandchildren to be able to play, exercise, watch movies and yes — do homework. After months of weekend planning sessions, construction challenges and custom furnishings the “Clubhouse” is complete.

It’s just 800 square feet, but there’s more packed into the tiny space than if it was twice the footage. Davis, a Rowan native and a criminal/civil attorney, decided to turn a small attic space that held an air conditioning unit in his townhouse into a clubhouse for the children.

“I wanted my children to have a safe place to play,  something that was fun where other kids could come to spend the night,” James Davis said.

The Clubhouse as the Davis kids have dubbed it, features an athletic section with a basketball goal, pull up bars, elliptical machines, a wrestling mat, climbing rope and a climbing pegboard; a lounge area for movies or television, a custom study area and upstairs/loft area with a foosball table and a card table.

The room also has a mini fridge, freezer for ice cold drinks and a microwave. During holidays and weekend sleepovers the Davis family could have up to 10 children in the house at one time.

“The room is cool,” James declared.

The room was designed by Karen Alexander with KKA Architecture and contracted by Jon Laws of Paragon Construction, both of whom worked with Davis and the children to customize many of the special features of the room and other parts of the house.

Alexander said there were weekend meetings, text messages and emails about certain elements of the room. She said if there was a specific concept that the family wanted and they weren’t able to find, contractor Jon Laws built it.

“Jon is very artistic,” she said.

She said one of the most important detail to note about the room was that it was a place for family, friends to just be together, “this world is about people not things.”

“That’s what this space is about learning social relationships, making them good human beings,” Alexander said of the children.

James said they crafted ideas as they went along with tidbits from himself, the children, and both Alexander and Laws.

The Davis children, all of whom play basketball, made sure the plans included a basketball hoop.

“It definitely met my expectations. It was very well thought out. Every single thing was thought out. It provides good family time,” Maddie said.

Gray said the room is 10 times better than he ever thought it could be.

James wanted to inspire his children with placing positive quotes and scriptures on the walls throughout the room.

The construction project also included installing hardwood floors, placing a customized trophy cabinet, and renovating a few other areas of the home including the boys’ room.

The project is really 90 percent to 99 percent done with a possible secret passage built into the walls to connect the clubhouse to the kids rooms in the future.

“It was a great experience. I’m just so excited,” James said.

If you were to ask a typical college student about spring break you would most likely encounter a huge... read more