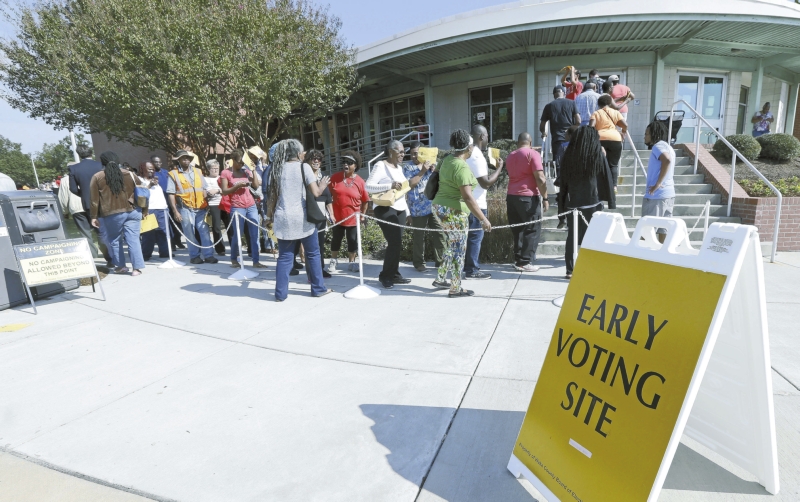 n this Oct. 20, 2016, file photo, voters line up during early voting at Chavis Community Center in Raleigh. According to an audit released Friday, North Carolina elections officials found that about 500 ineligible voters cast ballots in the 2016 general election — but not enough to change the outcome of any race. AP Photo/Gerry Broome

RALEIGH — North Carolina elections officials found that about 500 ineligible voters cast ballots in the 2016 general election — but not enough to change the outcome of any race, according to an audit released Friday.

The State Board of Elections report said the 508 cases — the vast majority active felons — represents a small fraction of the 4.8 million ballots cast. The report didn’t include any evidence of coordinated fraud, and many of the voters claimed to be confused about their eligibility.

“That’s 508 ineligible votes, so that’s something that is never going to be acceptable,” the board’s executive director, Kim Strach, said in an interview. “But the perspective is the number of people that we had vote in this election was unprecedented, and it’s a tiny, tiny, tiny fraction.”

The audit comes amid scrutiny of voting practices in North Carolina and around the country, with President Donald Trump recently claiming without evidence that scores of immigrants voted illegally nationwide. The North Carolina audit confirmed 41 votes by noncitizens.

The report said the board expects to refer all 441 cases of active felons voting to local prosecutors who will decide whether to pursue charges. Under North Carolina law, convicted felons must complete any probation or parole before they have the right to vote again.

Statewide elections software will be updated this summer to improve electronic checks on felony status at the time of registration, and the report recommends better education for those who haven’t finished all aspects of their sentences. The state is also revising voter registration forms to require applicants to check boxes verifying that they are citizens and not active felons.

The state didn’t have comparable figures for ineligible voters in the 2012 election because the board didn’t do the same kind of study that year, spokesman Pat Gannon said.

The cases were spread around the state. Guilford County, home to Greensboro, had the most at 63. In the Raleigh area, Wake County had 36, while neighboring Durham County had 34.

Rowan County had three cases, all felons who voted. Cabarrus had a total of eight cases, six felons and two noncitizens. Davie County had one case, a felon.

Two other violations involved people voting on behalf of relatives who died before Election Day. Both people, whose names were redacted, said they picked Republicans.

One told a Board of Elections investigator in an email that her 89-year-old mother gave the following instructions before she died: “She said, ‘OK and if anything happens you have my power of attorney and you be sure to vote for Donald Trump for me.’”

Republican Senate leader Phil Berger responded to the report by saying that even a single fraudulent ballot “is one too many, and that’s why we continue to support common-sense policies like voter ID that improve voter confidence.”

But Bob Hall, executive director of voting rights group Democracy North Carolina, said most cases in the report appear to be mistakes, not fraud. He noted a number of other states allow felons to vote while on probation.

“We don’t want the report used to fan the hysteria about voter fraud or to justify irrational barriers to voting,” he said.

Voting practices in North Carolina were questioned by Republican activists during the close governor’s race that was decided by just over 10,000 votes.