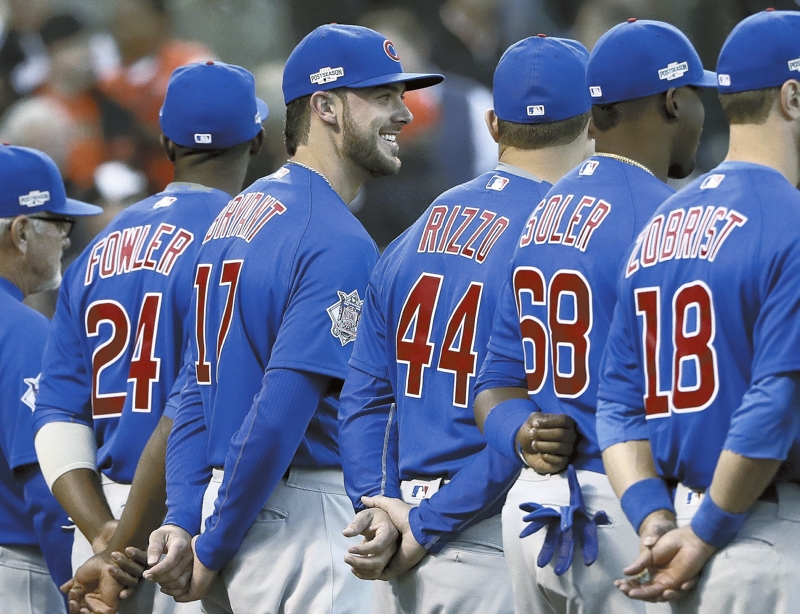 The commissioner’s office and players’ association also said Friday that the Cubs had four of the five most popular jerseys following their first title since 1908.

The average age of players in the top 20 is 26.5, more than 1.5 years younger than any previous list.

Josh Bell hit his second home run in as many games, and the Pittsburgh Pirates got to Sabathia early for a 6-3 win over the New York Yankees on Friday night.

Jordy Mercer turned an 86 mph fastball from Sabathia (2-1) into a solo shot leading off the bottom of the first. Bell, a switch hitter, followed an inning later by taking an 87 mph cutter and sending it to the left field bleachers for a two-run homer , his first from the right side in his brief career.

NEW YORK (AP) — Bryce Harper got off to a loud start, tagging a longtime nemesis. Way later, he enjoyed another trot home.

Harper homered early, then doubled and scored the go-ahead run in the 11th inning on a bases-loaded walk by Jeurys Familia, sending the Washington Nationals over the ailing New York Mets 4-3 Friday night for their fifth straight win.

CINCINNATI (AP) — With another dramatic homer, the Cubs showed they are still masters of the big comeback.

Anthony Rizzo tied it with a two-out, three-run homer in the ninth, and Kris Bryant hit a sacrifice fly in the 11th inning on Friday night, rallying the Chicago Cubs to a 6-5 victory over the Cincinnati Reds, a team they’ve dominated the last few years.

PHILADELPHIA (AP) — Jeremy Hellickson confounds hitters with a soft-tossing strategy that is as much necessity as preference.

Hellickson pitched seven strong innings and Cesar Hernandez had three hits and scored two runs to lead the Philadelphia Phillies to a 4-3 victory over the Atlanta Braves on Friday night.

Freddie Freeman and Adonis Garcia homered for the Braves, who have dropped four straight after sweeping four games from San Diego.

“I just kind of feel like we’re a tick away from something really good happening,” Braves manager Brian Snitker said. “We just got to keep playing. I don’t think we’re that far off.”

Hector Neris gave up a leadoff home run to Garcia in the ninth and waited out a 24-minute rain delay before recording his second save in as many tries.

BALTIMORE (AP) — If not for the image of Dustin Pedroia limping off the field with the aid of the Red Sox training staff, the talk in both clubhouses probably would have centered on the outstanding pitching performance of Dylan Bundy.

Bundy took a five-hitter into the eighth inning Friday night, yet the buzz after Baltimore’s 2-0 victory centered on Pedroia’s unexpected exit in the bottom half.

Pedroia, a four-time All-Star, left after hurting his knee. The injury occurred when Manny Machado slid into second on a force play and spiked Pedroia in the back of the left leg.

“If the rule is in place to protect the middle infielder, then it didn’t work tonight,” he said. “It was a late slide.”

Pedroia walked around the clubhouse with just a faint hint of a limp.

“I just got caught in a weird position. I don’t know what hit the side of my knee … it kind of pushed it in a little bit,” Pedroia said. “I’ve turned double plays in the big leagues for 11 years. It’s my job, and it’s not the first time I’ve been hit and it won’t be the last. It’s baseball, man.”

Machado sent Pedroia a text, explaining he meant the second baseman no harm.

“You don’t want that to happen. I went and tried to grab him as soon as I can,” Machado said. “The intention wasn’t there. You can just see it.”

It was the seventh win in nine games for the Orioles, whose major league-best 11-4 record includes a 9-3 mark in the AL East.

Bundy (3-1) struck out three, walked one and allowed six hits in seven-plus innings. The 2011 first-round draft pick lowered his ERA to 1.37 and extended his run of consecutive scoreless innings to 13.

“It was a tough one,” Bundy said. “I got some double play balls that my defense helped me out on and got me out of some jams.”

After Bundy yielded a leadoff single in the eighth, Donnie Hart walked pinch-hitter Chris Young before getting two straight outs. Mychal Givens then retired Orioles nemesis Mookie Betts on a popup with runners on the corners.

Brad Brach worked a perfect ninth for his third save — all in the past three nights. Brach is subbing for All-Star closer Zach Britton, who’s on the disabled list.

Seeking their sixth win in seven games, the Red Sox managed only two hits over the final six innings. Betts, who went 0 for 4, had at least one hit and one run scored in each of his previous 11 games at Camden Yards.

Bundy gave up a leadoff single in each of the first three innings, and each time he avoided damage with a double-play ball.

Baltimore took the lead in the third when Craig Gentry doubled and scored on a single by Adam Jones.

Machado made it 2-0 in the fifth, launching a 2-1 pitch for his third home run.

Boston LHP David Price threw 30 pitches in a side session at Camden Yards and said he felt no discomfort. Price, who was shut down in February with a sore left elbow, likely will throw another side session either Monday or Tuesday.

Red Sox: Pablo Sandoval filled in at second after Pedroia left. … Utility player Brock Holt was placed on the 10-day DL with vertigo. … SS Xander Bogaerts wasn’t in the starting lineup Friday after jamming his left thumb on a slide into second base Thursday. He entered as a defensive replacement in the eighth inning.

Orioles: Britton had an MRI on his left forearm and elbow. “Looked good. They did everything. Elbow looked really good,” manager Buck Showalter said. …  OF Seth Smith (strained right hamstring) showed improvement Friday, so the team delayed a decision of whether to put him on the DL.

Orioles: LHP Jayson Aquino gets his first major league start after pitching in three games as a reliever last season.