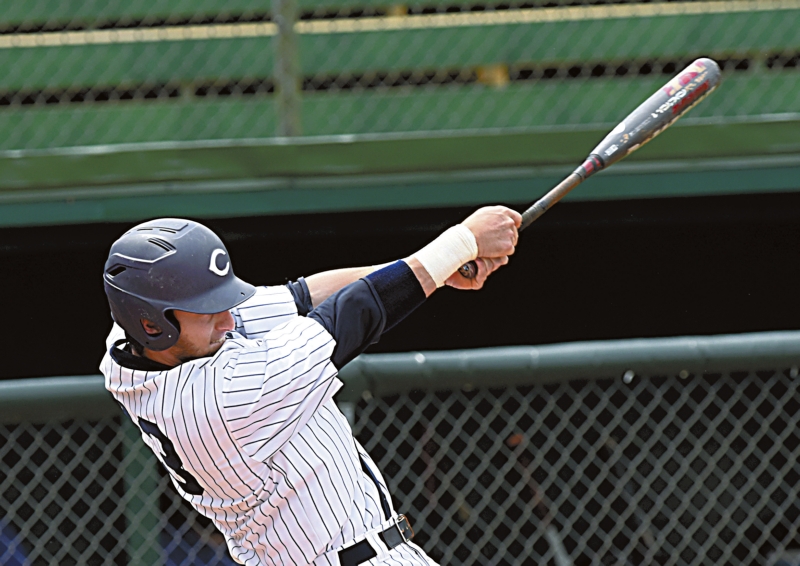 Wayne Hinshaw/for the Salisbury Post ... Catawba’s Zac Almond connects on one of his three homers Saturday afternoon, as the Indians swept a doubleheader from Brevard, winning the SAC championship.

But Almond downplayed his huge day.

Led by Almond, Catawba (35-12, 19-5 South Atlantic Conference) pounded outmanned Brevard, 16-9 and 13-3, in front of a large crowd at Newman Park and won a fifth straight league title. The Indians became outright champions and No. 1 tournament seeds when second-place finisher Lincoln Memorial dropped the nightcap of a doubleheader at Anderson.

Catawba got a pair of homers from Almond in the first game and Chance Bowden and Kyle Smith also connected. Catawba’s nine-run third inning left no doubt about the eventual outcome.  It was 15-1 at one point, although Brevard didn’t quit.

“At least we fought back and made it more respectable,” said Brevard senior infielder Parker Hubbard, who starred at South Rowan High.

Fighting back late created momentum for the Tornados (10-26, 3-21), and they carried it over to the second game. Brevard launched two first-inning homers off Catawba starter Bryan Ketchie, and with the Indians in a 3-0 hole an with only one out in the first, coach Jim Gantt turned to Connor Johnson.

“It just wasn’t Ketchie’s day, and it was a short leash with the team playing for a championship,” Almond said. “Connor came in, and he was big-time.”

Johnson (7-1) not only got Catawba out of the first inning, he put up zeroes in the second, third, fourth and fifth. He escaped a bases-loaded jam in the fourth, getting the inning-ending strikeout on a tight  breaking ball.

“I knew I was going to be first out of the pen and Coach Gantt had told me to be ready,” Johnson said. “After the first homer, they sent me to the bullpen. Not long after that, I was in the game. It was quick, I had only a short time to warm up, but I used my eight warmup pitches well.”

The pivotal half-inning arrived early — bottom of the first. Down 3-0, the Indians really needed to get something on the board. They almost didn’t. There were two outs with nobody on after  Jeremy Simpson rapped into a double play. But Almond was hit by a pitch, Smith walked, and Bowden’s line-drive single to right — he hit it too hard for Almond to try to score — loaded the bases for Malachi Hanes, a slugger who is one of Catawba’s three seniors.

“I know people think we started out sluggish in the second game, but we really didn’t,” Hanes said. “We were focused. We knew exactly what the stakes were.”

Hanes got down 0-and-2, but he took pitches and fouled off pitches to get back to a full count. Then he spit at ball four, outside, for one of the best walks of his career. Almond trotted home, and it was 3-1.

“I stayed alive by fouling off some pretty good curveballs,” Hanes said. “Finally, I got a walk. I wanted to do my part.”

Bryce Fowler, another senior, followed Hanes. He also got into an 0-and-2 hole, but he also refused to lose the at-bat. Finally, he sprayed a two-run double that sliced toward the right-field line. That made it 3-3, and Catawba, with Johnson blowing away the Tornados for seven strikeouts, was no longer in serious danger.

“Johnson was the difference in the game,” Gantt said. “He was a good matchup for Brevard’s lineup.”

While Almond, a junior, swatted his 15th, 16th and 17th homers, the loudest cheers were for the three seniors — lefty Russ Weiker and outfielders  Hanes and Fowler — who are entering the last lap of fine careers.

Weiker (3-3) was the starter and winner in the first game, striking out five and pitching into the seventh inning.

Freshman third baseman Jackson Raper homered for a 5-3 Catawba lead in the second inning. Almond’s two-run shot made it 8-3. Bowden, who had three hits, doubled for a 9-3 lead. Luke Setzer had a two-run to make it  11-3.  Hanes, a 180-pound guy who has stunning, left-handed power,  crushed a two-run homer to right to finish Catawba’s scoring.

The rain held off and it turned out be a day for sunshine and applause. Next is the SAC tournament in Kodak, Tenn. Catawba’s first game will be Friday.

“There was a time when I couldn’t have imagined us ever being good enough to win five straight championships,” Gantt said. “This was one of the toughest because we were on the road against most of the good teams. We came back late to win at Mars Hill and Tusculum. That made all the difference.”

Salisbury is blanked by West Davidson