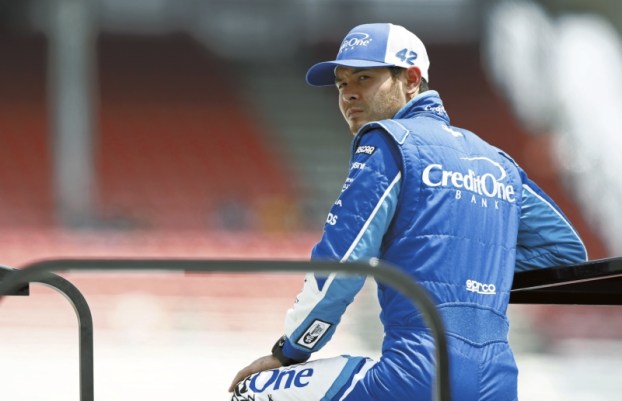 Driver Kyle Larson watches during practice for a NASCAR Xfinity Series auto race, Friday, April 21, 2017 in Bristol, Tenn. NASCAR officials announced because of weather, the field for Sunday's Monster Cup race will set by points. Larson is the current points leader and will be on the pole. (AP Photo/Wade Payne)

Busch and Gibbs team hope for breakthrough at Bristol

BRISTOL, Tenn. (AP) — Joe Gibbs Racing had three victories at this point last season, including back-to-back wins by Kyle Busch. Then Carl Edwards reeled off consecutive victories and the organization was easily the best in NASCAR.

Now? The team is winless through the first seven races of the season and looking to break the drought at Bristol Motor Speedway.

“I would have to say that obviously we’re not as strong this year out of the gate,” Busch said Friday. “I feel as though we’re competitive and we’re close, but we’re not there. I don’t think there’s any reason for cause for concern yet.”

The speed chart Friday indicated JGR may be on the right track.

Toyota drivers took five of the first six spots in practice, three from JGR and two from sister team Furniture Row Racing. Denny Hamlin and Busch had the best 10 consecutive lap averages, the true indicator of who has the strongest cars.

It was an important showing because the weather forecast for Bristol this weekend calls for rain and no one is certain when the cars will next be on track. So most of the field treated Friday as if it was their only time to prepare for Sunday’s race.

Qualifying was canceled because of early rain at the track, and the field was set by points. It gave Kyle Larson the pole with Chase Elliott right next to him. The JGR cars will start seventh (Busch), 16th (Hamlin), 22nd (Matt Kenseth) and 23rd (Daniel Suarez).

Busch is a five-time winner at Bristol, but hasn’t been to victory lane in his Cup car since 2011. He thinks the drop-off is a combination of changing track conditions, team issues or unexpected failures.

“A couple other runs that we’ve had here we’ve been OK, maybe third or fourth, and I try something and I lose the nose,” he said. “It’s just been frustrating the last few times of coming here and not really having the speed in order to run up in the lead and lead a lot of laps like I used to. … We were pretty dominant force and that’s kind of gone away and it would be nice to get those days back in the 18 camp.”

He’ll certainly have competition. He listed Larson, Elliott, and Team Penske teammates Brad Keselowski and Joey Logano as the biggest threats, but noted that he goes into the race certain he will be the victor.

“That’s why the competition is tough because there’s five guys, maybe even seven guys that can walk in here this weekend thinking this is our weekend to get a win. We have to fight those guys in order to go out there and get the win for ourselves.”

Larson, the points leader, loves his chances. He’s already got one win this season and his front-row starting spot has him certain he can have a strong race.

“It’s nice to be the point leader and be starting up front, I always race really well here,” he said. “I just don’t qualify well.”

LARSON STARTS ON POLE WITH BRISTOL QUALIFYING RAINED OUT

BRISTOL, Tenn. (AP) — Kyle Larson will start on the pole on points because rain washed out qualifying at Bristol Motor Speedway.

Larson won at Fontana from the pole in the No. 42 Chevrolet and started first a week later at Martinsville.  He has five top-two finishes in just seven NASCAR races this season.

The Cup series returns after its first off week of the season.

NASCAR scrapped qualifying Friday because of the rain that hit that track and could be a problem all weekend. The field is set by owner points.

Sankey refuses to step down in UNC fraud case