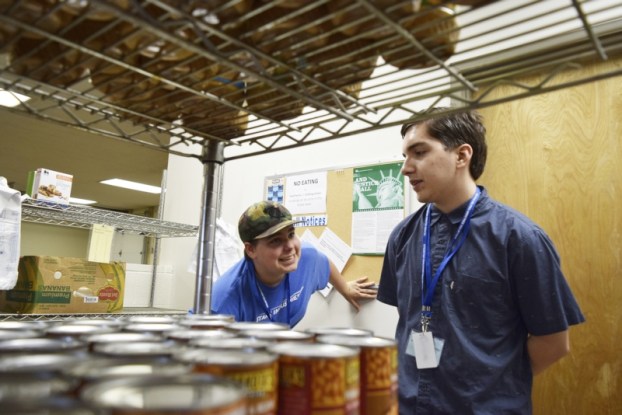 SALISBURY — While some students are taking advantage of spring break to race off to the beach or the mountains, some chose to invest their time in other ways.

Instead of spending time in the sun, the past few days have found Xavier McLaughlin and Cameron Marsh, two high school students, in the food pantry at Rowan Helping Ministries. The two organize donations, fill shopping carts with orders and help patrons load groceries into their cars, reusable bags or boxes.

Cameron said when he works at the food pantry, he knows he’s not just filling people’s shopping carts — he’s filling their stomachs, as well.

Cameron is a sophomore at Carson High School who’s been volunteering in the food pantry for the past two years. He started helping out alongside his grandmother in order to meet volunteer requirements for the Crosby Scholars program. Pretty soon, he found he enjoyed the work. And he likes helping people, as well.

After two years, he knows the ebb and flow of the pantry — and how slow mornings can turn into fast-paced afternoons. Once he logged more than 48 volunteer hours over the course of a summer.

Sometimes he’ll count those hours toward the continuing Crosby Scholars requirements. But sometimes it’s just where he’d rather be.

“Sometimes I’ll come because I have nothing else to do besides sit at home and play video games,” he said.

Volunteering at the food pantry has become habit for Cameron during spring and summer break. But this week he was joined by a new face, Xavier McLaughlin.

Xavier, 18, is a senior at West Rowan High School who’s working on his senior project. The project, assigned to all Rowan-Salisbury seniors, requires students to write a long paper, do research and log several hours either volunteering or working with a mentor.

Students can choose a topic from one of three areas: hobbies, a career field or community service. Xavier chose community service and decided to focus on homeless shelters. He said he found Rowan Helping Ministries through a Google search and applied.

Thursday was Xavier’s second day at the food pantry. He doesn’t need many hours for the project, but he said he’d already learned a lot.

Before working with Rowan Helping Ministries, Xavier said he had no idea how many people are in need of food and clothing assistance in the county. If he’d had to guess, he would have said not many. But that, he discovered, was wrong.

Those in need of food assistance are able to come by once a month and load up a grocery cart full of items according to how many people are in their household. The amount of food in a single cart can exceed 100 pounds — all of which is weighed and accounted for.

Xavier doesn’t know if he’ll return after he completes his senior project hours, but he has enjoyed his time working with the nonprofit group, and it’s certainly been eye-opening.

“They help a lot of people here,” he said.

By Rebecca Rider rebecca.rider@salisburypost CLEVELAND — There’s a lot of history on the grounds of Third Creek Presbyterian Church. The sanctuary... read more