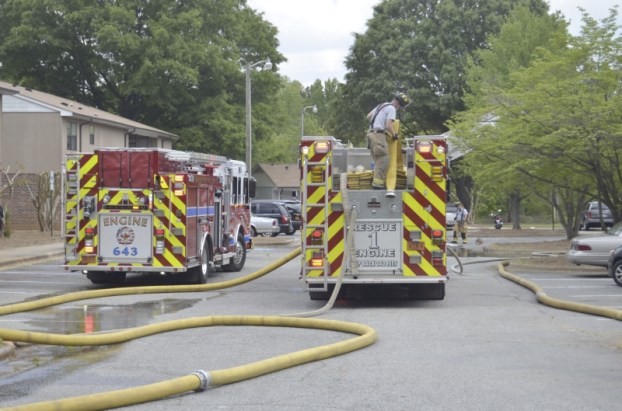 Multiple fire departments responded to an apartment fire at East Winds Apartment complex on Boundary Street. Fire officials say no one was injured and all residents were evacuated. The fire displaced six adults. Shavonne Walker/Salisbury Post

A resident in Apartment 42 told fire investigators she may have accidentally turned the stove on when she leaned over it to reach something, said Fire Investigator David Sells. The woman said she left the apartment at 2:30 p.m. Firefighters were dispatched at 2:43 p.m.

East Spencer Fire Chief Josh Smith said before firefighters arrived, they were told the fire was coming from four apartments. They quickly learned that only Apartment 42 was involved.

All of the residents in the unit evacuated before firefighters arrived, and fire officials evacuated other residents. The first crews to arrive saw fire coming from the kitchen and were able to extinguish it before the flames spread.

Smith said there was smoke and water damage to adjoining units. The fire was under control at 3:20 p.m.

Firefighters used industrial fans to clear smoke from the apartments.

The Hanford Dole Chapter of the American Red Cross is assisting the residents who were displaced.