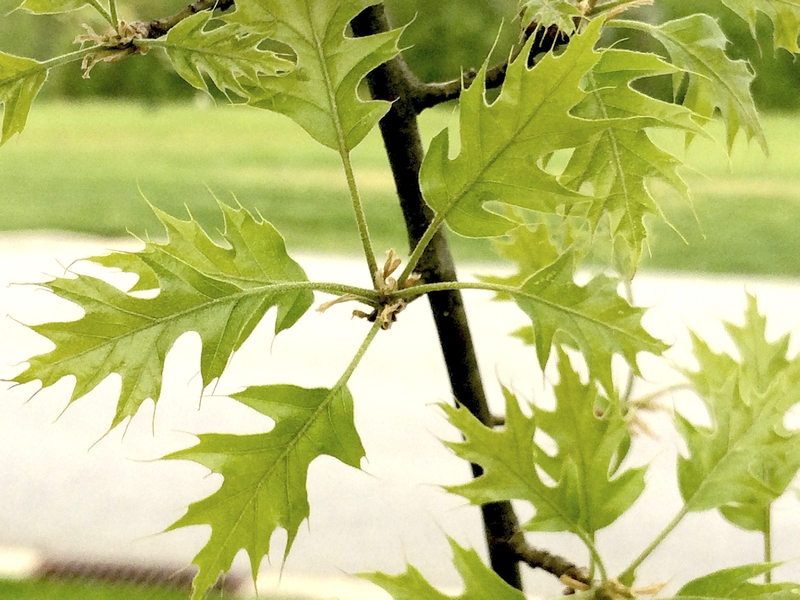 Submitted photo Oak pollen, coming from these blooms, is one of the main culprits in seasonal allergies.

Like many people, my daughter and I suffer from seasonal allergies. We live on a large pine plantation, and every year our cars, house and cats are covered in greenish yellow pine pollen.

Through the magic of modern medicine we are able to get through the spring with a few extra tissues and the occasional sinus headache. While we battle the pine pollen to keep our cars clean, it is not the cause of our allergy problem.

Pollen grains are the male cells of flowering plants, like grasses, flowers, trees and weeds. Pollen is an important part of reproduction in these plants.

Most pollen grains are smaller than 80 microns, which is about the width of a human hair. Some pollen causes allergic reactions in some people.

Pollen grains are wind dispersed and cause most of the allergy problems because these are the pollens that make their way into our nasal passages. Pine pollen may be coating sidewalks and cars with yellow dust, but it is not to blame for making people sneeze.

People suffer from pollen allergies, but pine pollen doesn’t contribute to it. The chemical composition of pine pollen appears to make it less allergenic than other types. Because pine pollen is heavy, it tends to fall straight down and does not scatter easily in the wind. It rarely reaches human noses.

Among North American plants, weeds are the most prolific producers of pollen, with ragweed most often the culprit in making people sneeze and eyes water. Broadleaf trees, such as oaks, ash, elm, hickory, pecan and box elder also contribute to the pool of allergy-inducing pollen.

These plants manufacture small, light, dry pollen granules that are custom-made for wind transport. Tree pollen is at its highest in mid- to late April. Tree pollen season peaks in April and lasts through June. Grass pollen peaks in May and continues into September.

Weed pollen will continue to increase throughout May and into June, while in July the pollen level is relatively low. Ragweed pollen is significant from late August to mid-September. Samples of ragweed pollen have been collected 400 miles out at sea and 2 miles high in the air.

Because airborne pollen is carried for long distances, it does little good to rid an area of an offending plant. The pollen can drift in from many miles away. Also, most allergenic pollen comes from plants that produce it in huge quantities. A single ragweed plant can generate a million grains of pollen a day.

The blooming, showy, flowers such as daffodils, crocus and forsythia that accompany the onset of spring signal the beginning of pollen season, which lasts several weeks. Pollen from these showy flowers is large, heavy, waxy grains that are not carried by the wind but by insects such as butterflies and bees, rarely reaching human noses and often not the culprit of pollen allergies.

The amount of pollen varies widely within local areas and among geographic regions. Weather conditions have a significant impact on pollen season. A rainy spring or late spring frost that kills flowers often reduces the amount of pollen in the atmosphere.

The amount of pollen in the atmosphere tends to be highest early in the morning on warm, dry, breezy days and lowest during chilly, wet periods. Short of staying indoors when the pollen count is high, and even that may not help, there is no easy way to evade wind-borne pollen.

For more information on pollen or to look at the daily pollen reports check out http://go.ncsu.edu/ncpollenmonitor. The Forsyth County health department also provides daily pollen reports at https://forsyth.cc/EAP/pollen.aspx. For more information on pollen or other horticultural questions contact the Rowan County Extension Center at 704-216-8970.

Catawba and Steppin’ Out present ‘Alice in Wonderland’ fantasy