Make it a sweep: Nationals win third straight over Braves 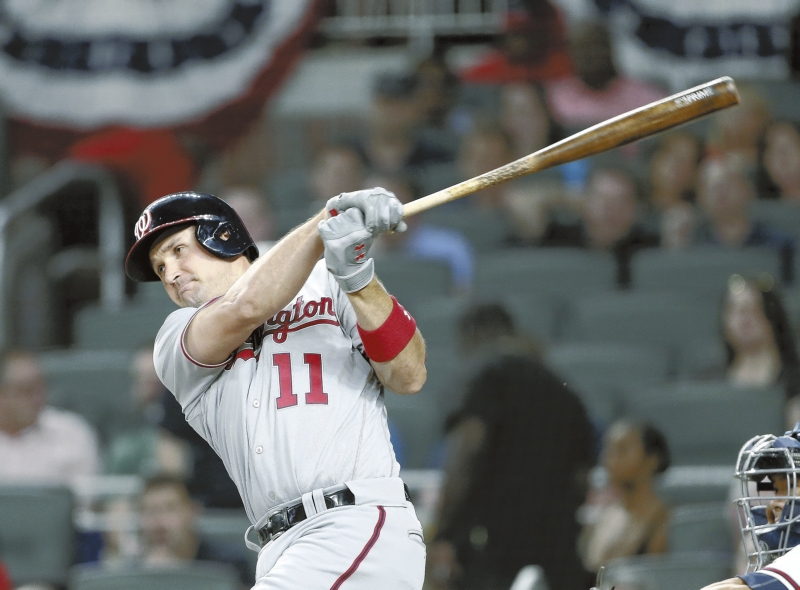 Washington Nationals' Ryan Zimmerman follows through on a two-run home run in the sixth inning of a baseball game against the Atlanta Braves on Thursday, April 20, 2017, in Atlanta. (AP Photo/John Bazemore)

ATLANTA (AP) — Ryan Zimmerman hit a two-run homer, Stephen Strasburg struck out 10 and the Washington Nationals completed a three-game sweep with a 3-2 victory over the Atlanta Braves on Thursday night.

A night after had 14 runs on 20 hits, the Nationals couldn’t solve R.A. Dickey’s knuckleball until Zimmerman homered in the sixth to erase a 2-1 deficit.

Strasburg (2-0) allowed two runs, six hits and two walks in seven innings, winning his first start at SunTrust Park after going 4-3 with a 4.37 ERA in 10 outings at Turner Field. Strasburg improved to 72-8 when the Nationals score at least three runs.

Shawn Kelley had an eventful ninth before earning his second save in three tries. He retired the first two batters before Kurt Suzuki singled and pinch-hitter Tyler Flowers walked. Ender Inciarte followed with a game-ending flyout.

Atlanta went 4-3 on its first homestand at its new ballpark, where it opened by sweeping a four-game series from San Diego.

Zimmerman, who has hit safely in 12 of 15 games, doubled to begin the second and scored on Michael Taylor’s sacrifice fly, then hit his fifth homer.

Dickey hit an RBI grounder in the second, and Kurt Suzuki had a sacrifice fly in the fourth.

Matt Kemp came off the 10-day DL and couldn’t catch up to Strasburg’s fastball, striking out three times. Kemp, who missed eight games with a sore hamstring, grounded out softly to reliever Koda Glover in the eighth.

Washington RF Bryce Harper ran forward to make a shoestring catch to save two runs in the second. … Taylor ran up and dove to catch Phillips’ liner to save a run in the sixth. … Strasburg got some good defense behind him in the seventh by LF Adam Eaton, who had to adjust his glove wrist up on a running catch, and 3B Anthony Rendon, who was guarding the foul line and dropped to the ground before throwing out Adonis Garcia.

Braves 1B Freddie Freeman was leading the majors with a .440 average but went 0 for 4.

Nationals: 2B Daniel Murphy was scratched from the lineup with right leg tightness. Manager Dusty Baker said he could tell Murphy wasn’t following through with his swing during Wednesday’s 14-4 win. … Baker said SS Trea Turner, on the 10-day DL since April 10 with a strained right hamstring, will be activated Friday at the New York Mets but likely won’t start. … LF Jayson Werth was held out of the lineup with a sore groin.

Braves: SS Dansby Swanson wasn’t injured, but manager Brian Snitker gave him a scheduled night off from the starting lineup. Swanson pinch ran in the ninth.

Nationals: RHP Tanner Roark (2-0) has a 3.50 ERA in three starts. He is 3-1 with a 2.08 ERA in five starts and three relief appearances at Citi Field, where the Nationals open a series Friday.

Braves: RHP Bartolo Colon (1-1) has a 4.24 ERA in three starts going into Friday’s outing at Philadelphia.