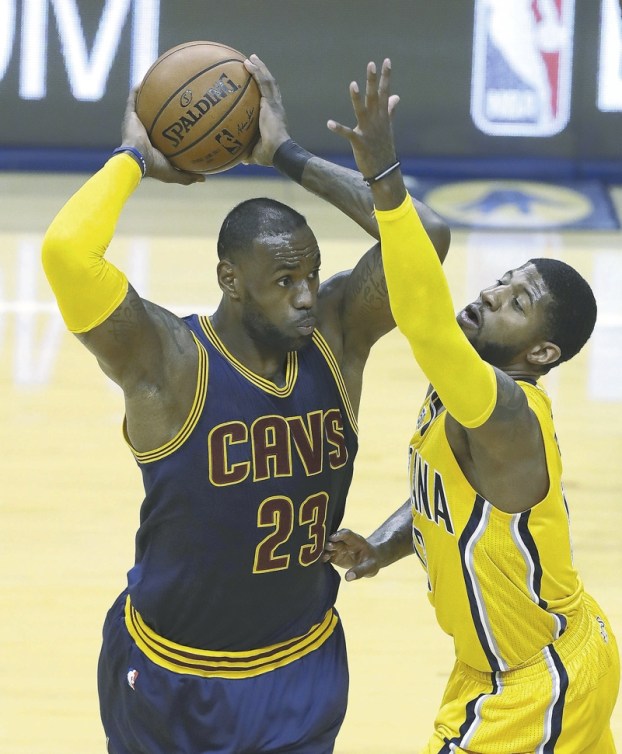 LeBron, Cavaliers come from 26 down to take 3-0 lead against Pacers

INDIANAPOLIS (AP) — LeBron James finished with 41 points, 13 rebounds and 12 assists, and the Cleveland Cavaliers set an NBA postseason record by erasing a 25-point halftime deficit to beat the Indiana Pacers 119-114 on Thursday night and take a 3-0 lead.

James passed Kobe Bryant for No. 3 on the NBA’s career playoff scoring list and tied another NBA record by winning his 20th consecutive first-round game.

The Cavaliers will try to sweep the series Sunday.

Cleveland trailed by 26 in the first half and was still down 74-49 at halftime. The largest halftime deficit overcome to win a playoff game had been 21 points by Baltimore against Philadelphia in 1948.

James scored 13 points in the third quarter to get the Cavs within 91-84.

This comeback began with a second straight devastating third-quarter punch from the Cavs.

After Cleveland cut the deficit to 77-62 and then watched Indiana extend the margin to 20, Cleveland finished the quarter on a 17-4 spurt to make it 91-84.

Things only got worse for the Pacers.

George’s 3 with 5:15 to go gave Indiana a 104-103 lead — its last of the game. James answered with a layup out of a timeout and the Cavs never trailed again.

It’s only the second time in the Pacers’ NBA history they have lost the first three games in a best-of-seven series. Indiana has never endured a four-game sweep since joining the NBA.

Cavaliers: Kyrie Irving Kevin Love, J.R. Smith, Channing Frye all scored 13 points. … Cleveland has won six straight over Indiana. … After scoring 49 points in the first half, the Cavs scored 35 in each of the final two quarters. … Kyle Korver scored more points in two quarters (six) than he did in the first two games (four).  He finished with 12.

Pacers: George had 23 points, nine rebounds and five assists, and Lance Stephenson added eight points and five rebounds in the first two quarters. … Indiana scored 37 points in the first quarter, falling just short of a season high (39), then matched that 37 in the second quarter for its highest first-half total of the season. … Coach Nate McMillan made a lineup change, inserting former Cavs player C.J. Miles into the starting rotation. Monta Ellis was relegated to bench duty. … The Pacers drew two defensive three-second calls in the first half.

On Sunday, Indiana will try to stave off elimination when it hosts Cleveland for Game 4.

MILWAUKEE (AP) — Khris Middleton scored 20 points and the Milwaukee Bucks overwhelmed the cold-shooting Toronto Raptors for a 104-77 win on Thursday night to take a 2-1 lead in their first-round Eastern Conference playoff series.

Greg Monroe added 16 points and seven rebounds for the Bucks, who held DeMar DeRozan without a basket and never looked back after leading by 20 points after the first quarter.

Making this blowout even more impressive was that they barely needed All-Star Giannis Antetokounmpo. He finished with 19 points and eight boards.

Game 4 is Saturday back at the Bradley Center.

With raucous fans wearing black Bucks giveaway T-shirts to match the players’ uniforms, Milwaukee put on a dominating display of basketball worthy of the team’s “Fear the Deer” slogan.

The Raptors looked frazzled after shooting 4 of 18 in the first quarter. Kyle Lowry had 13 points.

This night belonged to Milwaukee.

The Bucks moved the ball well, hit open shots and had a double-digit edge on points in the paint for much of the night.

On the other end, the Bucks’ length bothered the Raptors. Toronto also started poorly from the 3-point line, missing its first six shots from behind the arc.

With about 6 minutes left in the second quarter, the Raptors had called their fourth timeout while trailing by 31. They had only six field goals at the time.

If the Bucks take this series, Game 3 might be seen as a a href=’https://www.apnews.com/913763f44a9b404db366330095879716/Playoff-berth-gives-rest-of-NBA-glimpse-into-Bucks’-future’turning point in the development of an up-and-coming franchise/a in a town starving for basketball success. Milwaukee hasn’t won a playoff series since going to the conference finals in 2001.

Few fans, if any, left the sold-out Bradley Center by the end of the night, cheering loudly for every last Antetokounmpo dunk and block.

Raptors: Toronto trailed 57-30 at the half, tying the team’s regular-season low for scoring in a half. The Raptors scored 30 in the second half of a loss at Charlotte on Jan. 20, 2017. … Frustration was evident early in the game. Serge Ibaka was whistled for a technical foul with 2:03 left in the first half and Toronto trailing by 31 points after slamming the ball hard on the floor following a defensive goaltending call.

Bucks: Middleton finished 8 of 15 after hitting his first five shots to get the offense going. The 6-foot-8 forward is the Bucks’ best all-around player after Antetokounmpo with his ability to hit from the 3-point line, create in traffic and defend on the perimeter. … Monroe fouled out with 8:07 left.