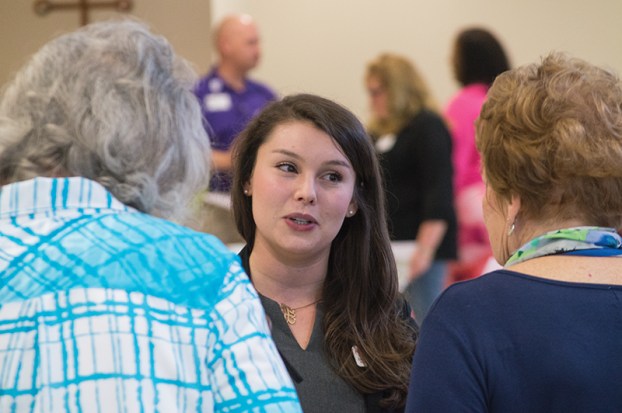 Smith was the featured speaker at Thursday’s Rowan County Chamber of Commerce breakfast. Her organization is a collaboration among 25 local organizations that aims to create a healthier community. On Thursday, she outlined Rowan County’s relatively poor quality of health, used 2017 county health rankings as examples and encouraged businesses to start with small improvements.

The rankings, supported by the Robert Wood Johnson Foundation, placed Rowan 73 out of 100 North Carolina counties for health outcomes, which weighs the local length and quality of life. All counties adjacent to Rowan fared notably better. Davidson County, for example, ranked 61 out of 100 counties. Stanly ranked 40.

“We have ranked low pretty much since these health rankings have started coming out,” Smith said. “So we’re not seeing this great trend of us improving our health outcomes, which we really need to start turning the curve and putting different resources toward addressing this issue.”

Health can be an economic issue, too, Smith said. Obesity can lead employees to be less productive, she said. U.S. employers lose about $160 billion annually in productivity because of obesity-related problems.

“We know that the cost of this disease is unsustainable,” she said.

Obesity isn’t just about a person’s weight, she said. Someone with a body mass index of 30 or more is considered obese.

Smith presented individual statistics, too. For example, 18 percent of adults in Rowan County smoke and 33 percent are obese, according to the health rankings.

Smith said trends suggest that the current generation of young people could be the first to live shorter lives than their parents.

But it wasn’t all bad news Thursday. There are easy ways to improve, she said.

The first is known as “the daily mile,” an initiative that would encourage students in public schools to walk or jog for 15 minutes per day. It’s something that could be implemented immediately in the next school year, Smith said.

“It’s a small rock that could lead to a ripple effect of getting kids excited about physical activity again, getting teachers up and walking with them, but it also has proven results leading to better academic performance and decreased behavior problems in the classroom,” she said.

Healthy Rowan has discussed how it would be able to get the business community involved in improving community health, she said. It could be as simple as incorporating a stretch break into long business meetings or offering healthy options for meals at work.

“I know of folks being able to take smoke breaks, but are we offering physical activity breaks?” she asked the crowd. “Those are the behaviors we should be supporting.”

She said a number of people in Rowan County are dedicated to improving health. When Healthy Rowan helped organize a community forum in 2016, more than 150 community partners showed up.

“There are lots of resources here in Rowan County, and we need to do a better job of cross-promoting the agencies that are out there already helping folks,” she said.

She wrapped up by asking business leaders to think about how they can collaborate to make Rowan County a healthier place. Smith said she thinks of businesses as being the largest sponsor of health spending and having the most to gain from a healthy community. She said businesses should look to invest in ideas that support healthful living.

By Rebecca Rider rebecca.rider@salisburypost.com SALISBURY — While some students are taking advantage of spring break to race off to the... read more