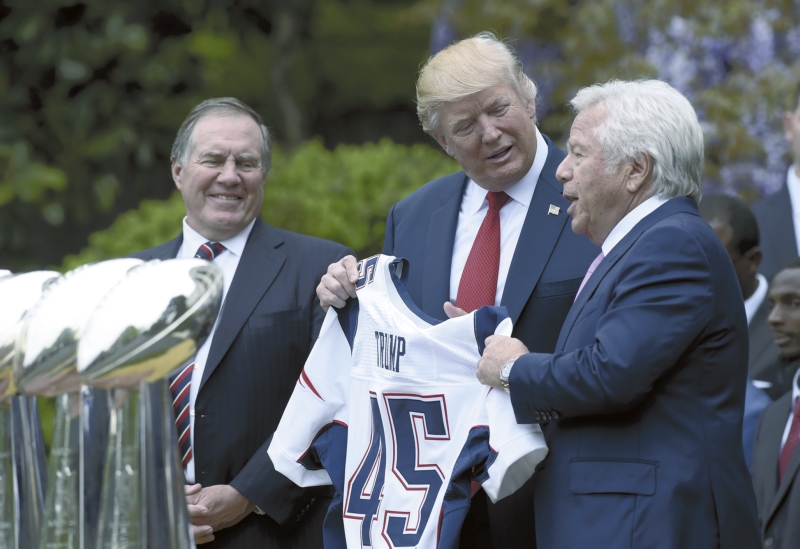 By Catherine Lucey And Jonathan Lemire

WASHINGTON (AP) — President Donald Trump welcomed the New England Patriots to the White House Wednesday, noting the parallels between his own upset victory and their stunning Super Bowl win — but avoiding discussion of the apparent prison suicide of their former teammate Aaron Hernandez earlier in the day.

As he extolled the team’s virtues and saluted individual players, the president did not name star quarterback Tom Brady, who notified the White House that he was dealing with a “personal family matter” and would not attend the ceremony.

Trump hosted the five-time champions on the South Lawn and declared that “no team has been good this long.”

“It was a complete team effort. That’s the beauty of what they do, they win as a team,” said Trump, who compared the team’s 25-point comeback against the Atlanta Falcons in February to his own political upset. “Pundits, boy, are they wrong a lot, aren’t they? They said you couldn’t do it.”

More than two dozen Patriots skipped the ceremony. Several had said beforehand that they would not show for political reasons. Shortly before the event, Brady posted a photo of his parents on Instagram, wishing them a happy anniversary.

Casting a pall over the ceremony was the news about Hernandez, who hanged himself in a prison cell hours before the White House visit, according to Massachusetts prison officials. Hernandez, who played for the Patriots from 2010 to 2012, was serving a life sentence for a murder conviction. Days ago, the 27-year-old former tight end was acquitted of a double murder.

A team spokesman said the Patriots were aware of the reports of Hernandez’s death but the club wasn’t expected to comment. Two players were brought to speak to reporters after the White House ceremony, but both said they had not known Hernandez.

Wide receiver Malcolm Mitchell said he was moved by the White House ceremony, saying it “almost brought me to tears. As a child growing up, I never would have thought a president would have said my name by any means.”

One player made an impromptu appearance at a White House press before the official ceremony. Tight end Rob Gronkowski stuck his head in the door of the briefing room as Press Secretary Sean Spicer was holding a televised briefing.

Gronkowski jokingly asked Spicer whether he needed any help. Spicer — an avid Patriots fan — responded: “I think I got this. But thank you.”

During the South Lawn ceremony, Trump recounted reading a supportive letter from Belichick on the eve of the election, while Kraft saluted the president as a friend for decades.

“It is a distinct honor for us to celebrate what was unequivocally our sweetest championship with a very good friend and somebody whose mental toughness and strength I greatly admire,” said Kraft. The team presented the president with a personalized “Trump” No. 45 jersey and a helmet from February’s Super Bowl, the first such game to go to overtime.

Kraft was one of at least seven NFL team owners who gave $1 million each to Trump’s inaugural committee, a new fundraising report shows. Others include the owners of the Houston Texans, the Washington Redskins, the Jacksonville Jaguars and the Los Angeles Rams. Kraft gave the money via his Kraft Group LLC.

After the victory in February, tight end Martellus Bennett quickly made it clear he was not coming to the White House, and other teammates followed. Some noted their differences with the Republican administration, though others did not an issue a reason for their absence.

Defensive back Devin McCourty told Time Magazine: “I don’t feel accepted in the White House. With the president having so many strong opinions and prejudices I believe certain people might feel accepted there while others won’t.”

Players have turned down White House invites ever since such events began to take off under President Ronald Reagan. That includes Brady in 2015. He cited a “family commitment” at the time, but there was speculation he declined because of some unflattering comments a spokesman for President Barack Obama made about the “Deflategate” scandal.