NFL Draft is one week away 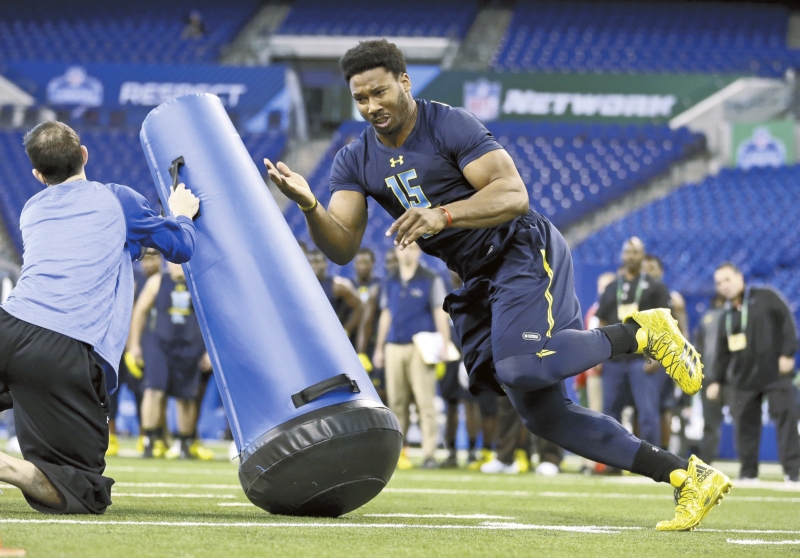 FILE - In this March 5, 2017, file photo, Texas A&M defensive end Myles Garrett runs a drill at the NFL football scouting combine in Indianapolis. The Cleveland Browns are inclined to keep the No. 1 overall pick in next week’s NFL draft despite getting offers for it. Sashi Brown, the team’s vice president of football operations, said Wednesday, April 19, 2017, that the Browns “feel really good about drafting No. 1."(AP Photo/Michael Conroy, File)

The team’s top football executive was intentionally vague on a number of subjects, including which player the Browns will select with the No. 1 overall pick, though it appears Texas A&M defensive end Myles Garrett is the choice.

But as he was wrapped up his news conference, Brown, who has spent the past year acquiring picks for this draft, finally gave a definitive answer. Asked if the team will trade for a veteran quarterback on draft weekend, he didn’t mince words.

His comment would seem to ends months of rampant speculation that Cleveland is angling to acquire New England’s Jimmy Garoppolo or Cincinnati’s AJ McCarron to help solve their decade-old search for a franchise quarterback.

So there is no gray area, Brown was asked if a deal could happen before next week’s draft.

“Could we in theory? Yes,” he said after standing at the podium. “But are we planning on it or is that the plan? No.”

And with that, Cleveland’s seemingly endless quarterback quest took another twist.

But as the Browns prepare to pick a draft class he described as “momentous” for an organization still recovering from a 1-15 season, Brown feels the team is well positioned to add players that will “return to winning here in Cleveland.”

Garrett appears to be the head of that rookie group.

Brown said the team has received calls about a possible trade for the No. 1 pick, but indicated the Browns will likely keep it, and that they’ve zeroed in on who they want.

“We feel really good about picking at one,” he said, “and I’ll leave it at that.”

Both Brown and Andrew Berry, the club’s vice president of player personnel, gushed when talking about the Aggies All-American, who has emerged as the consensus best player on the board in 2017.

Garrett could transform Cleveland’s defense, giving it a ferocious edge rusher opponents will have to scheme to stop. The Browns don’t have enough of those players on their roster.

The team has spent a lot of time getting to know Garrett over the past few months.

“We learned a lot about what makes him tick, what motivates him, how he spends his down time, how he spends his time with his teammates,” Brown said. “You can learn a lot. He is an enjoyable young man, very bright. Whatever team gets him, particularly if it’s us, would be proud to have him.”

One of the only criticisms of Garrett is that it appeared he took plays off during his three seasons in college. Berry, though, said the Browns don’t have any issues with Garrett’s competitiveness.

“Sometimes those concerns are a little bit overstated,” he said. “Every prospect is going to have his weaknesses. There is no such thing as a perfect player.”

Or a perfect draft.

The biggest remains at quarterback, and Cleveland, which has started 26 QBs since 1999, could not only come away with Garrett but with the best young passer available as well. If they need to move up from 12, the Browns have the resources with 11 picks.

North Carolina’s Mitch Trubisky is believed to be Cleveland’s highest-rated quarterback, and his Northeast Ohio roots could make him irresistible to the team he grew up rooting for.

Trubisky started only 13 games for the Tar Heels, and his lack of experience could deter teams ahead of the Browns from taking him. A Garrett-and-Trubisky package would be considered a smashing success in Cleveland, where fans treat the event like the Super Bowl they’ve never gotten.

Brown isn’t feeling any more pressure to get this draft right, but he knows it’s vital not to get it wrong.

“We are not trying to take some approach where it is this draft or bust,” he said. “My job is to make sure that our organization makes a series of good decisions. When you do that over time with a good plan, strategy and alignment, you are going to be good in this league.  We have seen this in our division. The teams that we play against have all been together a long time and have those systems very right.

“That is what we are heading toward.”