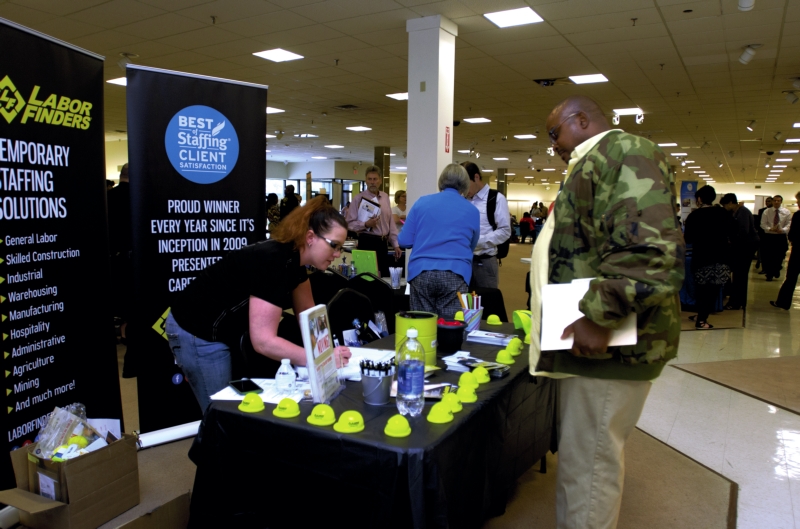 Gretchen Houghtaling, left, with Labor Finders talks with Turoqua Correll at a Job Fair at the West in Plaza in Salisbury on April 19, 2017. Kristi Craven/Salisbury Post

That consensus emerged Wednesday at a job fair in Salisbury that attracted a large group of people and about 50 employers. All employers at the job fair hoped to fill a minimum of one full-time position, said NCWorks Career Center leader Debbie Davis. Employers ranged from manufacturers to restaurants. Job seekers represented an equally large range — from some with graduate degrees and some with GEDs.

Will Triplett and CJ McCluney were among the job seekers. Both previously worked in temporary jobs at the same company. On Tuesday, Triplett and McCluney were looking for different types of work. Triplett said he prefers something outdoors; McCluney was hoping for an office job.

But the pair agreed on at least one point.

“I think the jobs are out there,” Triplett said. “It’s just a lack of motivation for some people to do the work, honestly. Because there are some jobs I know I could do, but I don’t know if I would be interested.”

McCluney said he thinks Salisbury area companies are expanding or adding jobs. Still, transportation can be a significant speed bump for some, he said.

When transportation is a problem, the solution may be taking a job that’s within walking distance, said Shinique McNeil, an employment specialist with Primary Care Solutions. McNeil wasn’t looking for a job. Instead, she hoped to find jobs for her clients.

One client, McNeil said, cannot drive and doesn’t have a friend or family member who can provide transportation.

“The challenge, in that case, is just finding something that they can get to,” she said.

Public transportation isn’t an option, for one reason or another, in a number of cases, she said.

Other applicants may not have qualifications, but that’s a solvable problem, according to Davis. She said her office provides free job training. She recommended visiting ncworks.gov for more information.

“We can work with people to make a plan and find the right direction,” Davis said.

Wednesday was the latest in a number of job fairs hosted at West End Plaza by a collection of community agencies. In the morning, a large crowd attended an employer panel presentation. Doors opened to the job fair at 10:30 a.m.

Dee Dee Wright, who helped organize the event, said she thinks the job fair “has hit on something.” As proof, Wright talked about the variety of companies, including one addition, at West End Plaza on Wednesday. She said job seekers seemed to have a positive experience.

“I told you it would be fun,” she told one young man as he left the job fair.

Linda Childress, who works at Schult Homes, said company representatives spoke with a number of qualified candidates for its open jobs on Wednesday and at previous job fairs. Childress said Schult is hiring for jobs at a facility to transport its newly constructed buildings.

“It’s been a mixed group, but it has really been very good,” Childress said. “If people are looking for job, they are going to find one because there are plenty of companies offering here. You just have to be willing to work. A lot of times, people may be willing to fill out an application, but are they willing to work?”