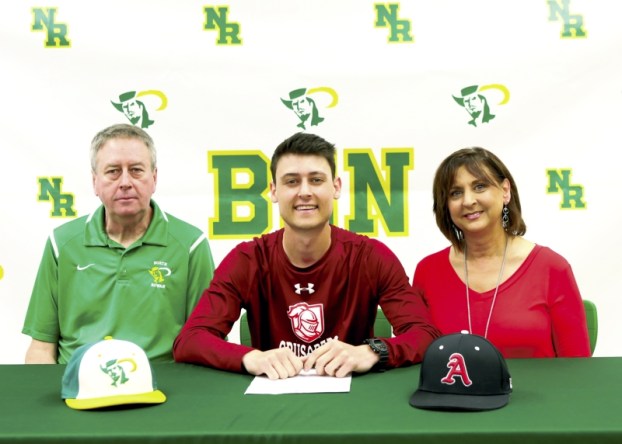 Submitted photo by Jacqui Watson ... North Rowan’s Joe Harrison, center, recently announced that he will be continuing his education and baseball career at Belmont Abbey College. He is flanked by his father, David, left, and mother, Susan. ALLISON LEE ISLEY/SALISBURY POST FILE PHOTO …
North Rowan pitcher Joe Harrison is shown during a 2016 game at Staton Field in Granite Quarry. Harrison recently announced that he will be continuing his education and baseball career at Belmont Abbey College.

“I knew we needed him to be our No. 1 pitcher,” Small said. “But I had no idea he would come out and dominate. I didn’t see that coming.”

The Cavaliers (6-11) have struggled frequently offensively and defensively, and that helps explain why Harrison has a 2-4 record. He’s thrown four complete games and he’s struck out a lot of people.

Harrison, a key member of North’s 2016 Central Carolina Conference champs, has taken a tough season in stride. It helps that his future is brighter than his present. He signed with Division II Belmont Abbey’s baseball program last week.

The Crusaders are currently 27-15, and that’s actually an off-year for them. Belmont Abbey head coach Chris Anderson has Rowan ties. He pitched at Catawba and served as pitching coach during some of the best seasons for the South Rowan American Legion program. So he’s always watchful for Rowan players. North graduates Brandon White and Trey Stoner already are at Belmont Abbey.

“I hadn’t really thought about Belmont Abbey until Brandon and Trey went there,” Harrison said. “But when I started looking into it, I could see it was a strong program with great coaches. They’re one of the best  in D-II.”

Belmont Abbey coaches watched Harrison pitch for the Charlotte Megastars showcase team and made him an offer when he attended a camp. Harrison gave a verbal commitment in January.

Harrison has overcome injuries to get where he is now. Setbacks included a broken leg in middle school and a broken arm as a freshman, but he’s kept on ticking.

Five years ago, Harrison was convinced basketball was his best sport, but baseball gradually passed hoops. Now there’s more Chris Sale in him than Chris Paul.

“The ninth grade was the turning point because I was playing some on the varsity baseball team, but I was on the jayvee basketball team,” Harrison said.  “I started thinking I could do more in baseball.”

Harrison is a good all-round athlete. Not many athletes in this era of specialization can say they’ve scored in varsity baseball, basketball and football games. Harrison has.

A three-year varsity basketball player, his career high was the 14 points he scored against 4A Middle Creek as a senior.

When North’s all-county kicker Jacob Young was banged up back in the fall, Harrison helped out with kickoffs and a couple of PATs. Harrison had a touchback, putting a kickoff in the end zone against Salisbury.

“Joe hustles all the time,” North football coach and athletic director Ben Hampton said. “And he’s always been willing to do anything he can to help any team he’s on.”

In baseball, Harrison was recognized with All-Central Carolina honors as a junior. He had a tremendous year in relief of starters White and Noah Gonzalez. He went 5-0 with two saves and allowed only one earned run in nine appearances during the regular season.

Harrison looks back at the Salisbury game last April as the highlight of his career at North. Salisbury had an eight-run third inning to take a 9-5 lead. Harrison relieved, pitched four shutout innings, and North came back to win, 13-9.  Without Harrison’s effort, North doesn’t win an outright CCC title in former coach Aaron Rimer’s final season.

“I wasn’t expecting to pitch in that game, so that was my favorite moment,” Harrison said. “I was able to keep us in it.”

Harrison is a good outfielder and a decent hitter, but pitching is where he excels. He credits Jason Sparger, a former North Rowan player and assistant coach, with helping him with the mental aspects of pitching.

Harrison gave North a chance to win his biggest starts so far this year, but he got a no-decision against CCC-leading West Davidson and a loss against second-place East Davidson. He threw until he was on the edge of the pitch-count limit (105 pitches) and struck out  a total of 14 batters against two quality teams. North lost both games, 3-1.

“Joe’s fastball is sneaky quick and he locates it,” Small said. “He mixes his pitches well, and he’s got a good cutter, curveball and change-up. He’s getting better at working both sides of the plate, not just the outside corner.”

Harrison has tweaked his pitching style this season, with more aggression and less finesse. He’s tried to conserve pitches because of the pitch-count rule. When he gets ahead of a batter 0-and-1 or 1-and 2, he’ll challenge him now, instead of trying to get the batter to chase a pitch out of the strike zone.

“But the keys for me are still movement and keeping the ball low,” Harrison said.

Besides being a good student and ballplayer, Harrison has displayed admirable character.

As the final cutdown approached for the Rowan County American Legion team last June, Harrison started on the mound against a good Davidson County squad. He had a shaky first inning, but then he put up zeroes in the second, third, fourth, fifth and sixth, before tiring in the seventh. Brett Graham, a West Rowan senior who also is headed to Belmont Abbey,  preserved the win for Harrison.

Harrison was 2-0 for Rowan, but he was cut the following day when the roster was trimmed from 20 to the final 18-man squad that would finish as national runner-up.  He wasn’t bitter. He went to every game and cheered for his friends and teammates. Now he plans to try out for the Legion team again.

“It was disappointing not to make that last cut,” Harrison said. “But it was a loaded pitching staff. It wasn’t like I didn’t do well. Other guys just did better.”