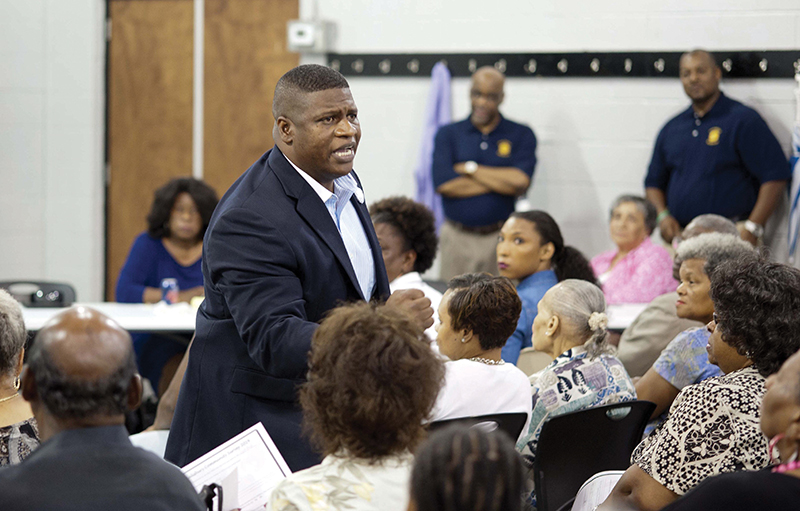 JON C. LAKEY / SALISBURY POST FILE PHOTO - Clee Atkinson was one of the two scheduled speakers during a community meeting four years ago at the Miller Recreation Center.

Yes, there have been positive changes, but we’ve still got more work to do for the West End community.

There’s more work to do for the West End family afraid to walk the streets after dark; for the young men who, without easily accessible, good-paying jobs, may be tempted to turn to crime; and for the streets where abandoned, dilapidated houses dot the roadside.

Salisbury is not finished improving its quality of life and eradicating gun violence. To complete the task before us, every facet of our community must pitch in — from churches to schools and, yes, city government, too.

We’ve seen the effect of gun violence on our community. Gunshots ring out in the silence of night. At times, shots echo in the din of day. More than once, shootings have occurred in the neighborhoods surrounding Salisbury High School. We’ve watched as gun violence claimed the lives of children.

Again, we’ve turned to community meetings as a solution. Residents talk about a solution, plan a course of action and, then, seem to lose interest.

As reporter Shavonne Walker wrote in Sunday’s Salisbury Post, the West End community gathered four years ago for a series of meetings about fixing violence that had seemingly reached epidemic proportions. In the years since, some bright spots emerged. Mentoring programs Gemstones Academy and COMPASS are good examples. County officials have decided to create a special, drug-focused unit in the sheriff’s office. City officials are pursuing pay raises that Police Chief Jerry Stokes said would make his department “the place to come work.”

Still, there’s more work to do. Our problems require more than new sheriff’s deputies or better pay for police officers.

At times the action necesary involves motivating community members. A solution will be more effective when it trickles up from the grassroots level rather than being dictated from the top. Plans from elected and appointed leaders only go so far. If every person who believes in a more prosperous Salisbury hit the streets, got involved in community groups and dedicated themselves to creating a better life for the city’s youth, we can achieve the change we seek. It may be as simple as tutoring a child or cleaning up trash on a city block or as complex as recruiting employers to the area.

Education and job training remain significant hurdles for some in Salisbury to obtain good jobs. As we look to improve small things within our community, we must also work slowly toward the leaps and bounds that will permanently change the quality of life for the better.

We all bear a responsibility for making a positive change. Everyone can contribute in their own way.