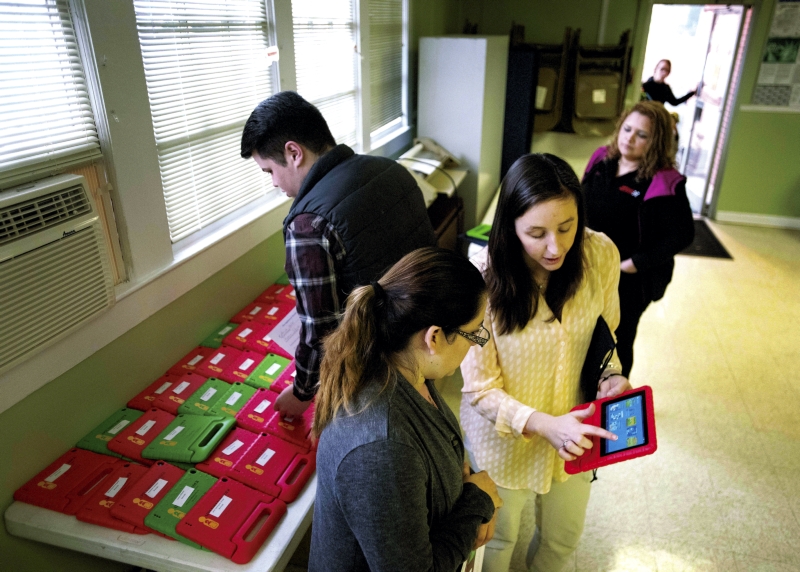 Appleseed program intern Kristen Harman explains the basics to Marisol Ruiz, who was among parents of Head Start students to get a new reader in a program organized by Appleseed in January. Jon C. Lakey/Salisbury Post file photo

SALISBURY — Local nonprofit Appleseed might be in the observation phase of its plan to provide e-readers to at-risk children in Rowan County, but that doesn’t mean the organization is kicking its heels.

While Appleseed collects data in the hopes of a countywide launch to all eligible households, founder Greg Alcorn, who also serves on the N.C. Board of Education, said the organization has been seizing other opportunities, as well.

Appleseed was recently approached by both Partners in Learning, an inclusive child-care facility in Salisbury, and by the city about providing e-readers to children.

The readers are modified Amazon Kindle tablets, tweaked to offer hundreds of books and literacy-learning apps to at-risk children from infant to age 5. The goal is to ensure that students are ready for kindergarten and to boost reading scores and ability by the time the children reach third grade.

Usually, Appleseed operates on a “hub and spoke” model, with families using the e-readers based at a central location — Head Start — where they can bring the device for maintenance and updates. It’s a model that’s worked well so far, Alcorn said, and it “is really humming now.” In January, Appleseed distributed about 600 e-readers to Rowan County’s eight Head Start locations.

If the devices are as successful at boosting reading ability as Alcorn hopes, the organization will roll out the free service countywide — and the hub-and-spoke structure won’t necessarily work.

“That’ll be our first group that is scattered all over the county,” Alcorn said.

Partnering with city employees and Partners in Learning will allow Appleseed to test how the devices and services work with a more widespread population.

“It’s a good match,” Alcorn said of working with Partners in Learning, “because it’s a little bit of hub and spoke, but they’ve got a little bit of at-home children, foster children, children with special needs that we can see how our model works.”

The devices are provided free of charge, as long as parents agree to answer weekly text surveys about their child’s progress and use of the device. Each e-reader has been locked and modified to function solely as a child’s reading device; it can’t be used to watch videos, play games or surf the web.

Alcorn said Appleseed will provide 100 readers to Partners in Learning and 61 to city employees who have children infant to age 5. While partnering with both groups is “uncharted water” for Appleseed, Alcorn said it’s worth the investment.

Its new partnerships aren’t the only new thing at Appleseed. It was recently awarded a $15,000 grant from the Robertson Family Foundation, Alcorn said. The grant will be used to cover monitoring costs for the Head Start programs, which Alcorn estimates will cost roughly $70,000 over the course of a year.

The monitoring is an on-premise, ongoing service to make sure that all devices are working properly and to replace or repair broken readers.

“Fortunately, not many of them break. We’ve got that durability box checked off,” Alcorn said.

Appleseed is also in talks with other local foundations. Alcorn said the interest is affirmation that the program has value.

“We believe that, but it’s nice to hear that from a third party,” he said.

Amazon Inc. donated 300 Kindle Fire tablets to Appleseed. Alcorn said the devices were used by Amazon for training and demonstrations. The donation was unsolicited, he said.

“So that was terrific,” he said.

In the meantime, Appleseed is still “in a holding pattern” collecting feedback from parents and teachers and searching for solutions for problems that arise.

Alcorn said there have been some positive stories at the Head Starts, with children showing improved social and language skills. Many students are using the devices to read in groups, where they learn to work together and share.

“That’s been a pleasant surprise,” he said.

Head Start teachers have been assigning “homework” by pointing parents toward applications that can help children improve in areas of struggle.

But the real test will come in May and early June, when the children take required assessments. Alcorn, and the many groups, organizations and businesses that partner with Appleseed, are holding their breath to see how things will turn out. For Alcorn, the work is a “soul purpose.”