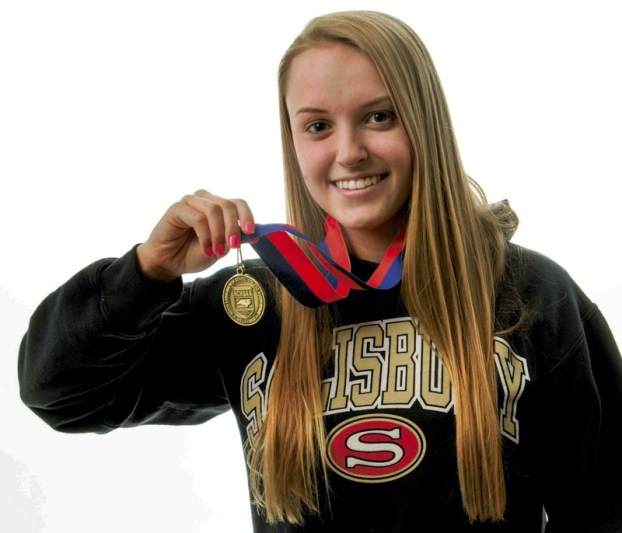 SALISBURY — Salisbury junior Kathryn Morrison is a gifted swimmer. If she didn’t work at her chosen sport, she’d probably still be pretty good.

After leading the Hornets to the Rowan County girls championship in January and winning a 2A state championship in the 100 backstroke, Morrison is the Salisbury Post’s Swimmer of the Year for the third straight time.

Morrison took the 100 back at the state meet with a time of 55.26 seconds, winning by two full seconds. She narrowly missed on the 100 butterfly (55.73), maybe because of her size. She and two other competitors reached for the wall pad practically at the same time.

“Kathryn’s about 5-2, and these girls that she’s swimming against are 4-6 inches taller,” said Salisbury coach Sallie Pittman. “That’s important at the finish when everyone is reaching for the wall. In that 100 fly, reach was probably the difference between first and third, so she needs to be ahead.”

Height might be Morrison’s only weakness. She’s already getting attention from colleges.

“That’s definitely a big goal of mine,” said Morrison. “I guess that I’ve known for a while that I wanted to swim in college. It’s always been a dream. I’m not sure where yet, but my top school at this point is N.C. State. I’ve talked with Kentucky … my times are Division I quality and that’s exciting.”

It looks like the work is paying off. Morrison is up almost every day at 4:30 a.m., to drive to Winston-Salem and swim practice for her club team — Enfinity Aquatic Club.

It’s a two-hour practice and then she drives back to Salisbury, straight to high school. Her parents, Martin and Tammy, have an app on their phones so they can track her travels, to make sure she’s safe.

Kathryn says the app is great because before, she would text her parents. If she forgot, they would, of course, get worried.

Obviously, her parents, too, are her biggest supporters. But they didn’t know right away that they had a swimmer on their hands.

“My mother wasn’t too crazy about the idea at first but I tried it out,” continued Morrison. “I never had swim lessons but just picked it up fast. I joined the Rowan Aquatic Club and when I was about 10, one of the coaches at RAC told my parents: ‘your daughter is really talented and is going to be really good one day’ … I think we knew at that time, that I was going to be stuck with swimming. I tried some other sports in elementary school but it didn’t turn out as good as swimming did. I was definitely meant to be a swimmer.”

A year later, she left RAC for Star Aquatics and then, three years ago, moved on to Enfinity.

“With club, I swim every morning, including Saturdays,” said Kathryn. “I get Sundays off, so that’s always nice, unless they call a non-swimming workout in a gym in Winston-Salem.”

While Tim Hillen at Enfinity is obviously Kathryn’s main coach now, there is a true mutual respect between the young swimmer and Pittman.

“She might be the hardest working individual I know,” said Pittman. “There aren’t a lot of high school kids that would be willing to get up at 4:30 every morning to go practice, then come to school, carry a full academic load, then, many times, go back to practice that afternoon or evening … and she does it with such a joyful personality.

Morrison said that Pittman was important to her success at the state meet.

“She definitely helps me at meets, especially at states — she was so encouraging,” said Morrison. “She’s always positive. We were worried about county meet because we have the skill but we don’t have as many kids as some of the other schools. Numbers are big in swim meets and Coach Pittman figured things out and put us in a position to win.”

And win the Hornets did, scoring 321 points, a 42-point advantage over second-place East Rowan.

So Morrison will keep working at her sport, so she can achieve more goals during her senior year. She wants to win state titles in both individual events next year and possibly even a relay or two.

“(Boys county swimmer of the year) Ethan Knorr’s two little sisters are coming next year into high school and they’re pretty fast, so we might be surprised at how good our relays can be next year,” said Kathryn.

Also earning a spot on the all-county team for their performances at the Rowan County Championships were:

By David Shaw sports@salisburypost.com SALISBURY — Any Rowan County swimmers who want to play Follow The Leader can line up... read more