Friends, classmates of family lost in accident try to process the tragedy 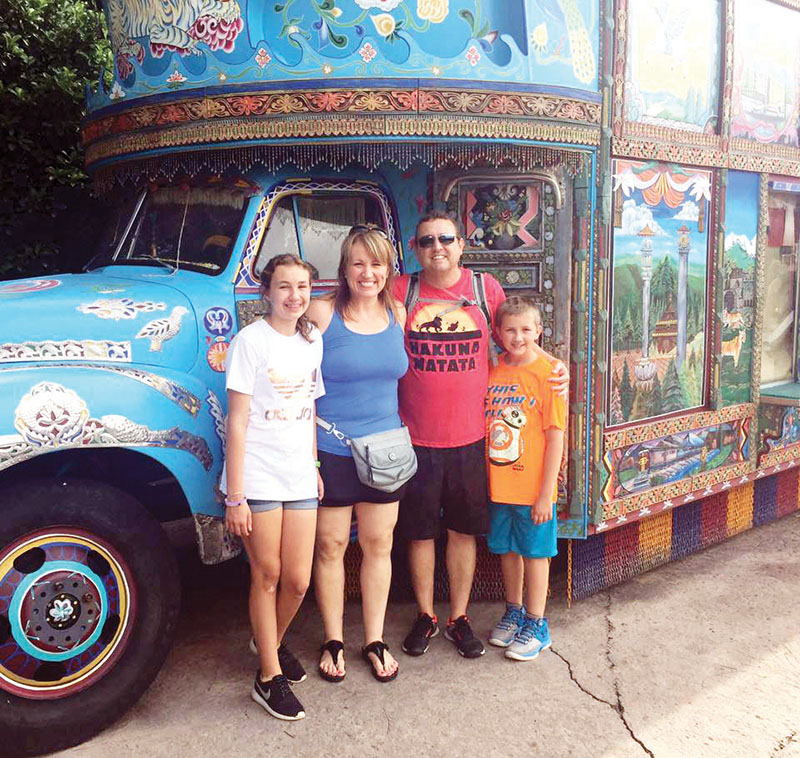 The Gilley family during a trip to Disney World's Animal Kingdom in May 2016: From left: Grace, Christine, David and Jack. Christine Gilley posted this picture on her Facebook page during their trip.

SALISBURY — Slowly, morsels of information about the Gilley family are filtering in amidst the shock, but they come now as memorials to lives well lived.

Jack and Grace loved swimming with the Sailfish Aquatics team in Concord. Their mom, Christine, was a fixture at the CrossFit Vitality training facility, also in Concord. C. David Gilley, her husband, worked hard as a senior project manager for the TIAA investment firm.

Vacationing together was something the Gilleys tried to do as much as possible, and they were heading toward Christine’s parents’ home in Irondale, Ohio, Thursday when a fiery wreck on Interstate 77 claimed all of their lives.

A tractor-trailer, traveling southbound on I-77 in Mercer County, W.Va., crossed through the median and smashed into the Gilleys’ northbound SUV.

A celebration of the lives of David, Christine, Grace and Jack Gilley will take place a 3 p.m. Friday in the Omwake-Dearborn Chapel at Catawba College. A reception will follow in the Crystal Lounge on the Catawba campus.

The children’s schools — Jack was a fourth-grader at Bostian Elementary, and Grace was a seventh-grader at Salisbury Academy – are on spring break.

In a statement, Salisbury Academy officials said they were grateful to Catawba College for assisting with the service to honor the Gilley family.

Salisbury Academy will have a private vigil Monday night in memory of the Gilleys.

Lizzy Roy, director of marketing and communications for Salisbury Academy, released the following statement from the school Saturday morning about the tragedy:

“It is with deep sorrow that Salisbury Academy mourns the loss of the Gilley Family – Dave, Christine, Jack and Grace.

“Grace, a seventh-grader at Salisbury Academy, was a light-filled spirit and epitomized every aspect of true grace. She was a friend to all of her classmates, beloved by faculty, and had a tremendous heart. She was beautiful inside and out.

“Words are not adequate to express the loss of Grace and her family. Our prayers of sympathy, love and support go out to all who knew and loved them.”

Roy asked that media not attend the vigil planned for Monday, “as this is too much for our students, parents and staff to take in as we grieve.”

“It is with great sadness that Rowan-Salisbury Schools learned that one of our Bostian Elementary fourth-grade students, Jack Gilley, was involved in an accident that took the lives of his entire family.

“This is an unexpected and deep loss for the Bostian family and for all of Rowan-Salisbury Schools. Our district’s crisis intervention team is available for students, staff and families, and they will be continue to be available when students and teachers return from Spring Break on April 24. The team will provide support for as long as needed.

In a separate Facebook post, Vedeikis wrote that Jack was one of her precious, smart and fun-loving fourth-graders. He enjoyed Harry Potter and was full of life, she said.

As with other fourth-graders, he was learning to play the recorder.

“We are all heart-broken, shocked and so devastated,” Vedikis said.

David Gilley was a biology graduate of the University of North Florida. Christine graduated from Fauquier High in Warrenton, Va., and later earned her degree in business administration and accounting from Mary Washington College in 1996.

Christine played college basketball, and her enthusiasm for fitness carried over into motherhood. Steve Pinkerton, co-owner and coach of CrossFit Vitality, dedicated his blog Friday to memories of Christine.

Pinkerton expressed the feeling of disbelief many of the family’s friends were coping with this weekend.

“It has taken me a while to try and process this, and I am not sure it will ever sink in or make sense,” Pinkerton said.

Over five-plus years, Pinkerton said the staff and patrons at CrossFit Vitality watched Grace and Jack “grow up in front of our eyes” at the gym, often happily joining their mother in her workouts.

Christine was a fixture in Pinkerton’s morning classes. He described her as stubborn, thick-skinned, a jokester, routinely late but often more determined than anyone else. She attacked her health and fitness goals, Pinkerton said.

“One thing that I know with 100 percent certainty,” Pinkerton wrote in his blog, “is that she was super happy. She had emailed me a few months back and told me about how great David was doing and how the kids were in a great place in school.

“She had told me how happy she was in her new job and how much fun she was having with her ability to spend more time with her family. It was as happy as I (had) seen her since starting at Vitality.”

In a personal Facebook post in February, Christine Gilley seemed to confirm these impressions. She described how in a former job she dreaded Sundays and Mondays when she had to fly somewhere away from her family.

It was making her miserable, she said.

Christine added she took a 25 percent pay cut for a new role “that allows me a better work life balance and allows me to be home every day with my family.”

“And I don’t regret a single cent,” she said.

“She had made the changes in her life that made her the happiest and made her family most happy,” he said. “She left us with that lesson and the realization that we don’t have complete control over when our time here ends.”

A Linked In profile for Christine Gilley described her as a senior manager for the Cloud First Applications Team at Accenture.

On Facebook, Kristy Wheeler-Scott said of her high school friend: She was my partner in crime, my kindred spirit, my dearest friend of 30 years.”

One of the family’s last vacations together was a trip to Florida in late March.

The Concord Church of Christ held a vigil for the family Friday night, according to reports.