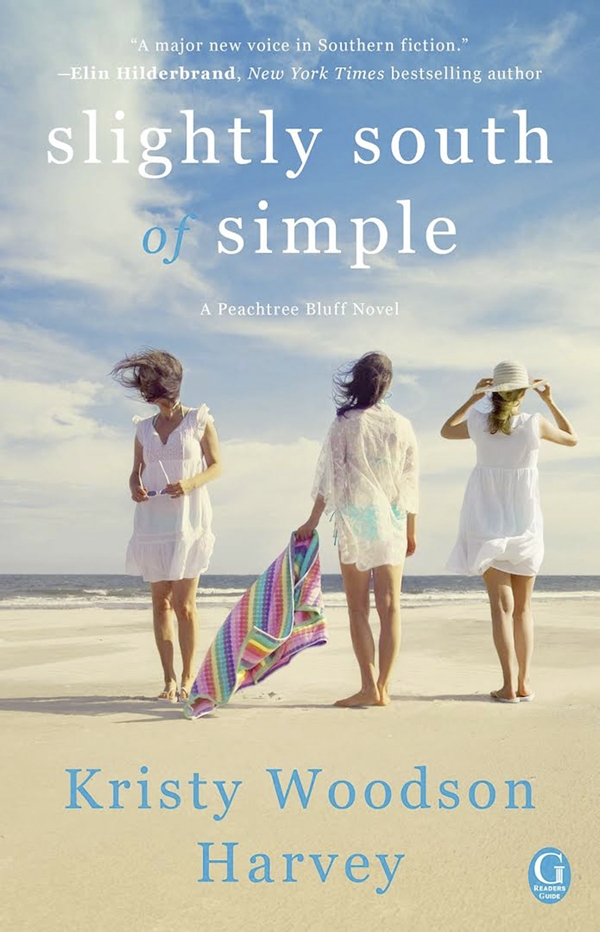 As the start of a trilogy, Kristy Woodson Harvey’s “Slightly South of Simple,” is full of possibilities.

She’s writing about sisters and their mother, exploring those relationships, exposing their weaknesses and strengths.

Not only has she conceived a trio of lively young women, each with different dreams and goals, she has also created a believable mother who has found the truth — there is life after 50.

This opener, with so many open plot lines, should create an audience who will follow the characters through two more books.

Told with the heart of “Dear Carolina” and the enthusiasm of “Lies and Other Acts of Love,” “Slightly South of Simple” takes a deeper look into what a family is, what family means, and who we are together and apart from family.

Ansley is the mother, a widow with busy daughters and a great house that once belonged to her mother in Peachtree Bluff, Ga., a place very similar to Beaufort, N.C., where Harvey now lives.

Ansley has a sweet decorating business, with clients from around town and on the boats that moor on the waterfront. She has a comfortable routine, knows everyone and everyone knows her. You know it can’t last.

Almost instantly, she learns her daughters are coming home to roost — to her quiet, settled life. At the same time, she’s hired to redecorate an old boat and discovers its owner is Jack, her first love, a man she does not want to see again and does want to see again.

Secrets are numerous in this breezy community. But family ties could not be tighter.

The first daughter to stake a claim is Caroline, the one Ansley finds hard to love. Caroline, hugely pregnant, arrives with 11-year-old daughter Vivi after finding out in the most public way that her husband is having an affair with a super model — on a reality TV show.

Caroline is the prima donna, the one who can’t imagine life outside New York City. She has relied on her rich husband to provide all her wants. She must have designer clothes, and she is obsessive about food, exercise and weight.

Her idea of revenge is to max out his credit cards. She will NEVER take him back. So she says.

Actress Emerson announces she will be staying for a while because she’s shooting a movie in the area. But she’s very mysterious about what the movie is about.

And Sloane is coming home while her husband is deployed in Iraq. She needs her mother to help her cope with his absence and their two boys.

Ansley goes from happy empty nester to hostess, laundress, cook, shopper, cleaner — you name it, she’s in deep. Not that she doesn’t love her children and grandchildren, it’s just that … What’s she going to do with Jack back in town after all this time? And what if Jack starts to talk about the past?

The book is told through Caroline’s perspective alternating with Ansley’s, so Harvey has to make Caroline a little sympathetic, beyond the affair. Luckily, the sisters have a bond that makes them likable. Emerson is obsessing about her weight for the film and looking for love.

Sloan is the stalwart, being brave for her boys, putting on a happy face for her sisters, especially the suffering Caroline.

Ansley has been widowed 17 years — husband Carter died in the 9/11 attacks in New York. She has never allowed herself to think about another man, never dated. She’s happy and fulfilled with her life as it is.

So, all the women are at a crossroads. Will Caroline be able to raise two children on her own — in the style to which she has become accustomed?

Will Sloane’s husband, Adam, finally leave the Army to spend more time with his family? A tour in Iraq is a frightening assignment.

Will Emerson have an acting career? Is she becoming anorexic for this role? What about her love life?

And what about Ansley? Jack is so happy to see her, to have her back in his life, but Ansley is so cautious, for so many reasons, some of which will be revealed in a jaw-dropping manner that author Harvey says is based on a true story.

For romantics, that’s a good reason to keep turning the pages. Harvey captures the young women and their mother equally well.

Harvey, a smart and clever young woman, knows the cadence of life in the South. There’s a certain sunny drowsiness at times, paired with bold action. The language is right and creates a feel for Peachtree Bluff, because she’s based it on her town, right down to the island across from Ansley’s house — Starlight Island in the book, Carrot Island across from the Beaufort waterfront.

Perfect beach read? Yes. But don’t think of it as a book to leave in the sand. There are two more books coming so Emerson and Sloan will get their own stories. The second book is already in the publishing process.

In this third book, her growth as a writer shows. She’s taking more risks, exploring more serious territory. She has a deft hand at relationships and feelings, and she throws in good doses of humor along the way.