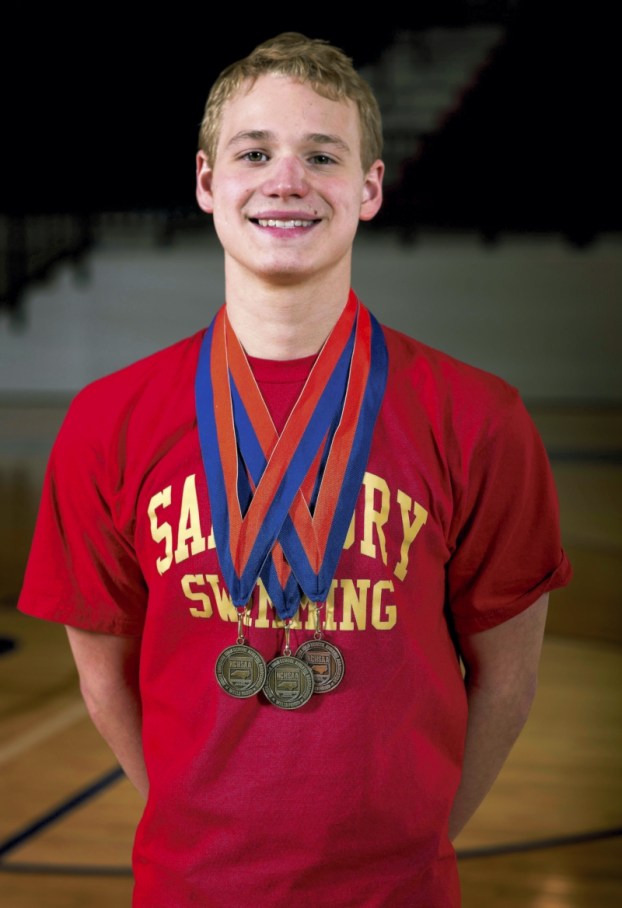 SALISBURY — Any Rowan County swimmers who want to play Follow The Leader can line up behind Salisbury’s Ethan Knorr.

The junior is in uncharted waters after winning two individual events at last winter’s 1A/2A state championship meet and setting a state record in the 500-yard freestyle. His reward was an obvious one — a third consecutive county Boys Swimmer of the Year award.

“It still thrills me to win,” Knorr said recently. “To be able to put myself up there with the best, that’s such a good thing. Especially this year. There was more competition in the county, but I know what I do best and I did it.”

“I knew I was a big favorite coming in,” Knorr said. “But still, when I touched and saw the scoreboard, it was overjoyed emotion. Winning by more than four seconds, that was one of those ‘I-did-it’ moments.”

“Ethan’s pretty special,” he said. “His leadoff leg in the 400 free would have won the 100 (freestyle) in this year’s state meet. But that’s him — very self-disciplined. If you put a set on the board, he’s going to try to beat it. I can be on the side of the pool, shouting encouragement and helping him pace, but he’s the one in the water who has to do it.”

Knorr has been in the water since kindergarten, when the infatuation seed was planted. It has since yielded a decade-long harvest.

“They’re a swimming family,” said Starrett. “I had his older sister (Allie) and brother (Stefan), and there are twin sisters coming up.”

Knorr credits Stefan, currently a non-swimming student at the University of Alabama, for making his first strokes memorable.

“He got me into the pool at five-years old,” he said. “I saw him doing it and thought I’d like to try to be like him. He’s my big brother and he seemed to be having fun.”

By age 9, Knorr became what he calls, “a serious swimmer,” and was hooked. “I realized I was pretty good at this,” he recalled.

“I remember thinking how cool it would be to represent my country,” he said. “Anyone who swims would love to do that. And watching Phelps — he’s just the best — and I’d love to be the best.”

It’s that competitive drive, that inner determination, that fuels Knorr’s desire to improve. When Salisbury’s season is over, he spends the remaining nine months of the year training with Brad Herndon, a coach with the Greensboro Community YMCA Makos.

“Our team has a lot of high-level swimmers,” Herndon said. “We have a coach who swims for Stanford, Daniel Le, who helps us out. I asked him to look around and tell me which of our guys could swim for Stanford. He said Ethan. He works hard in the pool and he’s always thinking. It’s more than just swimming back and forth. He’s thinking the whole time. We don’t mess with smart swimmers.”

Herndon said Knorr’s improvement level has been off-the-charts. With continued training and development, he believes greatness may be lurking around the next bend.

“For Ethan, it’s all about developing early speed,” Herndon said. “He’s a distance swimmer and can easily repeat the things he already knows he can do. But he needs the confidence to turn it up and win faster, to go faster earlier in his races.”

It’s easy to forget that Knorr is still a level-headed, 16-year-old. There’s more to his profile than swimming. He’s already thinking about college and beyond, as long as it involves water and a pool.

“I’m looking at Division I schools,” he said. “I want to go into the science field in some capacity. And I hope to swim in college.”

“Just stop, look around and re-evaluate,” he indicated. “Can I take this to a whole different level? I don’t know for sure, but it’s still fun. I joined because it looked like fun and I keep going because I want to get better and better. That’s all it is.”

In addition to Knorr, earning a spot on the all-county team for their performances at the Rowan County Championships were: