Back Creek Bluegrass Boys: Ministry with their music 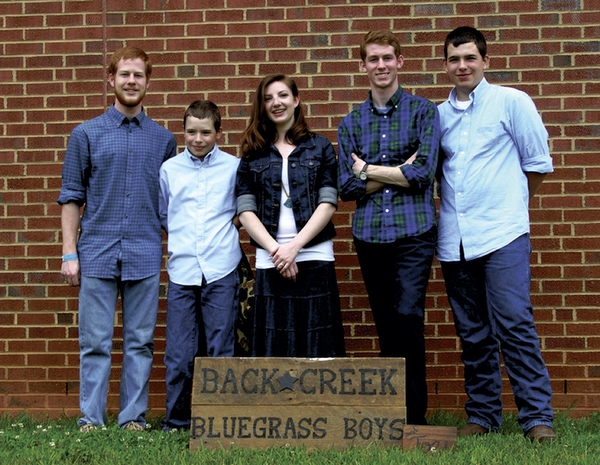 Tori actually has a little ‘and Tori’ that she has added to the Back Creek Bluegrass Boys wooden sign. L-R: Will Thrailkill, James Lee, Tori Jones, Daniel Thrailkill and John Lee. Photo by Bill Thrailkill

Will and Daniel Thrailkill were homeschooled as children and every morning meant gathering around their mother’s piano to sign hymns. Each child took turns picking the hymn of the morning. Will said, “I started playing the piano at age 7 or 8. Mom taught us how to read music and sing in harmony.” Mom is Angela Thrailkill, wife of Bill who just happens to be the pastor at Back Creek Presbyterian Church.

And so it began, a time of early appreciation for music. Daniel began to play the mandolin and the guitar and found he had a real affinity for bluegrass. In 2013, Bill brought home an upright bass and said, “Someone needs to learn to play this!” Daniel was the first to play it, then Will, mostly so he could play along with Daniel.

Will and Daniel were invited to Pop’s Picking Place in rural Rowan near Salisbury where they soon began to play with lots of older and much more experienced pickers. Will said, “You sign in when you get there and then when it’s your turn, you stand up and pick a tune. Then everybody who wants to play joins in. It is where we learned to improvise. I watched the other bass player and learned from him. The average age of the other musicians is about 75 and they didn’t care if we messed up or not.”

Will and Daniel kept working at becoming better musicians as teens while John Lee, another Back Creek member, took a different path. The story goes that he heard Walls of Time, an old bluegrass tune, on the way home from the hospital as a baby and has been hooked ever since. John wanted a banjo at age 7 and played one a year later.

Daniel and John were both taking lessons from John Marler of Statesville and they occasionally saw each other there. Daniel said, “Even though we went to the same church, we didn’t know each other well.” A chance meeting when both Daniel and John came to the same jam at CJ’s in Cleveland got things started and soon they were playing together with Will.

John, turning 16 next month, remembers the group getting ready to go on stage at the Union Grove Fiddler’s Convention when the boys realized that they didn’t have a name. Daniel said, “Well, we all go to Back Creek, so how about the Back Creek Bluegrass Boys?” The name stuck, the band won 2nd place which meant a prize of $5 and a ribbon. Will said, “I got the ribbon and the others divided the money.” John added, “I went right away and spent my winnings on a drink.”

While Daniel, Will and John were growing up and honing their musical skills, a female fiddle player named Tori Jones was doing the same in Davidson County. Tori started playing classical music on the violin at age 5, then changed over to bluegrass at age 10. She did outdoor events with her sisters, aptly known as The Jones Sisters. Tori kept practicing and playing in competitions until Daniel asked her to join the boys on an upcoming CD. Daniel said, “I would see her often but it took me a while to talk with her. She joined us in the summer of 2015. The name is still a work in progress. Tori actually has a little ‘and Tori’ that she has added to the Back Creek Bluegrass Boys wooden sign.”

Joining an all-male band didn’t bother Tori at all. She said, “The bluegrass scene is predominantly male, so I am used to being one of the only girls in a jam. Coming from a family of girls, I have come to think of all of them as brothers.”

Joining the four older band members on occasion is 12 year old James Lee, John’s brother. John said, “James will play more with us as he gets older, but in the meantime, he enjoys riding his bicycle, hunting and fishing, his squirrel dog named Pete and collecting old bottles.”

All the band members have future plans, sort of. None of them want to give up playing their music but in the meantime, they will keep moving forward. Will, turning 22 in August, is a junior at UNCC, majoring in mechanical engineering. Daniel, soon to be 20, attends Mitchell Community College but plans to eventually get a four-year music degree. He already teaches music privately. Tori, 18, plans to pursue her degree at Becklee online and also wants to teach music. John has plans to attend college and is looking at the possibility of becoming a veterinarian or an agricultural mechanic. The band members were homeschooled through high school, something that is not uncommon in the bluegrass community. John said, “It gives us a better opportunity to make it to competitions or out of town events.”

All the band members also play in other bands. Will and Daniel’s other band, The Trailblazers, also features Alex Edwards of Salisbury and Jonah Horton of Wilkesboro. Tori still plays with The Jones Sisters and so does John, resulting in yet another name dilemma.

Offering their combined music as a ministry is a common thread for all. Will said, “As believers, we know that the Lord gave us our musical gifts and we sing to praise Him.” Tori added, “Music speaks to people in places where we can’t always talk to them.”

Daniel said, “The Lord is our strength. We never ask for a certain amount of money to play, just a donation if moved to do so. We have taken payment in chicken, biscuits, pizza and spaghetti. Our music is family friendly and it is hard to be sad when listening to bluegrass.”

The band members credit their parents and the community for their success and popularity. The future looks bright with a summer full of bookings and three songwriters in the group. Angela Thrailkill said, “God has brought them together so that they can share the gospel in a different way.”

John Lee added, “And we get to play music all the time.”