Prep Baseball: Mustangs cruise in first round of tournament 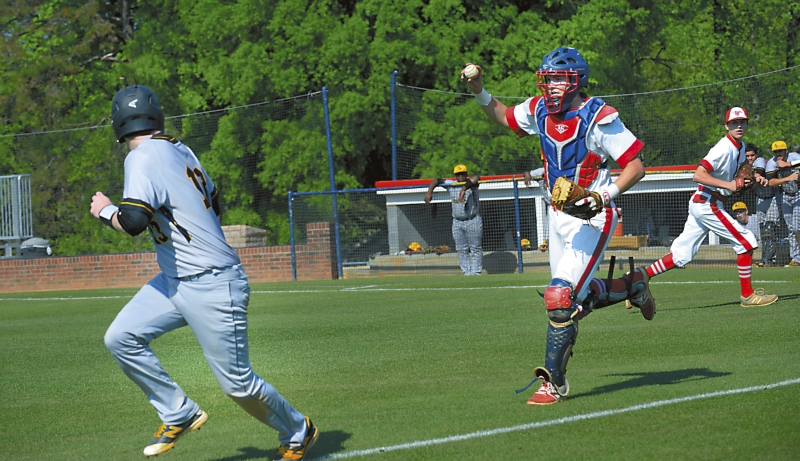 Wayne Hinshaw/for the Salisbury Post ... Forest Hills’ Brayden Wallace is caught in a rundown as East Rowan catcher Trevor Scruggs chases him back towards third base. In the background, pitcher Jake Davis circles around to cover home plate.

GRANITE QUARRY — The numbers don’t lie and the stats say only one hitter on the East Rowan squad entered Saturday morning’s game against Forest Hills with a batting average higher than .275.

That hitter is senior Chandler Blackwelder, who has separated himself from the rest of the Mustangs when it comes to offensive efficiency. He checks in at .443 (31-for-70).

Blackwelder’s opponents in the South Piedmont Conference know him well, so they pitch around him. But against an unfamiliar foe in the East Rowan Spring Break Classic, Blackwelder was treated like a normal guy. He got pitches to hit even when there were bases open. The results were two doubles down the left-field line and a booming triple to center in four trips to the plate. His slugging led East to a 10-3 victory over the Yellow Jackets.

“Both doubles were on pitches where they were trying to come inside, and the triple was on a hanging curve,” said Blackwelder, who is committed to UNC Pembroke. “It was fun playing against someone who didn’t know me, but the biggest thing was playing a day game. I was seeing the ball a lot better.”

While East had an unusual 10 a.m. starting time on Saturday, the Mustangs (13-7) will move into prime time at 7 p.m. for a Monday semifinal at Staton Field against South Iredell, a 5-2 winner over Central Cabarrus.

Besides Blackwelder, the story for East was freshman lefty Jake Davis, who made his third start of the season. Davis pitched five innings for his second win.

“He was locating his fastball and change-up” East catcher Trevor Scrugg said. “I tried to keep him on his toes, and he was hitting his spots.”

Davis faced only three batters in the first, but in the top of the second disaster threatened. That inning started with a walk and a hit batsman, and everyone was safe when Forest Hills starting pitcher Jordan Helms got a bunt down with two strikes after fouling off two pitches. With the bases full, Davis got a strikeout for the first out, and the Mustangs executed to thwart a squeeze play for the second out. Jacob Clontz, the No. 9 batter, then golfed a pitch right off his cleats for a two-run single.

“He hit a pretty good pitch there — Jake hit his spot — but that was just a good job of hitting,”  Scruggs said.

Giving up two runs on a good pitch — to the bottom guy in the lineup — could’ve rattled Davis, but he got a ground ball from leadoff man Titus Sanders and got through the inning. That was the only moment where East was in danger of losing the ballgame, but Davis handled it.

“We gave them the base runners for those first two runs they got, and I’m not happy with that, but this was a good game for Davis to get some experience,” East head coach Brian Hightower said. “He settled in pretty well after the second inning. He’s going to be a good one for us.”

The pivotal at-bat of the game came in the bottom of the second with Forest Hills (3-11) trying to hold that 2-0 lead. Matthew Mathis and Will Brown stood on the corners after reaching base via walks, and Blackwelder strolled to the plate with two men out. In a South Piedmont Conference game, Blackwelder isn’t going to see a strike in that situation, but Forest Hills challenged him. He whipped a double into the left-field corner, and East was on the scoreboard. After a wild pitch, it was 2-2. After Blackwelder swiped  home, East led, 3-2. Hayden Setzer and Jax Fitz both hit balls hard that hung in the air a long time. Both balls fell safely, and East led 5-2. After Mathis, getting to the plate for the second time in the inning, stroked a bloop single, the Mustangs led 7-2 and were in control of the game.

“We did swing it pretty well, but some balls dropped in for us today that are usually outs in our league games,” Hightower said.

Brandon Griffin’s RBI double followed two East errors and cut the Mustangs’ advantage to 7-3 in the third.  Right fielder Fitz caught a flyball  and threw a strike to Scruggs  for an inning-ending double  play.

Blackwelder’s one-out triple in the bottom of the inning — a rope over the center fielder’s head —led to two more runs. He knocked in Brown. John Owen’s ground ball got Blackwelder home for a 9-3 cushion.

Davis enjoyed a breezy fourth against the bottom of the FH  lineup. Another double by Griffin in the fifth didn’t lead to any runs. Davis induced a bouncer to third baseman Bryson Wagner for the third out.

East’s final run was driven in by Scruggs in the fourth — the Hot Dot Shack Inning. That meant free food for everyone who kept their ticket stub and made Scruggs a crowd favorite.

“We really needed a game where we hit like this,” Blackwelder said. “We got a lot of timely hits.”

Corbin Moss pitched the sixth and seventh for the Mustangs and put up two zeroes with defensive assistance. East turned a nice DP in the sixth — with the second out coming at home. Then Brown laid out for a diving catch in center in the seventh.