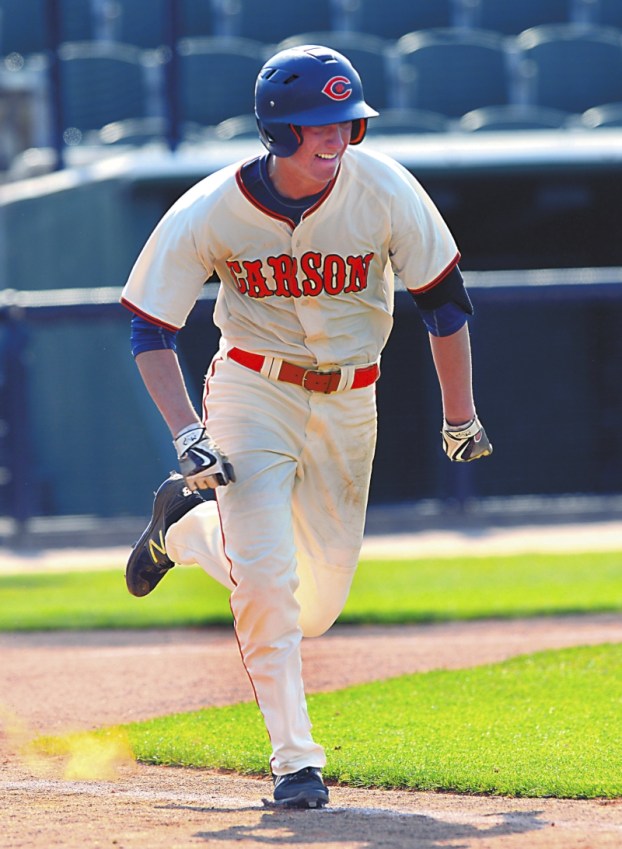 KANNAPOLIS — The way Logan Ridenhour figured it, stopping now was not an option for Carson’s baseball team.

So the senior infielder jumped to his feet and raced home with the decisive run Saturday night at Intimidators Stadium — where the Cougars rallied past A.L. Brown, 3-2, and into Monday’s F&M Bank Baseball Classic title game.

“We had the momentum with us,” Ridenhour said after going 2-for-3 and scoring all three Carson runs. “So we just kept it going. We’re a tough team to beat when we play like this.”

The victory pushed Carson (14-6) to its fourth straight win and into a championship showdown with Lake Norman. It has never won the tournament.

“We’ve been to the championship game one time and didn’t win it,” said Carson coach Chris Cauble. “We normally open it with Lake Norman, at least we have the last two or three years, and it’s usually been a 1-0 or 2-1 game. We’ll have to bring our ‘A’ game.”

Brown (15-4) brought its ‘E’ game last night. The Wonders committed four errors and allowed three unearned runs — including the game-winner with nobody out in the bottom of the seventh inning. It tarnished a solid performance by losing pitcher Matt Baucom, who limited Carson to six hits and struck out eight in six-plus innings.

“The one thing we haven’t done much of this year is beat ourselves,” long-time coach Empsy Thompson said after Brown’s six-game winning streak was curbed. “We did a pretty good job of making routine things difficult. Give Carson credit for putting the pressure on us.”

The Cougars found themselves a run down on two occasions. Ridenhour — who led of the first, third, fifth and seventh innings — helped Carson tie the score 1-1 in the last of the first. He grounded a base hit into right field and advanced to third base when the ball skipped past outfielder Keyon Rice, then scored on Ben Shoaf’s groundout.

In the fifth Ridenhour lined a 2-2 pitch into right for a clean single, took second on a wild pitch and third on a bounce-out. He scored when Shoaf’s hard grounder was misplayed by second-baseman Lane Argabright, tying the score 2-2.

The Wonders received run-scoring hits from Baucom in the first inning and Argabright in the third. They managed only four singles against winning pitcher Maddux Holshouser, a junior southpaw, who was more resourceful than scary in a complete-game effort.

“I knew I had to hit my spots and let the defense work behind me,” he said after inducing 11 groundouts. “The curveball was my best pitch because it had a lot of movement and I was getting rollovers. It was my groundout pitch.”

Holshouser braided his curve with a garden-variety fastball and a mesmerizing change-up, retiring 11 of the last 13 batters he faced. He earned his fourth victory after Ridenhour coaxed a four-pitch walk to open the seventh and took second on Owen White’s perfectly placed bunt single to the left side.

“It was an ideal time to bunt the runner into scoring position,” said Cauble. “But Owen is my best hitter so I really didn’t want to give him up. I told him if he wanted to drag bunt, I’d rather he dragged one than try a sacrifice.”

With two runners aboard, Shoaf dropped a sac bunt that Baucom fielded without a hitch. But his throw to third-baseman Jacob Tuttle sailed high and wide of the mark down the left-field line. Ridenhour, who slid head first into the bag, quickly righted himself and raced home to win it.

“Oh, he would have been out (at third base),” Cauble conceded. “The ball would have beat him. But if you put the ball in play and make teams make plays, sometimes good things happen. If you don’t put it in play, nothing good can happen.”

NOTES:  Argabright, Rice and Antonio Knight had sacrifice bunts for the Wonders. Brown will face Mount Pleasant in Monday’s 4 p.m. consolation game. … White had the game’s only extra-base hit, a stand-up triple to the right-center gap in the last of the third. … The tourney final starts at 6:30 p.m. Lake Norman (16-3) has won its last three games.

LOS ANGELES (AP) — He was the first black man to play in the major leagues, ending six decades of... read more