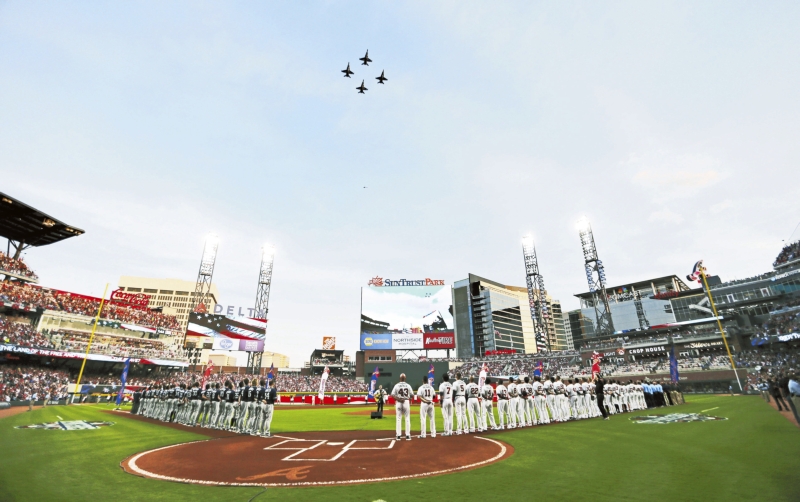 United States Navy fighter jets fly over SunTrust Park during the national anthem before a baseball game between the Atlanta Braves and the San Diego Padres in Atlanta, Friday, April 14, 2017. The Braves are playing their first regular-season game in SunTrust Park, the new suburban stadium that replaced Turner Field. (AP Photo/John Bazemore)

Julio Teheran (1-0) was a bit wild but lasted six innings. He gave up both San Diego runs, working around four walks and two hit batters. Jim Johnson worked the ninth for his second save.

Markakis, who grew up in nearby Woodstock, put the Braves ahead in the first with a two-run double off Jhoulys Chacin (1-2). Inciarte gave Atlanta some breathing room in the sixth with a two-run shot into the right-field seats, his third homer of the season.

There was plenty of pomp before the game as the Braves moved into the suburban stadium, which replaced their downtown home of the last two decades, Turner Field.

Ten retired numbers were unveiled on a facade down the left-field line, and seven of the greats — Aaron, John Smoltz, Tom Glavine, Phil Niekro, Bobby Cox, Chipper Jones and Dale Murphy — were on hand for the ceremony.

Then it was time for the 83-year-old Aaron to throw out the ceremonial first pitch, reprising the role he filled for the first and last game at Turner Field. Needing a cane for his walk to the field, Aaron steadied himself with one hand before flipping the ball underhanded to Cox.

Inciarte beat out an infield single to start the home half of the first. He raced around to third on Freddie Freeman’s double, and both runners trotted home when Markakis doubled to deep right.

The Padres tied it up in the second, taking advantage of Teheran’s wildness. Ryan Schimpf walked and Erick Aybar was hit by a pitch, setting up Chacin’s run-scoring dribbler and Manuel Margot’s RBI single.

Teheran paid back Chacin in the fourth, driving in the run that put the Braves ahead to stay with an infield single of his own. Inciarte, coming off a two-homer game at Miami, went deep again in the sixth after Craig Stammen relieved Chacin.

With three homers in two games, Inciarte matched his power output for all of last season.

SunTrust Park hosted a couple of games before the official opening night — a Braves exhibition against the Yankees on March 31 to wrap up spring training, followed by a college baseball game last weekend between Georgia and Missouri.

This was the first real test before a packed house. The stands were full before the first pitch, indicating no major traffic issues at a stadium that sits at one of the busiest interchanges in a city notorious for its bumper-to-bumper jams.

Padres: RHP Trevor Cahill (back) is on track to return from the 10-day disabled list on Sunday. He gave up two earned runs in 5 2/3 innings in his first start, a loss to Dodgers.

Braves: OF Matt Kemp (hamstring) ran before the game and isn’t expected to need a rehab stint in the minors before he’s eligible to return on Tuesday. … Reliever Mauricio Cabrera (elbow strain) threw a bullpen session before the game. Manager Brian Snitker said the hard-throwing right-hander is “feeling great and ready to go,” but no word when he’ll come off the DL.

Braves: RHP R.A. Dickey (0-1) will have the distinction of pitching in three different Braves stadiums. He was part of Team USA at Atlanta Fulton-County Stadium during the 1996 Olympics and an opposing pitcher when the team played at Turner Field. Now, he’ll get the nod in the second game at SunTrust Park.