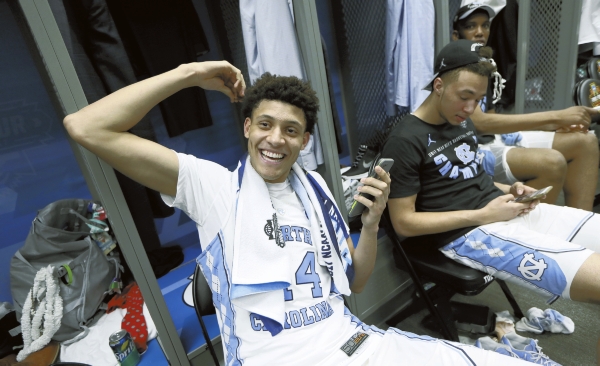 FILE - In this April 4, 2017, file photo, North Carolina forward Justin Jackson talks on his cell phone in the locker room after the championship game against Gonzaga at the Final Four NCAA college basketball tournament, in Glendale, Ariz. The school said Thursday, April 13, 2017, that Jackson will enter the NBA draft as a junior and hire an agent. (AP Photo/Mark Humphrey, File)

RALEIGH (AP) — North Carolina’s Justin Jackson accomplished his goals when he returned to Chapel Hill last season, both by improving his shot for the NBA level and helping the Tar Heels win a national championship.

Now the first-team Associated Press All-American is hiring an agent and entering the NBA draft.

The school announced Jackson’s decision Thursday, 10 days after the Tar Heels won their sixth NCAA title by beating Gonzaga. The ACC player of the year is projected as a first-round pick, with some mock drafts putting him at the edge of the lottery.

“I wouldn’t trade anything the last three years as a Tar Heel, especially getting the chance to win a national championship, which was unbelievable,” the junior said in a statement. “I feel I made a good decision last year to come back for my junior year. That has put me in a much better position as a basketball player and a person. I’m proud to know I will always be a Tar Heel.”

The 6-foot-8 wing from Tomball, Texas took advantage of new rules last season making it easier for players to declare for the draft and work out for NBA teams while maintaining their college eligibility provided they don’t hire an agent. He blossomed after an offseason of work, going from averaging 11.5 points and shooting 29.7 percent on 3-pointers through his first two seasons to 18.3 points while making a program-record 105 3s this year.

He also significantly improved his defense, including his effort to keep Kentucky’s Malik Monk in check during the NCAA Tournament’s Elite Eight after Monk scored 47 points in a December meeting.

“He did what our coaches and the NBA people advised him to do — get stronger and work on making more shots,” coach Roy Williams said in a statement.

The Tar Heels will lose at least three of their top four scorers with Jackson joining departing seniors Kennedy Meeks and Isaiah Hicks.

It’s unclear if Final Four Most Outstanding Player Joel Berry II (14.8 points) will return for his senior season. Freshman big man Tony Bradley (7.1 points, 5.1 rebounds) told the AP after the title game that he will declare for the draft to get NBA feedback — though his father later told Inside Carolina that the family is still discussing options.