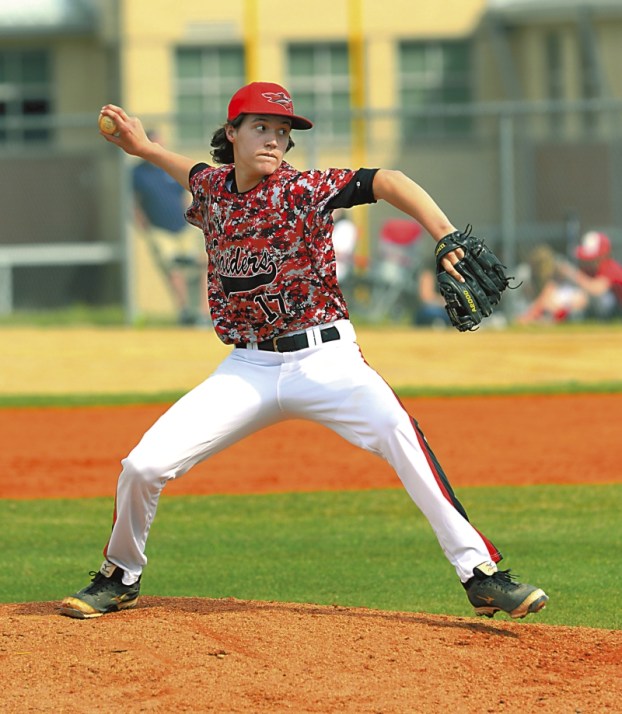 KANNAPOLIS — No one does Easter tournament baseball better than South Rowan, but the Raiders were handed a rare holiday loss by Lake Norman left-hander Jonathon Perez on Friday morning.

“Their coach (former big leaguer Ty Wigginton) was telling me before the game that he didn’t know if he had anyone left to pitch,” South coach Thad Chrismon said. “But he was just kidding around. After the game he told me, ‘Yeah, that was our  best guy.’ ”

Perez tossed a 1-0 shutout to kick off the latest F&M Bank Classic at Intimidators stadium, and Lake Norman avenged a wild, extra-inning loss to the Raiders in last year’s championship game. South also had beaten Lake Norman in a first-round matchup in 2015.

It was only the second setback for South in its last 16 outings at the spacious stadium in Kannapolis. South hoisted Easter championship trophies in 2014 and 2016, went 2-1 for third place in 2015, and also went undefeated when the tourney had a round robin Cabarrus vs. Rowan format in 2012-13.

Perez, a junior, put the brakes on all that South success by striking out eight, walking two and limiting the Raiders to five singles.  Perez is  now 6-0 with an ERA of 0.39 for the season. This was his second shutout. He blanked a stout Hough team in March.

“It’s not like his speed was overpowering,” South right fielder Dillon Norton said. “But his curveball was tight and he located it well.”

South (13-6) stayed in the game because Norton, who is South’s No. 2 pitcher, threw two men out at the plate with strikes from right field and because Matt Donahue, a junior reliever who is No. 4 on the South pitching depth chart, tossed a complete game. Donahue kept some big swingers off-stride. South fielders spent their time camping under routine popups or gloving ground balls.

South, the home team, hit into double plays in the first, second and fifth. That kept the Raiders from mounting any offense. South, which averages 5 runs per game, was shut out for the first time this season

It was scoreless for three innings.  A ringing double down the right-field line by Perez and a two-out bloop single by Alex Pfeil plated the game’s only run in the fourth. Pfeil tried to score from second on another hit, but Norton charged and winged a missile home, and catcher Jarrid Nelson put the tag on the incoming runner.

“Whenever we believe we’ve got a chance, they let me throw it,” Norton said. “Our pitching was a little depleted today with me throwing Tuesday and Walker Joyce and some relievers pitching Thursday, but Donahue went out there and did a great job for us. We didn’t expect him to throw a complete game against those guys.”

Donahue struck out four, walked one and allowed five hits.

Lake Norman (15-3) tested Norton’s arm on another two-out hit in the fifth — and got the same result. Out by a lot at the plate.

South’s best chance to break through against Perez came in the bottom of the fifth when Tyler Shepherd started the inning with a walk and Norton bounced a single. Nelson went to the plate to sacrifice, but Perez struck him out for the pivotal out of the game. Then Garrett Harrington slapped one right back to Perez, and he started a sharp twin killing to end the threat.

“We got good pitching from Donahue and we made some plays behind him, but what we didn’t do a good job of was a laying off pitches out of the strike zone,” Chrismon said. “Their pitcher was really good at getting ahead, and then getting us to chase his pitch.”

South had two on and two out in the sixth, but Perez struck out Hayden Wilson, the slugging hero of South’s 15-12 win against Hickory Ridge on Thursday.

Nelson smacked a solid single with two away in the seventh, but Perez wasn’t flustered. He calmly ended the game with another strikeout.

Lake Norman takes on Mount Pleasant today at 4 p.m. in the winners bracket. South will be in a losers bracket contest against South Piedmont Conference rival Robinson at 11 a.m. South beat Robinson in eight innings, 7-6, in March. The two teams have another SPC meeting coming up on April 25.