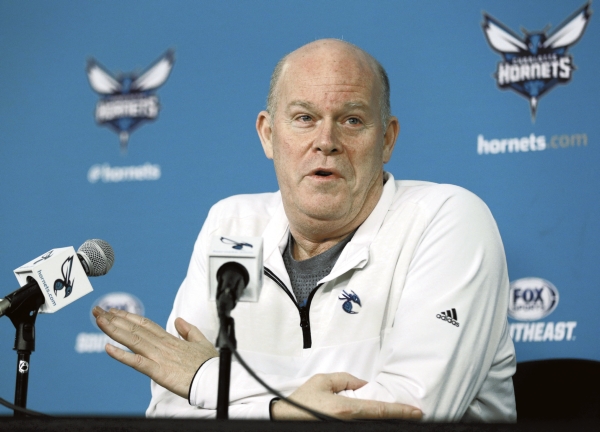 Charlotte Hornets: Defense was the problem

Hornets' season is over CHARLOTTE (AP) — Steve Clifford sat behind a table in the Hornets arena lamenting his team’s defensive struggles in what he deemed a “disappointing” 2016-17 season.

Which is ironic, considering Hornets owner Michael Jordan hired Clifford because of his defensive coaching skills. Not to mention add Charlotte’s great defense is what the Hornets hung their hat on in Clifford’s first three seasons — two of which resulted in playoff appearances.

But defense disappeared this year, particularly late in games. Now the Hornets will be watching the playoffs from home.

“Our offense is not the problem, it was the defense,” Clifford said. “The defense didn’t get better.”

It figured to be the other way around after the Hornets lost Jeremy Lin, Courtney Lee and Al Jefferson to free agency last summer and returned top defender Michael Kidd-Gilchrist from a shoulder injury.

Instead, the Hornets fell to 13th in points allowed — although that doesn’t begin to tell the whole story.

Clifford points out Charlotte dropped from fourth in 2015-16 to 27th this season in “clutch defense,” a statistic used by the NBA to measure a team’s productivity in the final five minutes of regulation and overtime in games decided by five points or less.

Charlotte’s 1-on-1 defense was a huge problem, Clifford said.

Teams routinely got past Hornets defenders at the point of attack and found easy kick-outs to the wing for open 3-pointers. Charlotte’s 3-point defense was among the worst in the league.

“I felt like that when the game mattered last year we might not be scoring, but the other team didn’t score either,” veteran forward Marvin Williams said. “This year we were able to score but we weren’t able to get stops.”

Some other learned during the Hornets season:

LOSING TIGHT ONES: Losing close games became contagious, said reserve forward Frank Kaminsky. Charlotte was 0-6 in overtime games and 0-9 in games decided by three points or less. “There were so many games where they didn’t make enough plays at the end,” Kaminsky said. “That started at the beginning of the year and it felt like it was a trend that continued throughout.”

BRIGHT SPOT: All-Star point guard Kemba Walker turned in one of the most productive seasons in franchise history, finishing second overall in points scored (1,830) and sixth in the NBA in 3-pointers made (240). “He was a monster this year,” Kidd-Gilchrist said. Walker said he will not need surgery after missing the final two games with a hyperextended knee.

BENCH PLAY AN ISSUE: Although Kaminsky made big strides, Charlotte’s bench play was never a strength and will be an area the team will look at upgrading in free agency or the draft. “Our depth was a problem,” Clifford said.

TIGHT UNDER THE CAP: Charlotte isn’t expected to be much of a player for big-ticket free agents because most of its cap money is committed to existing players. All five starters — Walker, Nic Batum, Williams, Kidd-Gilchrist and Cody Zeller — are still under contract next season. Williams said having all five starters back will help the team’s continuity. “I don’t think people understand how much of a difference that makes when you get to training camp,” Williams said. “You don’t have to waste any time getting used to the guy.”

James understands the Cavaliers appear vulnerable, perhaps beatable as they enter the NBA playoffs following a recent tailspin. However, he feels the grind may help the Cavs and maybe even give them an edge.

“Through everything that went on with our team, we’re in a position where we can do something special still,” he said Thursday as Cleveland prepared to face Indiana in the opening round on Saturday. “We have a chance to win it all.”

Why so optimistic, LeBron?

The Cavs have a chance to win a championship because they have James, and with James, all is possible.

With six straight visits to the Finals on his resume, James knows his way around the playoffs better than any player in the league, and maybe better than anyone in history. After all, he’s won titles with two teams, snatched a road win in 25 consecutive series and takes a 40-17 record in first-round games into this series with the Pacers, a team he’s battled in postseasons before.

James doesn’t know how to be anything but confident. It’s in his DNA.

But there’s genuine concern about these Cavaliers, who staggered down the stretch. They lost their final four regular-season games — one to an Atlanta team resting all its starters — and surrendered the No. 1 seed in the Eastern Conference to Boston. Cleveland went just 23-23 after Jan. 10 and the Cavs have been ranked in the bottom third statistically on defense all season.

They are defending champions in name only.

Injuries, too, have played a role in Cleveland’s fragmented, and some would say disappointing season, as 22 players have shuffled in and out of coach Tyronn Lue’s rotations and the club was forced to go long stretches without key players like Kevin Love, J.R. Smith and Kyle Korver.

If it’s true that adversity builds character, the Cavs might be a lot are stronger than they appear.

They are healthier than they’ve been in months, and James said that’s all that matters now.

“At the end of the day, I’m not going to harp on what happened in the regular season through injuries, through bad losses, through good wins, through whatever the case may be,” he said. “We have a good club going into the postseason. That’s all you can ask for.”

While this idea the Cavs can be bounced from the playoffs makes for engaging sports talk shows, not everyone is convinced James and Co. won’t find their groove in the postseason.

If any team can flip the switch, it might be this one.

“They’re the champs for a reason,” Toronto point guard Kyle Lowry said Wednesday night after Toronto beat Cleveland. “I would never say that (the Cavaliers are vulnerable) — ever. Every team wants to be the champions, and that’s what they are. You can’t ever say that about any team with LeBron James.

“I’m sure they’ll get it going once the playoffs start.”

Cleveland’s schedule — the Cavs played 12 road games in March — made it difficult to practice and James said it was “refreshing” to be on the floor with his teammates. The Cavs reviewed film with Lue, whose defensive scheme will be focused on slowing Pacers star Paul George, before their workout.

Afterward, James was serious, but spirited as he talked with reporters and assessed his team’s odds in the East, where the road to the Finals figures to be much tougher than past years.

James recognizes the Cavs’ flaws and understands why they appear susceptible to an early-round upset. But there’s no sense in reliving a 7-10 record in March, 3-4 mark in April or the reasons behind Cleveland’s slide.

“The present is the only thing that matters,” he said. “Me preparing this group, me getting this group locked in and understanding what our opportunity is. I mean it is what it is. Let’s get ready to go. We’ve got to have our mind sharp, our bodies as fresh as possible going into Game 1.

“You guys can harp on the regular season. I’m not one to do it, not with the postseason starting right now. I feel great. I’m not going backward.”

BIG QUESTION: The Hornets clearly missed a rim protector this season. They signed Roy Hibbert last offseason, but he played only one game before his knee flared up and he was never the same. The Hornets eventually dealt Hibbert and Spencer Hawes to Milwaukee for Miles Plumlee and his $12 million-a-year contract. That decision has thus far failed to pay dividends as Plumlee averaged just 2.5 points in 13 games while battling injuries.