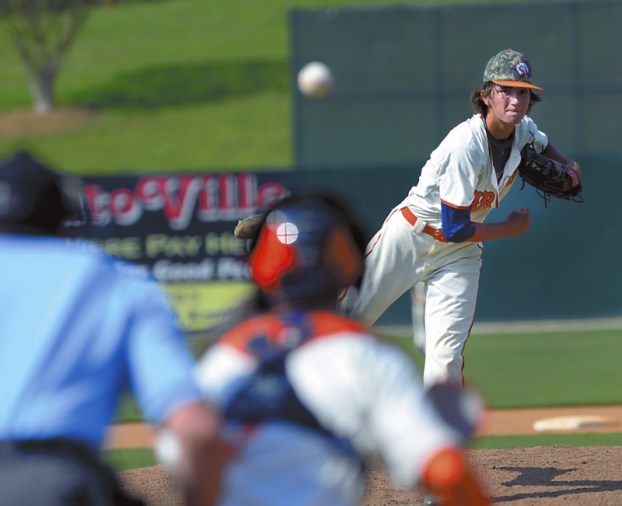 Wayne Hinshaw/for the Salisbury Post …
Carson shortstop Cameron Prugh comes over to cover third base as Salisbury’s Bo Rusher slides into the bag during Friday’s game in the F&M Bank Classic at Kannapolis. Rusher was called safe on the play.

KANNAPOLIS — It was another good day at the office for Owen White and the Carson High School baseball team.

White struck out 11 batters in six innings Friday afternoon at Intimidators Stadium, where the Cougars earned a 6-2 victory against Salisbury in the F&M Baseball Classic.

“The goal today was to come out, relax and just play our game,” White said after Carson (13-6) banged out 12 hits and won its third straight decision. “We accomplished that. We put together a lot of timely hits, pitched well and played defense.”

White allowed one earned run on five hits and threw first-pitch strikes to 23 of 21 Salisbury hitters. He casually won his fifth game of the season, but his best position may have been the batter’s box. There he went 3-for-4 with a double and three RBIs.

“We finally put a few hits together,” winning coach Chris Cauble said. “It felt like we left a lot of runs on the base paths, but we hadn’t been even getting them there lately. So we took some baby steps.”

Tall right-hander Hut Smith was tagged with the loss. He yielded three runs on eight hits and issued four walks in 4 1/3 innings.

“We have two conference games next week,” Salisbury coach Mike Herndon said, after the Hornets (10-6) had their five-game winning streak snapped. “And we played two this past week. Our pitching is kind of depleted. But Hut, he hung in there. He started out a little nervous, but then settled down and attacked the (strike) zone.”

Smith, a 6-foot-7 senior with a big motion, escaped trouble in the last of the first inning when shortstop Griffin Myers initiated the first of two Salisbury double plays. In the second inning, the Cougars strung together four hits and reached him for three runs.

“We just cleared our minds today and tried to relax,” said Carson outfielder Luke Barringer. “We were swinging to hit instead of trying to do too much.”

Barringer, a sophomore with a modest .277 batting average, reached base three times and delivered the game’s first run when he tripled to left-center field, launching a shot that one-hopped the outfield wall. “It was a 3-1 count and I got my pitch,” he said afterward. “Right where I wanted it.”

Barringer scored when teammate Garrett Alewine served a base hit into right field. A third run crossed when White grounded out with the bases loaded.

Salisbury scored its first run in the top of the third on Chandler Lippard’s bad-hop single into center. But the Hornets ran themselves out of a potential bigger inning on a botched delayed steal. With runners at the corners and two away, Lippard began a leisurely break toward second base. White stepped off the rubber, pump-faked at Lippard, and fired a strike to nail Myers, who had strayed off third base.

“It was an early steal,” Myers said after collecting two of Salisbury’s nine hits. “(White) has such a good move, but my coach told me to go, so I went. I thought he threw it (to second), but he still had the ball in his hands.”

“We work on that every day,” White added after throwing 85 pitches, mostly fastballs and changeups. “It was nothing new. Just had to stay calm.”

Herndon was as surprised as anybody.

“We were trying to steal a run there, but he gave us a good arm-pump fake,” he said. “A normal high school pitcher doesn’t make that play. You’ve got to be smart to do that — and he’s smart.”

An inning later the Hornets squandered Blaine Shellhorn’s leadoff hustle-double to right. He was erased on Will Taylor’s bouncer to White, who fired a strike to shortstop Cam Prugh for a tag-out at second base. “Most pitchers go to first on that play,” Herndon said.

Not White. It was his two-run double down the left-field line against Lippard — who had relieved Smith — that gave Carson a 5-1 sixth-inning lead. Two batters and a stolen base later, White scored on Maddux Holshouser’s infield hit.

Salisbury threatened in the top of the seventh against Carson fireman Devan Gay. The Hornets managed four hits but only scored once — on Bo Rusher’s RBI-single. Third-baseman Cole Hales made a web gem of a play, snagging Myers’ bullet line drive and doubling up baserunner Jack Fisher.

“It wasn’t a conference game, but it still mattered,” Barringer said. “We didn’t feel the same kind of pressure, but we still had to play.”