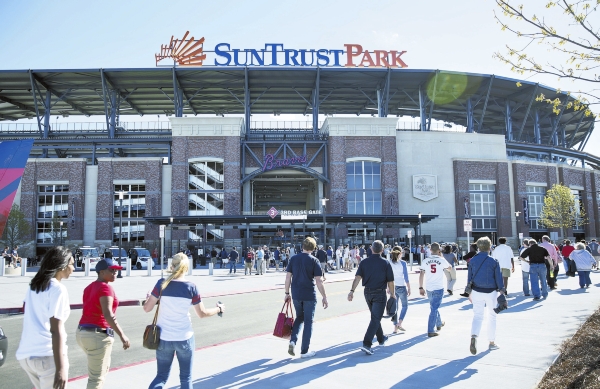 FILE - In this March 31, 2017, file photo, fans head to SunTrust Park before the Atlanta Braves open their new ballpark for an exhibition spring training baseball game against the New York Yankees, in Atlanta. After a short 20-year stay at Turner Field, the Braves begin their SunTrust Park era on Friday night, April 14 in their home opener against the San Diego Padres. (AP Photo/David Goldman, File) FILE – In this March 31, 2017, file photo, usher Melvin Russ dances in the aisle during the sixth inning of an exhibition spring training baseball game between the Atlanta Braves and the New York Yankees at the Brave’s new stadium, SunTrust Park, in Atlanta. After a short 20-year stay at Turner Field, the Braves begin their SunTrust Park era on Friday night, April 14 in their home opener against the San Diego Padres. (AP Photo/David Goldman, File)

A sellout crowd will be watching when the Braves finally play their first regular-season game in SunTrust Park against San Diego on Friday night.

After struggling on a long road trip to open the season, the Braves are glad to finally play in their new home.

“It’ll be fun,” said catcher Tyler Flowers. “The city is excited. Of course we’re excited. I think everyone is anxious to see the new stadium. We’re excited to play in it.”

It will be the first real test of the suburban park’s ability to accommodate Atlanta’s traffic. The issue was complicated by a fire under an overpass that has shut down a section of I-85, one of the major interstates in the city, for several weeks.

After only 20 years at Turner Field, originally built for the 1996 Olympics, the Braves moved north to Cobb County. A large complex around the stadium will include a hotel, apartments, restaurants, concert venue, office buildings and other businesses.

Commissioner Rob Manfred, who plans to attend Friday night’s game, said the development is a game-changer for baseball.

“There has never been something this massive around a baseball stadium and it’s really an amazing accomplishment,” Manfred said last month.

The Braves see the complex as a place fans can be entertained before and after games. There will be staggered openings of businesses the remainder of the year.

The park handled its first test when many fans arrived early for an exhibition against the New York Yankees two weeks ago, but only season-ticket holders were invited. On Friday night, an expected crowd of 41,000 will double the demands on access and parking.

Braves management tried to fortify a rebuilding team for the first season in the new park by adding Matt Kemp and Brandon Phillips to the lineup and veteran Bartolo Colon, R.A. Dickey and Jaime Garcia to the rotation.

A strong finish to the 2016 season could not lift the Braves out of last place, but it bolstered hopes the 2017 team would be more competitive even as most of the top pitching prospects are still in the minors.

“We’re sort of at the end of the transition time,” Braves chairman Terry McGuirk said before the season. “We haven’t harvested all of these great young players yet but we have a meaningfully good team.”

Atlanta is only 2-6 and again last in the NL East after beating Miami 5-4 on Wednesday night to end a five-game losing streak.

NOTES: A statue honoring Hall of Fame manager Bobby Cox was unveiled at the stadium on Thursday. The statue depicts Cox standing on the top step of the dugout. … The Braves ask fans to arrive early and say parking at lots controlled by the team must be purchased in advance at www.Braves.com/parking.