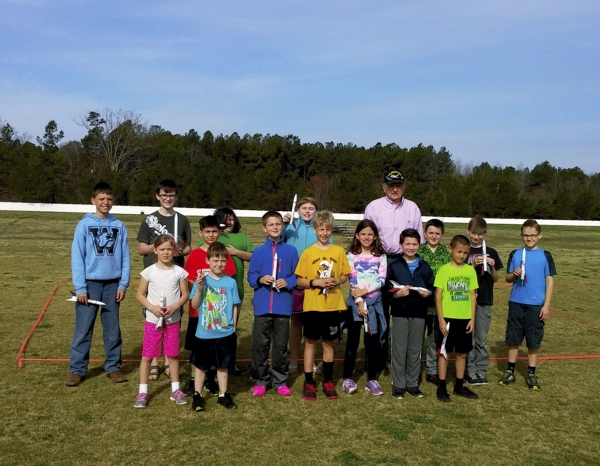 The group stands with their rockets. Submitted photo A rocket lifts off. Submitted photo

It really wasn’t the Fourth of July, like the song — but it was a celebration of all things skyward on a recent Saturday at Salisbury Community Park.

Roughly 32 children came with parents, grandparents and friends to launch rockets that each child constructed the previous Saturday at Franklin Presbyterian Church under the direction of flight director James Williams.

Three launch pads were set up for liftoff. At 10 a.m. sharp, the kids arrived and retrieved their rockets. All rockets were secure: fins were tightly affixed, re-entry parachutes rolled, inserted and attached to the body, and the fuel charges were securely in place.

One by one, each boy and girl proceeded to the launch area, accompanied by an adult, and slid their rocket down the guidewire and onto the pad.

Wires were painstakingly attached to the apparatus, and all was ready. After all were moved away from the launch area, the child, assisted by the flight personnel, put their finger on the button.

The charge was ignited and the mighty (well, maybe mini-mighty) spacecraft left the launchpad. Higher and higher it rose — five, then 10, then 15, then 20 stories or more into the air. Then, at its zenith, the parachute deployed and each rocket drifted lazily back to earth.

The audience cheered with the rising of each rocket — 32 in all. Each rocket had an important payload: a message of love through Jesus Christ.

Before the day was over, the Franklin Presbyterian Youth Rocketeers had a new record, as one rocket rose higher than a 39-story building — almost higher than the eye could see. That rocket was built by a 4-year-old girl.