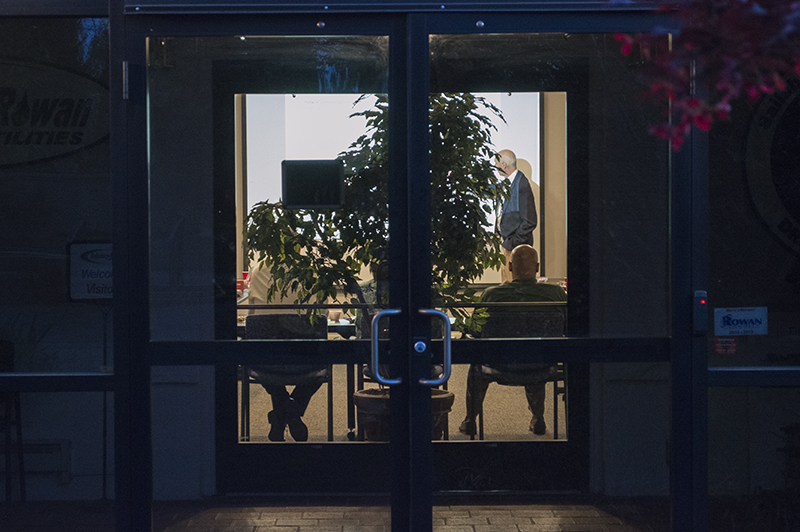 Josh Bergeron / Salisbury Post - Salisbury City Council members and business leaders met on Wednesday in what was largely a closed-door meeting to discuss the future of Fibrant and receive a proprosal from an interested company.

Editor’s note: This article has been corrected to state that Steve Fisher sits on the Fibrant advisory committee and works as F&M Bank chairman and CEO.

SALISBURY — A business advisory committee and city officials met Wednesday, largely in private, to discuss the future of Fibrant, the municipal internet, TV and phone service.

It was the first meeting for the committee, which was assembled earlier this month to provide advice to the Salisbury City Council about selling, leasing or finding someone to manage Fibrant. One unnamed company made a presentation during Wednesday’s meeting.

Another meeting is set at 7 a.m. today. Two more businesses are scheduled to present proposals.

As of the latest city audit, Fibrant had more than 3,500 customers. It requires slightly less than $3 million in debt-service payments per year. Its three core operations are cash-flow positive, but income doesn’t cover expenses and debt service.

City Councilman Brian Miller said Fibrant’s challenge is that it’s too small to achieve savings from “economies of scale.” The ongoing process aims to solve that problem, Miller said.

“These folks who we are talking to are able to do things, negotiate contracts, etc., at a better rate than we are,” he said.

For about 40 minutes Wednesday, the advisory committee and City Council met in public at the Salisbury-Rowan Utilities building at 1 Water St. The meeting then moved into closed session. Mayor Karen Alexander cited economic development, without any specifics, as the reason to move into close session and not violate public-access law. City officials also have cited economic development as a reason not to provide the proposals to purchase, lease or manage Fibrant.

After entering closed session, the group moved a fake plant in front of the building’s glass doors in an attempt to prevent anyone from viewing a projection screen inside the room. Part of the closed session included a presentation by a company interested in Fibrant.

The meeting ended about 9 p.m.

Roughly 30 minutes before the end of the meeting, City Councilman Kenny Hardin left. He declined to answer any questions about Fibrant. Mayor Pro Tem Maggie Blackwell did not attend Wednesday’s meeting.

During the public portion of the meeting, the City Council heard an update on the state of the internet, TV and telephone industries from Tom Asp, an analyst and engineer for CTC Technology and Energy. Salisbury hired Asp to facilitate the process of finding a buyer, lessee or manager for Fibrant.

When asked about the advisory committee, business leaders said they volunteered for the group because of Fibrant’s importance to Salisbury and a desire to offer business expertise.

“You know, I really enjoy being involved in community service,” Caldwell said. “So anything I can do to help, I’m willing to do that.”

She said members of the advisory committee could use their experience examining financial documents and business plans as well as making difficult business decisions.

“In the health care industry, my God, it’s an up-and-down kind of business,” she said. “You have to be able to look very critically at all the aspects of a situation. … I think all of the folks in this room have a lot to bring to the table from the perspective of their various businesses.”

F&M Bank Chairman and CEO Steve Fisher said he wanted to serve on the committee because Fibrant “is one of the biggest issues that’s facing our community.”

“The old adage that there’s wisdom in a multitude of counsel is true, and I think there’s a good opportunity to bring folks together who run businesses,” Fisher said.

He said members of the advisory committee will be able to look at offers for Fibrant objectively — “highly objectively” as he put it.

“They may not have the ability to stand back and look at it from a different perspective because they’re involved in it and have been since the day they took office,” Fisher said about members of the City Council.

Power Curbers President Dyke Messinger said he is going to wait to “pass judgement” until he’s heard all necessary information. Messinger said the future of Fibrant is a challenging decision.

Other than Caldwell, Fisher and Messinger, members of the business advisory committee include: