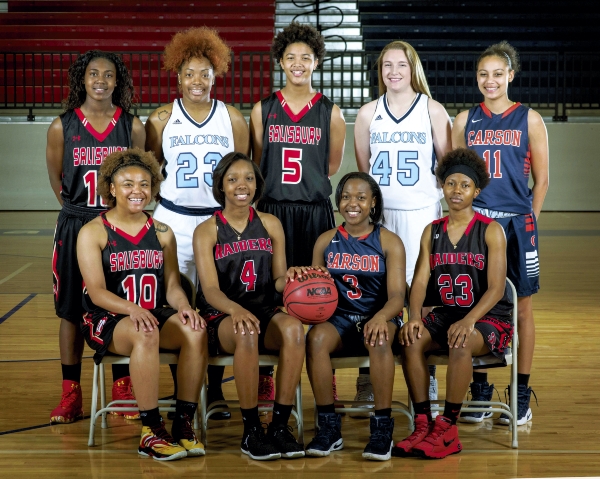 Janiya Downs, South Rowan, 5-10 So. — Downs, who produced 20 double-doubles in a 26-game schedule, heads one of the youngest All-Rowan County girls teams in history.  There are no seniors on the first team and only two on the second team, with two more girls on the honorable mention list. In other words, 12 of 16 honored players will be eligible to return. Downs repeats as a first team pick.

Bryanna Troutman, Salisbury, 6-0 So. — The only thing that separated Downs from Troutman is that Downs, who usually was facing more challenging competition, was more likely to bring it for the full 32 minutes. Troutman is at least as talented as Downs, and like Downs, she was a double-double waiting to happen. She averaged 15.8 points. 12.3 rebounds, 3.5 steals and 2.9 blocks, and there’s little doubt she can raise those outstanding numbers in the future. Troutman made the second team as a freshman.

Olivia Gabriel, Carson, 5-5 Jr. — Gabriel’s shooting percentage wasn’t great (31 percent), and that’s the only thing that kept her out of the player of the year conversation. She was tremendously important to Carson’s 21-win season, as she closed half those victories with her ability to control the ball and make foul shots (71 percent). Small but strong, she averaged 15.8 points, 5.6 assists, 3.7 rebounds and 2.9 steals. Gabriel moves up to first team after two seasons on the second team. Gabriel has scored 1,192 career points and has a great chance to surpass Kelly Dulkoski (1,458) as Carson’s all-time scorer next season.

McKenzie Gadson, Carson, 5-8 So. —  Gadson was, by far, the most efficient player in the county, shooting a sensational 55 percent from the field. She makes every layup and rarely forces a bad shot. She averaged a team-high 8.6 rebounds and added 3.0 steals per game at the front of Carson’s pressure defense. Gadson made the second  team as a freshman.

Egypt Alexander, West Rowan, 5-10 Jr. — Surpassed 1,000 career points during the season. West lacked the experienced guards it had during Alexander’s sophomore year, so Alexander became the  focus of every opposing defense Her shooting percentage (38) dropped off from her spectacular sophomore season, but she still managed to average 15.5 points and 6.6 rebounds. She repeats as a first team pick.

Tazah  Hardin, South Rowan, 5-6  Jr. — “Z” is the county’s quickest player, and that attribute translated into  serious numbers. She averaged 10.7 points, 9.9 rebounds and a county-leading 5.7 steals. She produced so many steals she was able to put up three rare triple-doubles, and she had 11 double-doubles. She even had a 20-rebound game. She’s not a great shooter yet, but if she can add a consistent jumper, there won’t be any stopping her. She was honorable mention as a sophomore.

Tyzarea Alexander, Salisbury, 5-7 Sr. — Alexander is a 5-foot-7 girl who doesn’t shoot 3-pointers, but the Christmas tournament MVP was tough in the lane and made enough 12-footers  and free throws to average 13.3 points per game.  She averaged 5.4 rebounds and played through injuries that would’ve put others on the bench. Coach Lakai Brice called her the “heart and soul” of the CCC champions, and she was right. Alexander was honorable mention as a junior.

Brianna White, North Rowan, 5-10 Sr. — One of the county’s best year-round athletes, the springy, rangy White, who also excels in volleyball and track and field, averaged 12.2 points and 8.9 rebounds. She had a 32-point explosion against East Rowan. She was honorable mention last season.

Abigail Wilson, West Rowan, 5-10 Fr. — There’s a lot to like about Wilson, who doesn’t do anything flashy but consistently rebounds and puts the ball in the hole. She averaged 13.0 points while shooting 48 percent from the field and she pulled down a team-best 9.3 rebounds.

Anayia Fulson, Salisbury, 5-8 Fr. — Fulson is strong, fast, can score inside and out and is headed for an exciting career. She displayed an advanced all-round game for a youngster, averaging 12. 7 points, 5.8 rebounds and 3.3 steals.

Maria Capito, Salisbury, 5-6 Jr. — Capito’s role  basically is to shoot 3-pointers, but she excels at it. She made 44 triples to lead the county and averaged 11.2 points per game.

Mary Sobataka, West Rowan, 5-6 So. —The shots weren’t dropping for Sobataka this season (8.8 ppg.), but she defended tenaciously and led her team in assists and steals.

Riley Corriher, South Rowan, 5-6 Jr. — On a team with two tremendous players, it’s easy for Corriher to get overlooked, but she was a huge part of South’s jump to 14-12.  She averaged 8.5 points.

Adalie Harrison, East Rowan, 5-0 Fr. — When your best player is a 5-foot freshman, it’s probably going to be a long season, and it was a tough one for the Mustangs (4-20). Harrison scored in double figures six times and led East with 7.2 points per game.

Aundrea Godfrey, North Rowan, 5-7 Sr. — An injury kept Godfrey out until the Christmas tournament. She came back to average 7.5 points and 5.2 rebounds. She scored 23 against West Davidson.

Destiny Jackson, Carson, 5-6 Sr. — Jackson came back from multiple knee injuries to make big shots in the Christmas tournament. She knocked down a team-high 32 3-pointers for the Cougars.