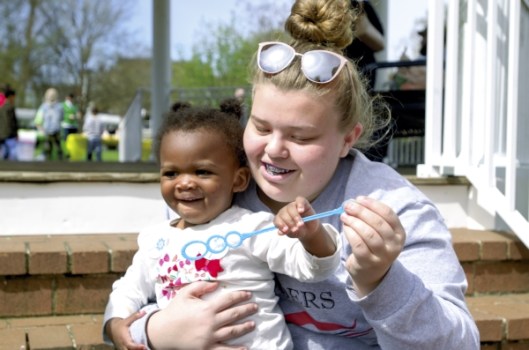 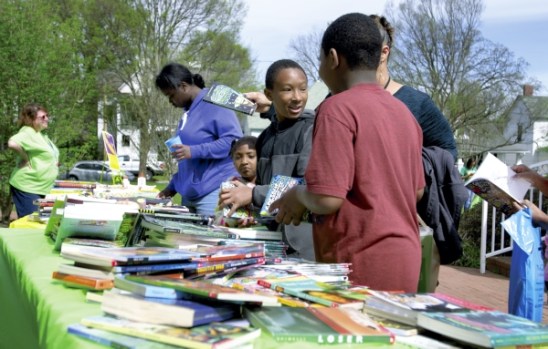 Kids look at free books at a Community Day in Spencer on April 8, 2017. Kristi Craven/Salisbury Post 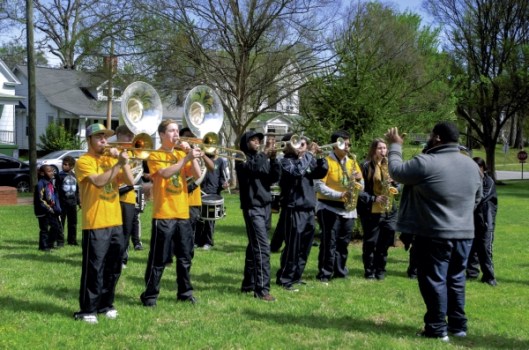 SPENCER — Schools in the North Rowan district have a strong sense of community. Staff members say the students, faculty and parents at the four schools often view themselves as pieces that make up a whole.

Staff members are actively working to strengthen those bonds, both between the schools and within the community. It was that thought that spurred Katiearl Bates to begin planning a North Rowan Community Day, which was held last Saturday in Spencer’s Library Park.

“We’re just trying to do more things in the community,” Bates said.

Bates, a first-grade teacher at Hanford Dole, said she and other educators began planning the Community Day in January after it was approved by the principals.

“I had kind of a dream, and they helped back it,” she said.

The schools pooled their Title 1 parent involvement money to make the day happen — using it to purchase books, literacy games and fun activities for students and parents.

“We kind of put together our resources,” Bates said.

Each elementary school child received a bag with a free book, set of flashcards, a literacy comprehension game and other items. Older children picked carefully through a table full of chapter books for something that sparked their interest.

For two hours on the sunny spring morning, children and parents wandered from table to table around the gazebo in Library Park. They talked to teachers, entered a raffle for bicycles or decorated cookies. The North Rowan High School marching band provided music, and organizations such as Nazareth Children’s Home and Prevent Child Abuse Rowan were set up to inform parents about services.

Engage North Rowan, a nonprofit group that provides family dinners to North Elementary students each Tuesday night, was on hand with canned goods and nonperishables for families in need.

Bates said the day served a few purposes. The first was to get parents involved in their children’s schools. Bates said it’s often difficult to get parents to attend school functions that are held on weekday evenings. She and other North educators thought they’d try something different.

It also helped pull the schools together. The North schools often have a transient population, Bates explained, with students cycling in and out. But that doesn’t mean they’re not connected. It’s not uncommon for a student at Hanford Dole to have a sibling who goes to North Elementary or North Middle. So it’s important for the schools to be close — in spirit, if not necessarily geographically.

Cowan, who helps lead the administration at North Middle and North High, said he and other administrators felt the time was right to host Community Day. There’s a lot of change happening in North Rowan. The community principal model of which he’s a part is a new structure that — as far as district staff are aware — is not used anywhere else in the country.

North Rowan High School and North Rowan Elementary were recently approved for a charter-like restart program that would grant them flexibility in the school calendar and hiring.

Bates said she was pleased with the day’s turnout. She and other organizers hope to make it an annual event.

“It’s been beautiful; it’s been awesome,” she said.