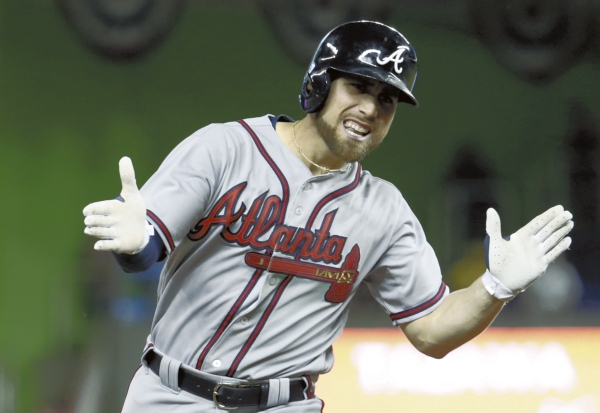 Atlanta Braves' Ender Inciarte celebrates as he rounds the bases after hitting a slo home run during the eighth inning of a baseball game against the Miami Marlins, Wednesday, April 12, 2017, in Miami. The Braves won 5-4. (AP Photo/Lynne Sladky)

Inciarte hit two home runs and Flowers had a go-ahead single in the ninth inning Wednesday night to help Atlanta rally past the Miami Marlins 5-4.

Stanton hit a pair of two-run homers, his first of the year, but Inciarte was his unlikely equal. The Braves center fielder came into the game batting .152, and the homers were his first this year after he hit three last season.

“You’re going to have games like this,” Inciarte said. “I know I’m not going to do it often, but I try not to be surprised when it happens.”

Freddie Freeman hit his third homer for the Braves, who went 2-6 on a season-opening trip before heading home to open their new ballpark Friday. They can only hope for the kind of success they’ve had at Marlins Park, where they’re 32-15.

Atlanta also hopes for a glitch-free day in the home opener against San Diego. The retractable roof at Marlins Park couldn’t prevent a 27-minute delay in the fourth inning during a thunderstorm that caused several banks of lights to go out.

It was the latest oddity in a long, strange trip for the Braves that also included stops in New York and Pittsburgh.

“We experienced just about everything you can on this trip — heartache, blizzards, taking naps on runways,” manager Brian Snitker said. “This has been one for the ages. It’s going to be really nice to get home.”

Inciarte gave Atlanta an early lead with a two-run homer in the third inning. His solo homer in the eighth off Junichi Tazawa made the score 4-all, and hiked his average to .189.

“He can be his own worst enemy sometimes,” Snitker said. “He’s kind of hard on himself, but the kid can hit. In 10 years he’s going to be a lifetime .300 hitter.”

With the score tied, Brandon Phillips walked in the ninth against A.J. Ramos (0-1), advanced on a two-out wild pitch and came home on Flowers’ sharp single. The big hit was a big change for the Braves, who came into the game batting .183 with runners in scoring position.

Jaime Garcia went five innings for Atlanta and gave up four runs, all on Stanton homers. Arodys Vizcaino (1-0) pitched a scoreless eighth, and Jim Johnson worked a perfect ninth for the Braves’ first save of the year.

“We need to do a better job of when we get a lead, hold it,” Koehler said. “Our offense did a great job. Anytime we get two home runs from G, we expect to win.”

Stanton’s first home run came in the third inning, when he lofted a drive that bounced off the padding atop the wall in left center. His second homer, a line drive in the fifth, landed in the swimming pool in the nightclub beyond left field, and a fan jumped in to retrieve the ball.

“Everybody has certain guys you feel more comfortable facing,” said Flowers, the Braves’ catcher. “That’s one of those where I guess next time we’ll walk him.”

Inciarte complemented his offense with two fine catches to rob Miami of hits.

“I want to catch everything,” he said.

Marlins SS J.T. Riddle earned his first major league hit by beating out a 60-foot check-swing dribbler down the third base line.

“Pretty crazy,” the rookie said. “It started foul and came back. It’s one I will never forget.”

Braves: RHP Julio Teheran (0-0, 0.00) is scheduled to start Friday when the Braves open their $622 million ballpark against the Padres.

The Cubs put the finishing touches on a celebration that started when they beat Cleveland in Game 7 last November to win the World Series for the first time since 1908. They raised the banner Monday night and got 14-karat white gold rings with a total of 214 diamonds in a ceremony Wednesday that drew more roars from the fans at Wrigley Field.

But once the game started, there wasn’t much to cheer.

Toles gave the Dodgers a quick lead with his drive off John Lackey to start the game, and it stayed 1-0 until the ninth.

A night after Boston’s bats put up eight runs, Baltimore returned the favor against knuckleballer Steven Wright by tagging him for six in a first inning that included back-to-back homers from Mancini and Jonathan Schoop. Adam Jones and Chris Davis each added a solo shot in the second.

Mancini hit his second home run in the third, marking the first multihomer game of his career. He finished with four RBIs.

NEW YORK (AP) — Jordan Montgomery got to Yankee Stadium about four hours before game time, had a few cups of coffee and prepared for his major league debut.

To get the nerves out of his system, the 24-year-old visited the ballpark a day earlier and tossed a ball across the near-empty field to bullpen catcher Radley Haddad.

“I was kind of in the stadium by myself, just kind of look around with nobody in the seats,” the 6-foot-6 left-hander said. “Really take it in.”

Mongtomery pitched before a far larger crowd Wednesday, one that included proud parents Raury and Jim.

He allowed a long two-run homer to Rickie Weeks in the first inning after a two-out walk to Evan Longoria, then settled in. He did not give up any more earned runs as New York rallied past the sloppy Tampa Bay Rays 8-4 to get back to .500.

PITTSBURGH (AP) — Amir Garrett was far from a phenom in spring training. In fact, the Reds rookie got hit rather hard.

Now that the season has started for real, the Cincinnati left-hander has been nearly untouchable.

Garrett threw another gem, taking a shutout into the seventh inning and leading Cincinnati over the Pittsburgh Pirates 9-2 Wednesday night for a three-game sweep.

Garrett gave up five hits, walked none and struck out five in 6 2/3 innings. In his major league debut last week, the 24-year-old pitched six scoreless innings to win at St. Louis.

This has come after he allowed 15 runs in 21 1/3 innings during the exhibition season.

The key for Garrett having more success in games that count has been throwing his changeup for strikes. It is a pitch most young pitchers have a difficult time mastering.

“I’ve been working on it in the bullpen and I really have confidence in throwing it right now,” Garrett said. “I just try to keep it in the zone because it tends to dive when it gets to the plate.”

Cincinnati has won seven of eight since losing to the Phillies on opening day. At 7-2, the Reds are off to their best start since 1990, when they won the World Series.

The Reds finished last in the NL Central in each of the previous two seasons.

“I think we all felt we had a chance to be better coming out of spring training, but sometimes you have to go out and play and assess where you are,” Price said. “I like what we’ve done so far. There is a much stronger sense of community and guys are seizing opportunities.”

Jose Peraza, Eugenio Suarez and Tucker Barnhart each had three of the 15 hits for the Reds, who didn’t homer for the first time this season.

Peraza had a two-run double to cap a four-run fourth against Ivan Nova (1-1) that broke a scoreless tie. Zack Cozart and Barnhart doubled to open the inning and Billy Hamilton’s single made it 2-0.

The Pirates were outscored 21-5 in the series and were hitless in 23 at-bats with runners in scoring position.

Suarez drove in three runs, including two with a double in a four-run seventh inning that stretched the lead to 8-0.

“It’s early in the season,” Nova said. “We just have to find a way for our offense to get going and our pitching to get better.”

Reds rookie RHP Rookie Davis was placed on the 10-day disabled list with a bruised right forearm, a day after he was hit by a pitch. Right-handed reliever Barrett Astin was recalled from Triple-A Louisville.

The Reds have not decided who will take Davis’ spot in the starting rotation Sunday against Milwaukee. Among the candidates mentioned by Price were a pair of relievers, left-hander Cody Reed and right-hander Robert Stephenson, along with Louisville righty Sal Romano.

SHIPPING UP TO BOSTON

The Pirates were originally scheduled to be off Thursday but will travel to Boston to make up a game with the Red Sox that was rained out last Thursday. Manager Clint Hurdle is looking on the bright side, though.

From staff reports Garrett Alewine drove in the tiebreaking run in the eighth inning, and Carson won at Northwest Cabarrus,... read more