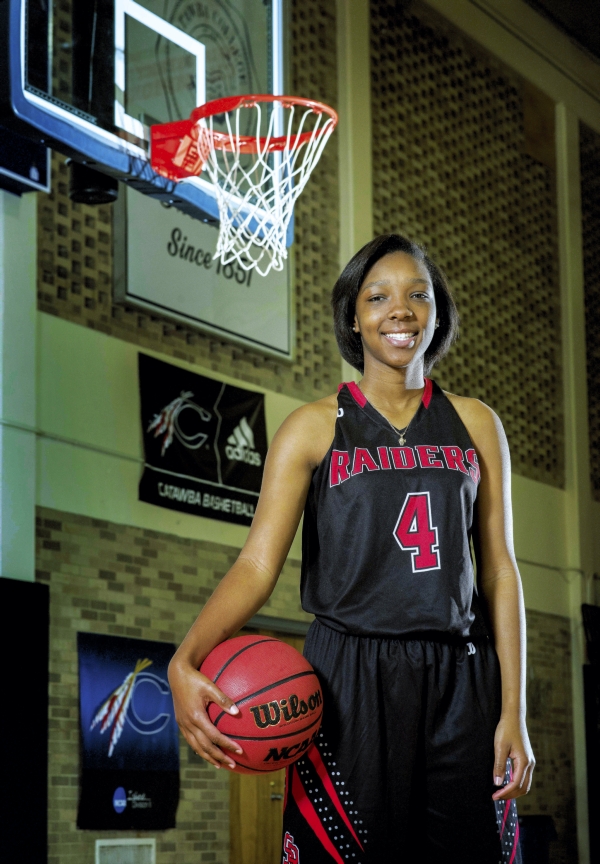 SALISBURY — South Rowan basketball sophomore Janiya Downs had a solid freshman year in 2015-16, scoring 419 points, but she didn’t go into this past season thinking about individual awards.

Downs set a new school scoring average at 20.8 points per game, on her way to 541 points, one short of Tracy Connor’s South Rowan mark set in 1990.

And the Raiders, under second-year girls coach John Davis, also improved, going 10-8 in the tough South Piedmont Conference and 14-12 overall.

Downs was voted Rowan County Girls Player of the Year for her efforts and has a chance to repeat once or twice, though the competition will be fierce during her junior and senior seasons.

“I wasn’t planning on this, but as the season went on, I started thinking that maybe, I could get Player of the Year,” said Downs. “It’s an honor and I’m really happy that I received it. And I know that in order to repeat, I’ll have to work even harder.”

For sure. Salisbury sophomore Bryanna Troutman, who was a teammate of Downs for years on the AAU Rowan Hurricanes, will be a force the next two years. West Rowan junior Egypt Alexander and freshman Abigail Wilson, along with Carson junior Olivia Gabriel and sophomore McKenzie Gadson, will also be in the mix. And who knows who else will be coming down the line.

But this year, the honor goes to Downs. With 960 points in two seasons, she is on a pace to break Avery Locklear’s school record of 1,795 points. She may also challenged the single game record, also held by Locklear at 43. Downs had 38 this year in a loss against West Rowan.

“This is a great honor for her and I hope that she realizes that because the strength of this county, from top to bottom, is outstanding,” said Davis, who coached boys at South Rowan before taking on the girls’ team. And for her to be player of the year as a sophomore is special. I couldn’t be more proud of her to accomplish this in only her second year.”

Downs, who led Corriher-Lipe Middle School to a seventh-grade title, describes her game simply as a “driver.”

“I’m definitely a driver,” she said. “I love to drive to the basket. I would much prefer to do that than pull up and shoot a jumper.”

Her coach sees it a little differently.

“She does drive to the basket but she has a good enough jump shot that teams have to respect that part of her game as well,” said Davis. “From last year to the end of this past season, she became a better basketball player. And, of course, the supporting cast around her has gotten better, too, and that’s important for all of us.

“Tazah Hardin (also all-county), Riley Corriher, Whitley Arnott, Brooke Lowery and others, it was a much better team this year,” continued Davis. “The improvement came from the hard work by all of them. The gym is open and they come in and get their work in and you can see them getting better as a team.”

Downs felt that it was important that Davis, seen pulling his hair out at times during that first season, returned as the Raiders’ coach.

“It’s pretty cool playing for Coach Davis because he had never coached girls and he picked us up for our four years — hopefully, for all of them,” said Downs. “It was good to not have a change after my freshman year and have Coach Davis back. We feel like we’re carrying the flag for South Rowan by winning some games.”

How good can Downs and the Raiders be?

“The entire starting five is back next year, but we’ve got to learn how to finish out some games,” added Davis. “We’ve got to learn how to play through foul trouble and we need to develop a deeper bench — and there’s going to be an opportunity there for some kids to help us get better. But it’s absolutely great to have that person like Janiya who can step up and take over a game. That’s what she does and she’s comfortable in that role.”

Downs gave thanks for her parents, Felicia and Jerry Martin, for “always being in my corner.” She just turned 16 years old on March 25 but is already getting some letters from colleges. She wants to play NCAA Division I basketball and become a teacher and a coach.

“I’ll go anywhere Division I,” Downs said, smiling. “It can be like the smallest DI around, but it’s still DI. That’s my goal and I’m going to work to achieve it.”