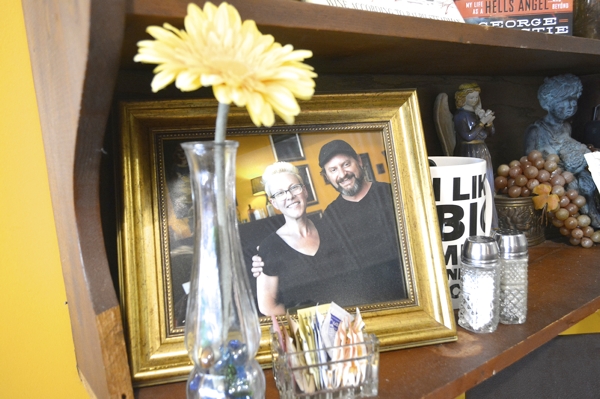 Susan Shinn Turner/For the Salisbury Post Heather and Scott Teeter have owned Sweet Meadow Cafe for seven years, but it’s been a downtown Salisbury fixture since 1987.

It could be a scene from a movie: A little town with a big heart pulls together to save a beloved restaurant.

But it’s real life, and the restaurant in trouble is Sweet Meadow Cafe, a downtown Salisbury institution for 30 years.

Heather Teeter, who co-owns the restaurant with her husband, Scott, confided in her good friend Ashley Jo Farmer that they owe $15,000 in business taxes by the end of April — or the doors will close.

“We hit a rough spot,” Heather said. “We wanted to take care of our employees. Things have a way of snowballing. We were digging ourselves out when we got a tax notice — and that was the straw that broke the camel’s back. We had to raise an enormous amount of money by the end of the month or shut down.”

Farmer, a local musician with the Billy Jonas Band, simply wouldn’t hear of it.

“I’ve known Heather for 20 years,” she said. “We raised our children side by side. One of the reasons I felt compelled to help is that I have never seen Heather not know what to do.”

So Farmer got on the phone with Joe Girdler, a local videographer.

“I knew he cared about Sweet Meadow,” she said. “I said, ‘We have an emergency, and you have to come over here right now.’ He dropped everything and came. I had decided to do a fundraiser on the internet, and Joe offered to make a video. He donated the entire thing.”

Farmer uploaded the video to a Gofundme page, which launched early Saturday morning.

“We had surpassed our halfway mark by Monday,” Farmer said. “In two days, we made half the goal.”

In four days, some 90 people had contributed to the Help Us Save Sweet Meadow Cafe. Now, two-thirds of the money has been raised.

“Some people gave $100 and some gave $1,000, and others gave $20,” Farmer said. “It’s just what they can afford. And every penny is appreciated. We are shocked it has come this far this quickly.”

They’ve heard from people all over the country, Farmer said. “That’s how popular this restaurant is. It’s been here for 30 years, and you tend to want to hold on to it.”

Teeter has been associated with the restaurant for 20 years, having worked for the original owner. Seven years ago, she and Scott bought Sweet Meadow. It moved to its current location, 111 N. Main St., in 2015.

The Teeters found out firsthand just how caring the community can be in September, when they hosted a fundraiser and raffle for a longtime employee who was facing serious surgery. Thanks to local businesses, customers and others, the Teeters raised $3,500, which covered the employee’s rent and utilities during the surgery and recuperation. That employee is back at work and doing well.

“It’s easier to be the one who helps rather than the one who asks for help,” Teeter said. “It’s incredibly humbling. The town thought our restaurant was worth saving.”

“This is the best restaurant in Salisbury,” Kim and JJ Fahs wrote on the gofundme page. “Farm-to-fork, creative recipes, extensive craft beer selection, knowledgeable and personable wait staff. Heather and Scott have contributed much to Salisbury. Let’s give back!”

“Love you guys and hope you will keep going,” wrote Maia Smith, owner of Maia’s Fashions, located one block away on South Main Street.

“Memories. Every time I visited my daughter at Catawba, we had lunch here,” wrote Elise Pryor-Harden.

“Love and best wishes from Across the Pond,” wrote Mary and Andy Walker, local bed and breakfast owners.

“Sweet Meadow is one of the jewels of downtown,” wrote Ben Fisher.

So many more sweet comments have encouraged the Teeters.

A recent morning found Nye Hartwick and her daughters, Ziggy, 4, and Chloe, 3, among the first lunch customers.

“We’re having a girls’ day,” Hartwick said. “We come here about once a month for lunch. The girls love it.”

“Everyone is so friendly,” Hartwick said. “The girls each have a side order of bacon and a plate of fruit. This is their favorite restaurant.” Teeter said she and Scott are looking for ways to strengthen their business plan and increase revenue, including selling soups, quiches and dressings at the Farmers Market — a longtime request by customers.

They’d also like to see an increase in their dinner business. Sweet Meadow is open from 5 to 9 p.m. Thursday-Saturday for dinner. Lunchtime hours are 11 a.m.-3 p.m. Tuesday-Saturday.

The restaurant has a solid following for Sunday brunch, from 10:30 a.m. to 3 p.m. Reservations are encouraged, Teeter said. “Once those church bells ring, boy howdy!”

Teeter has seen more traffic in the restaurant the past few days, she said. “This fundraiser has reminded people about us.”

“People have memories here and they don’t want to let go,” said Farmer.

To find out more, visit www.gofundme.com/sweetmeadowcafe.