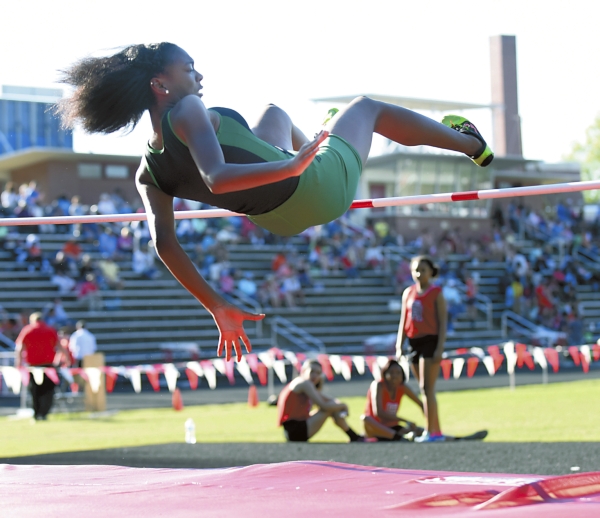 North's Lakayla Birst in the high jump. photo by Wayne Hinshaw, for the Salisbury Post Carson’s McKenzie Gadson in the long jump. photo by Wayne Hinshaw, for the Salisbury Post

The signature race for the Cougars was turned in by sophomore McKenzie Gadson. She came from behind, bolting down the track as the anchor person on the winning 4×100 team. The basketball star followed Malia Hughley, Brianna Hargrove and Maci Cooper, three freshmen.

“I don’t usually run the 4×100 and I didn’t really want to run it today,” Gadson said with a smile. “But the coaches told me that race might make all the difference, so I said, ‘Well, all right, I’ll try.'”

Gadson already had turned in a stunning long jump, soaring past the 18-foot mark to defend the title she won as a freshman. She’s been jumping in the 15s this season.

“My twin sister (Mikaila) and I went to practice over at Livingstone yesterday and we worked with one of the jumpers there,” McKenzie Gadson said. “Both of us really improved our technique. The length of our jumps was a lot different today.”

McKenzie wasn’t awarded an MVP, as her magnificent efforts were divided between sprints and field events, but she was second in the 100 and 200 to amass 26 individual points, plus the relay win.  Her sister was outstanding as well. Mikaila, who long-jumped 17-3.25 for second place, had a third and fourth in the sprints and contributed 18  individual points.

Hargrove won the pole vault. Taylor Wiggins chipped in with 14 points with a third and a second in distance races. Cooper had a second in the triple jump, while Olivia Gabriel got second in the 800. Maddie Pait took silver in the high jump, and on and on.

Carson’s depth was able to hold off supreme individual efforts.

East’s Faith Faller, who missed the cross country season with a foot injury, announced her presence with authority by dominating the distance events. She won the 800, 1600 and 3200, no easy feat as there’s not a lot of recuperation time between the 800 and 3200.

“It’s been a lot of work to get back out there,” Faller said. “But today was definitely satisfying.”

North’s Payton Russell, who will sign soon with North Carolina A&T, won the county title in the 100 for the third time, and the 200 and 400 for the fourth time on her way to another Sprints MVP Award. She also ran a blistering first leg for North’s winning 4×400 team.

North’s Chevy Blaire was the Field MVP. She swept the throws, winning the county championship in the shot put for the third time. She also took her first discus title with an effort of 115 feet, 1 inch  that far exceeded her seed mark.

West also had a double winner. Destiny Shaver swept the hurdles, repeating in the 300 and taking the 100 for the first time.

South got an early win in the 4×800 as Madison Lowery, Bailee Elliott, Belen Fierro and Madilyn Jones rolled in a school-record 10:59. The Raiders’ Makina Toler, a sophomore, successfully defended her country triple jump title.

East’s Faller got help from thrower Iyahnnah Neal, who had two seconds for 16 points, and hurdler Katie Barnes, who accounted for 15.

Heavenly Robinson had two thirds in the sprints for North for a dozen individual points.

Freshman distance runner Leah  Cressler had a second and two fourths to account for 80 percent of the scoring for Salisbury.

But Carson used the same plan that East employed to win the boys championship — a lot of points from a lot of people.

“We don’t have the superstars, but we had an awful lot of seconds and thirds today,” said Les-Lee Efird, one of Carson’s coaches. “Everyone pitched in. Everyone contributed. It seems like we’ve been finishing second for years, so maybe we were just due.”

By Mike London mike.london@salisburypost.com SALISBURY — West Rowan’s Caleb Mauldin goes to a school that has produced many of the legends... read more