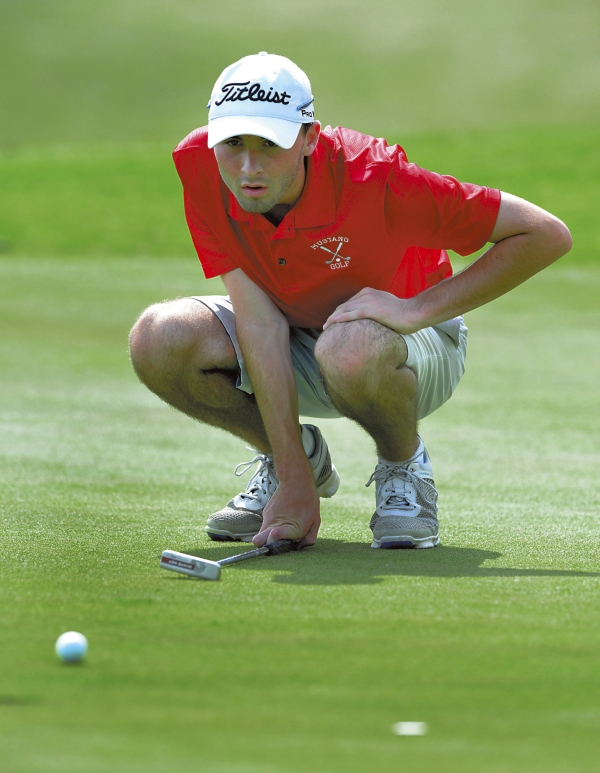 Wayne Hinshaw/for the Salisbury Post ... East Rowan’s Nick Lyerly reads a putt during Wednesday’s SPC Tournament at Warrior Golf Club in China Grove. Lyerly shot a 5-under par 66 and led the Mustangs to the team victory as well. CHINA GROVE —If this is the middle of April, East Rowan’s redemption tour must already be in full swing.

The Mustangs, second in the 3A state golf tournament the past two years, have dubbed this season “unfinished business.” They took a step toward a potential championship Wednesday at the Warrior Golf Club, where they cemented their grasp on the South Piedmont Conference by winning a third straight conference title.

“I love these guys. I’m proud of them,” coach Rhett Teems said after East (303) out-stroked nine conference foes. “A couple of them struggled today, but they all made putts and shots when it counted.”

In what was essentially an individual tournament, no one was better than East senior Nick Lyerly — the only golfer below par with a five-under 66. He birdied four of the first five holes and finished with seven in a runaway performance.

He is the Tarheel Youth Golf Association’s top-ranked junior golfer in the state, and he played like it yesterday.

“The course cooperated with me,” said Lyerly, now a two-time conference Player of the Year headed to UNC-Greensboro in the fall. “I got off to a hot start and sort of put it on cruise control the rest of the way. Our team was already going to regionals, so I didn’t want to come out here and completely blow up and embarrass myself. I wanted to come out, shoot a solid round and finish off the conference year right.”

He needn’t have worried. Lyerly, winner of the prestigious North Carolina Amateur last summer, isn’t the best thing since Wonka bars, but he’s close. He was most impressed with a shot he took on the par-5 fourth hole.

“I had an eagle putt that hit the back of the hole and kind of rolled around and sat on the front lip,” he recalled. “I ended up with a tap-in birdie. Just an unlucky bounce here and there.”

On the par-4 10th hole, Lyerly sent his drive into a rough and dug, then pushed his approach 20 yards beyond the green. He chipped back onto the green and made a seven-footer for par.

Disappointed but not distraught, he birdied the next three holes.

“That’s Nick,” said junior teammate Bryson Sprinkle. “He’s a heck of a golfer. Without him, we wouldn’t have won all these matches.”

Sprinkle carded a 78, but was exactly turning cartwheels. “I had to grind it out,” he explained. “There was one really bad hole (No. 10), when I triple-bogeyed. I hit an OK drive, then hit it over the green and couldn’t recover. From then on I was just trying to make a few pars and get back to the clubhouse.”

The surprise finisher for East was junior Will Peeler, who fired a better-than-expected 78.

“I’m loving me some Will Peeler,” said Teems. “He grinded it out today, maybe had some bad holes, but he never gave in. He normally shoots in the low 80s, so for him to break 80 was big for us. He gave us exactly what we needed.”

Other East scorers were Austin Miller (81), Will Garland (83) and Ethan Mastro (104). South Rowan (315) finished third yesterday but claimed second place in the conference based on total strokes. The Raiders were paced by Pfeiffer-bound senior Parker Chavis, who birdied two holes and finished with a 75.

“I had two bad swings all day,” Chavis said, referencing a triple-bogey on No. 14 and a double-bogey on 16. “On 14, I was trying to make a layup but didn’t stick it. On 16, I picked the wrong club and hit it right over the flag. Everybody watching thought it was perfect, but it was just a little long.”

“The first time I ever saw Andrew Coward on the golf course, I said, ‘That kid can play.'” said Teems. “He was just a freshman, but he played like Nick when he was a freshman.”

High praise, indeed. It all bodes well for South in the Midwest Regional, scheduled May 1 at Irish Creek in Kannapolis. The Raiders, one of five SPC teams that had previously qualified, and quite familiar with the course and won the Irish Creek Invitational earlier this spring.

“And that was against the same Rowan and Cabarrus county teams we’ll see in the regional,” said South coach Steve Beaver. “We’ve been looking forward to May 1 ever since.”

Both South and East earned berths in the regional — along with Concord, Hickory Ridge and Cox Mill. Carson’s Patrick Street (77) and Zain Tucker (79) were among the SPC’s four individual qualifiers.

“I had been on a bad streak, but really played well today,” Street said after sinking birdie shots on five holes. “It was a good day to bounce back.”