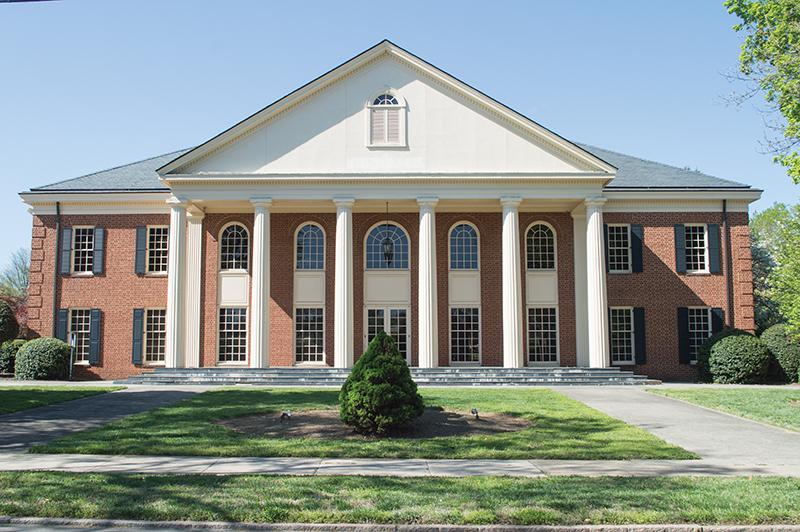 Robertson Community Initiatives won aprproval to demolish a bank building that sits on West Innes Street in Salisbury. The building was built in 1973. It's currently vacant. Josh Bergeron/Salisbury Post

SALISBURY — Plans for a downtown park don’t include a bank building that’s been vacant for years.

In 2016, the Blanche & Julian Robertson Family Foundation bought an entire city block containing parking lots, the Bell Tower, Gazebo Park, a vacant bank building and the former Wrenn House restaurant. The goal was to build an urban park on the site.

This week, the foundation will ask Salisbury’s Historic Preservation Commission for permission to demolish the bank, located at 215 W. Innes St., and two nearby parking lots, including a large one used by visitors to Rowan Public Library.

Jason Walser, a consultant for Robertson Community Initiatives, said the group was not able to find a way to repurpose the building, which takes up roughly 25 percent of the space within the block where the park is planned.

“We think having green space is the most important thing,” Walser said. “I think (the bank) was a well-designed building in 1973 that was built to blend into a truly historic block.”

He said the building is “faux historic” compared to nearby structures, such as the 1892 Bell Tower.

On Thursday, the Historic Preservation Commission will consider a demolition request from Robertson Community Initiatives. The meeting will be at 5:15 p.m. in the City Council chambers in City Hall, 217 S. Main St.

Vacant for years, the bank building was last occupied by First Bank, which maintains offices on Jake Alexander Boulevard. First Bank took ownership of the property in 2001 after the U.S. Justice Department forced First Union and Wachovia banks to sell 38 branches because of competition concerns.

The bank its within Salisbury’s historic district, which is on the National Register of Historic Places, but the Robertson request says the building is a “noncontributing structure.”

The Historic Salisbury Foundation is aware of the proposal but has not taken a position on it, Executive Director Karen Hobson said.

Walser said he’s aware of opposition to the proposal. He described it as general concern about demolishing buildings in Salisbury.

He said the Robertson group didn’t start its planning with the intention of tearing down the bank building, but including it in the park design — which has not been finalized — would be difficult.

“It was designed for a single purpose,” Walser said about the building. “It has not been maintained. The HVAC system doesn’t work well, and there are some issues with the roof.”

More than 500 people were given an opportunity to provide input on a vision for a community park at the site, the request for demolition states. The most common suggestion was “as much open space” as possible.

Robertson Community Initiatives says it will recycle and reuse materials from the bank building when possible.

Once the demolition is complete, construction of the park can begin, the request states.