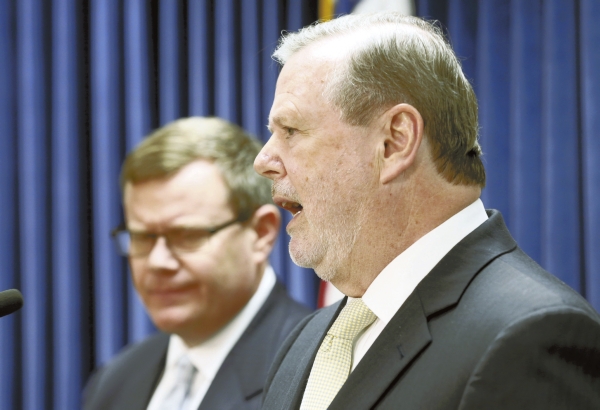 Here is something you may not know about the way the General Assembly works these days. The odds are that your senator and representative have almost no say in what happens to controversial legislation. None.

This week when the Senate considered a proposal from the House to combine the state ethics and elections commissions, taking power away from Gov. Roy Cooper, senators were banned from offering any amendments to the power-grabbing plan.

That’s because House leaders didn’t introduce a bill of their own to change the law; they simply took a bill that had already passed the Senate, stripped out its contents and replaced it with the proposal to merge the elections and ethics commissions.

That meant that after the House passed it in a party-line vote, the Senate could only agree to the changes made to the original underlying bill or reject them.

That is not illegal under the rules of the General Assembly, but it should be. It literally takes power away from every rank and file senator and the millions of people they represent.

The same procedure was used two weeks ago in the partial repeal of HB2. The Senate stripped a House bill and replaced it with the alleged compromise language so members of the House were banned from changing it at all, prevented from proposing protections of the rights of LGBTQ people at their jobs.

This is a not a new practice and historically was most often used in the last days of a legislative session when the democratic process is often abused. That’s wrong too and now the procedure is being used routinely, not under deadline pressures or end of session chaos.

It’s just the way things work, to deny most members a chance to represent the people in their districts. And it’s not only the games being played by stripping bills that is the problem.

Senate leaders will unveil their budget in the next few weeks, the legislation that will determine how more than $20 billion of public money will be spent.

But there have been very few public meetings about the budget, very little testimony from experts and none from the public about funding schools or health care programs or environmental protections.

Senate leaders are deciding all that behind closed doors in the corner rooms of the legislative buildings, where the public can’t see them and the media isn’t allowed.

A budget proposal will emerge from those backrooms, be briefly discussed before a budget committee and rushed to the Senate floor where amendments will be strongly discouraged. It will also be against the rules to take money from one agency and redirect it to the schools or reduce the tax cuts for the wealthy and use the money to pay principals more.

The budget that emerges from the backrooms will be the budget that passes the Senate, no matter what rank and file legislators think. Many of them won’t be sure of what it is in the budget when they vote for it.

When the Republicans were in the minority, they often complained about the legislative process and promised transparency if they took control.

They hold supermajorities in both chambers now. But they have abandoned their promise of an open legislative process.

They can’t be bothered with democracy or giving every senator and representative the same chance to participate in important decisions affecting every person in North Carolina.

Their power has turned to arrogance.

The last time the General Assembly was run this way was back in the 1980s when budgets were routinely written in secret by a handful of legislators and the standard procedures for bills was tightly controlled.

Republicans rightly protested and an unprecedented coalition of Democrats and Republicans overthrew the Speaker of the House in 1989.

The media was different then, with more reporters covering the legislature and more detail presented every day about the way the House and Senate worked.

But the current abuses of power have grown to the point that they are finally becoming part of every story, from the unannounced special session held in December to strip power from the governor to the bizarre spectacle of adding abortion restrictions to motorcycle safety legislation a few years ago.

Lawmakers are regularly denying most members of the General Assembly the ability to represent the people who elected them. That means millions of people in North Carolina have virtually no voice in Raleigh on the most important issues facing the state.

It is true, as Lord Acton said, that power tends to corrupt and absolute power corrupts absolutely.

But it is also true that at some point the people—and rank and file lawmakers—stand up and put a stop to it. We are at that point in North Carolina.